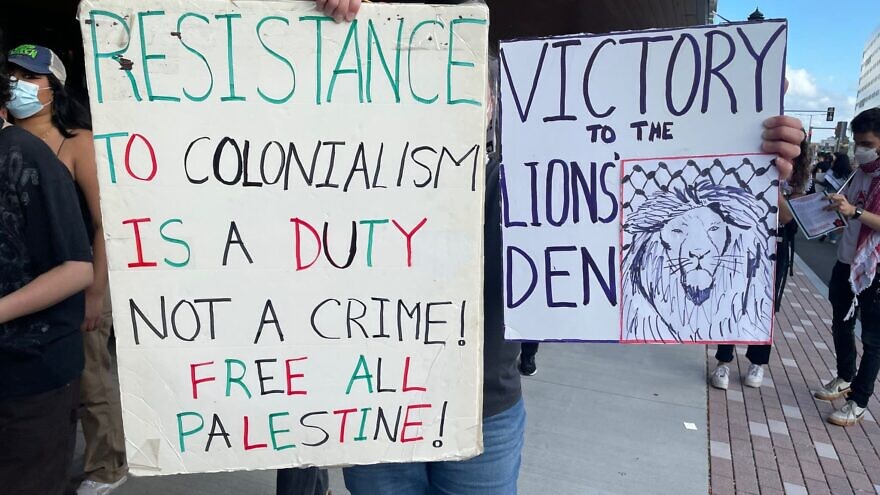 (November 10, 2022 / JNS) The anti-Semitic Mapping Project, launched by BDS Boston, led a protest calling for Jewish National Fund-USA to be shot down and for a new intifada against Israel to be launched.

The protest was held on Nov. 5 outside JNF-USA’s 2022 National Conference in Boston.

The Mapping Project, which came on the scene in June, essentially put a target on the back of Greater Boston’s Jewish community—including synagogues, a teen program and an art center—singling them out as “oppressors” responsible for a long list of societal harms.

Under the hashtag #ShutdownJNF, the Mapping Project brought together a host of anti-Israel groups in the Boston area including Students for Justice in Palestine (SJP) chapters from Tufts University, Boston University and the University of Massachusetts as well as Harvard’s Palestinian Solidarity Committee, the Canary Mission said.

Besides the chants for an intifada, posters could be seen promoting the Lions’ Den, a Palestinian terrorist group that emerged in August in Nablus. Posters also lauded Palestinian terrorist Udai Tamimi, who recently killed Noa Lazar, an 18-year-old female military police officer, and shot a civilian security guard in the head. Tamimi shot a civilian guard in a second attack before he was killed by other guards on Oct. 19.

When it set out to broadcast the names and addresses of Boston-area Jewish leaders and groups, the Mapping Project said, “Our goal in pursuing this collective mapping was to reveal the local entities and networks that enact devastation, so we can dismantle them. Every entity has an address, every network can be disrupted.”