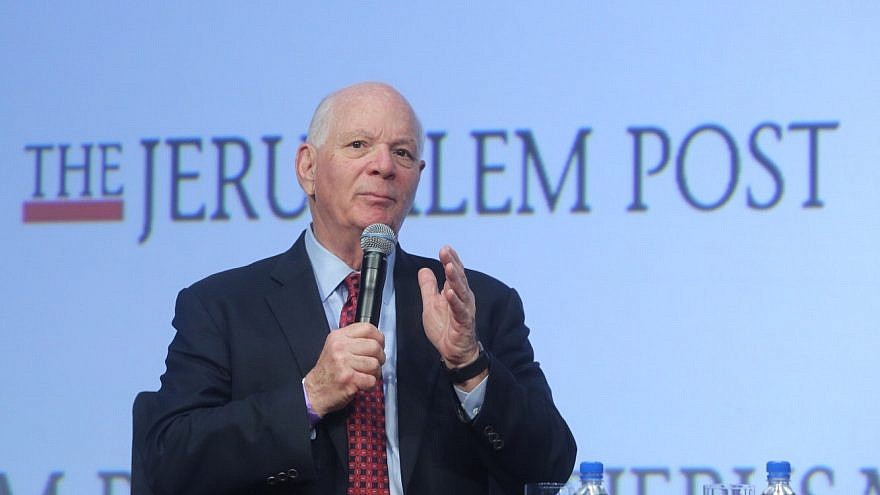 Sen. Ben Cardin (D-Md.) addressing the 2018 Jerusalem Post Conference in New York City. He said that despite efforts by some to make Israel a “political wedge issue,” U.S. support for the Jewish state is strong and bipartisan. Credit: The Jerusalem Post.
Spread the word.
Help JNS grow!
Share now:

(May 6, 2020 / JNS) Sen. Ben Cardin (D-Md.), the second-highest ranking Democrat on the Senate Foreign Relations Committee, said on Tuesday that he won’t sign a letter calling on Israeli Prime Minister Benjamin Netanyahu, and Blue and White leader Benny Gantz, not to move forward with annexing parts of the West Bank.

“I don’t like to second-guess Israel’s government’s decisions, although I have been pretty critical of a lot of policies under the Netanyahu prime ministership,” said Cardin during a webcast hosted by the Jewish Democratic Council of America.

It states that annexation “would fray our unique bonds, imperil Israel’s future and place out of reach the prospect of a lasting peace,” according to an action alert sent out by J Street on Monday.

Cardin said that while he deems unilateral annexation “not to be a helpful process” and would “encourage [Israel] to try to preserve” the position of a two-state solution, he added, “I don’t think it is helpful for us to sow dissension in the United States as it relates to the support for Israel. I think we have to show that even when we disagree with the policies of the government that the relationship between the United States and Israel must remain strong.”