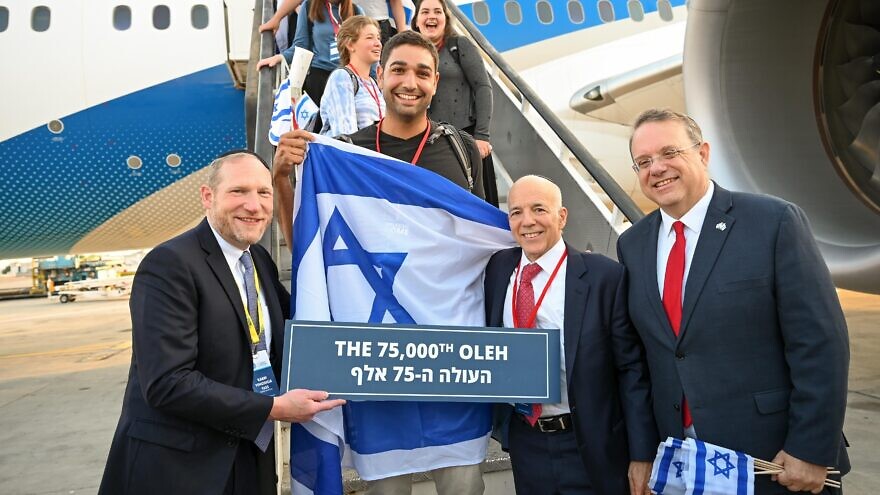 (September 12, 2022 / JNS) Twenty years ago, Jews in North America weren’t exactly getting in line to relocate to Israel. Statistics on aliyah in 2002 found that fewer than 1,000 Jews relocated to the Jewish homeland that year.

Unlike Jews from the former Soviet Union or the Falash Mura from Ethiopia, there were no outside forces propelling North American Jewry through the gates of Ben-Gurion Airport as citizens and not tourists. The concept of moving to Israel by choice wasn’t something many Western Jews considered.

There was also no one on the Israeli side eagerly embracing American Jewry. What was awaiting American Jews who had decided to live there was a frustrating bureaucracy of paperwork, a language they for the most part could not speak, and no sure way to utilize their job skills and talents to provide for themselves, their families and their new homeland.

Of those who did give it a try, nearly half returned to the United States within a few years after giving it a “really good try,” according to an article on North American aliyah in the Feb. 14, 2001, edition of the Jewish Exponent in Philadelphia.

All of which the then-nascent organization Nefesh B’Nefesh, and its founders Rabbi Yehoshua Fass and businessman Tony Gelbart, wanted to change. As the Exponent article noted, the organization hoped to make aliyah become a bit easier with the establishment of a new, private, American-based organization titled Nefesh B’Nefesh, “Jewish Souls United.”

“Funds come from individual donors, and the first grants are expected to be given out this summer, with the average compensation for a family to run around $20,000. As part of its launch, the group also plans to charter a plane to Israel this summer for its inaugural recipients.”

A little more than 500 people made aliyah on the very first Nefesh charter flight. Among them were Laura Ben-David and her family.

“We were there from the start. It’s pretty incredible,” said Ben-David who described herself as always “Israel-oriented.”

“Aliyah then wasn’t normalized. It wasn’t like it is now; everybody knows people who made aliyah, not just people who live in Israel,” she said, adding that “Nefesh B’Nefesh made [it] cool.” 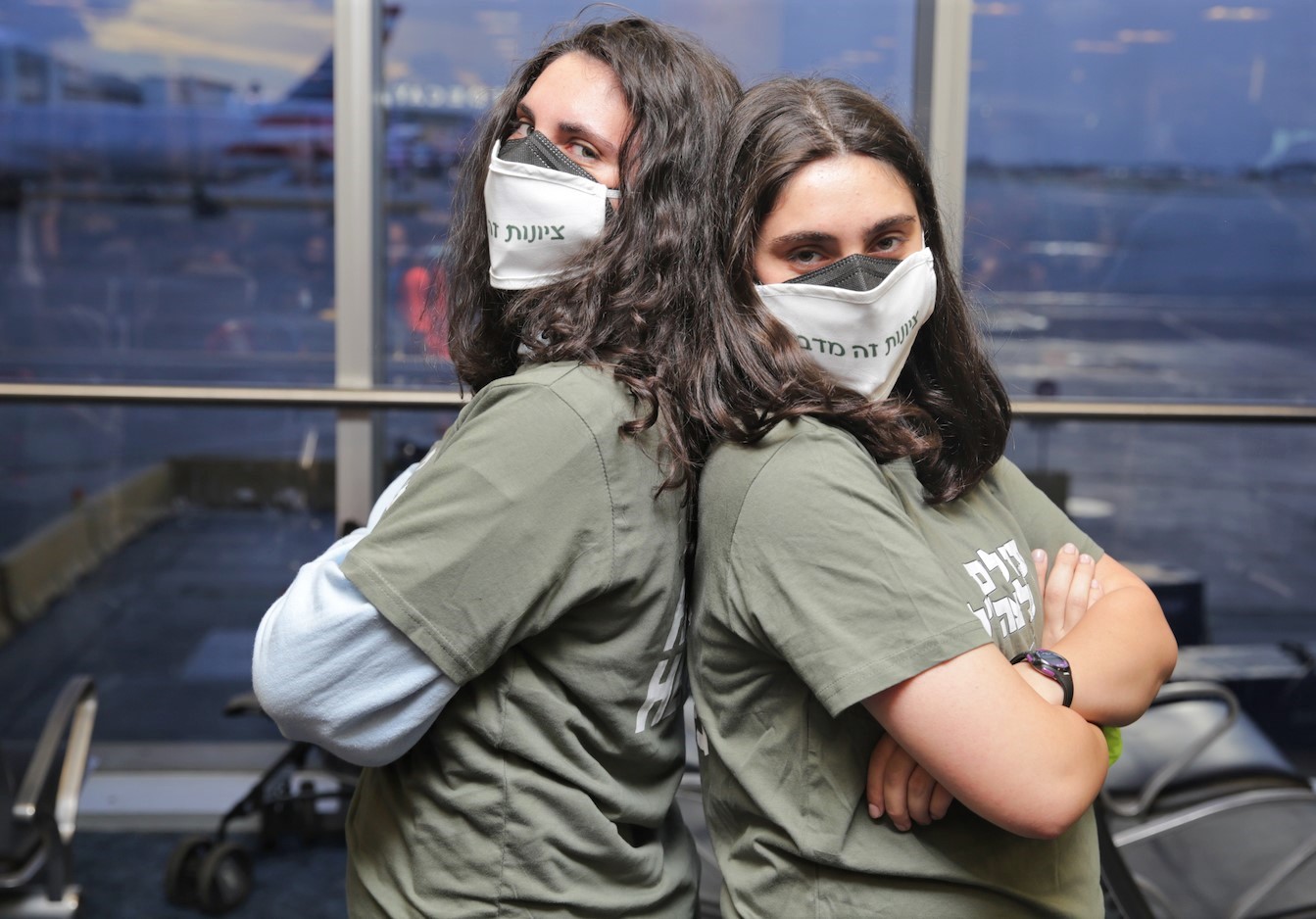 Twin sisters Ziv and Noam Wahba from the U.S. state of Georgia at Miami International Airport before their “aliyah flight” to Israel, Aug. 10, 2021. Photo by Yonit Schiller.

Fast-forward to August 2022, Nefesh B’Nefesh has become a game-changer in enabling Jews from North America and other areas to resettle in Israel. In fact, the Jewish Agency for Israel believes that Nefesh B’Nefesh put aliyah on the agenda of the North American Jewish community.

While the pull of Zionism—of Israel as the Jewish homeland—is a draw for many, making the move has become easier in recent years, particularly after two years of a pandemic and months of lockdowns.

“We had always thought about making aliyah, but COVID showed us that remote work is possible, and we thought maybe we can make this happen,” said Zehava Stemp, as she waited in line with her husband, Daniel, and their five children, ages 1½ to 9, waiting to board Nefesh’s 20th-anniversary charter.

They were not alone. According to Yael Katsman, public-relations and communication director at Nefesh, intake surveys of new and prospective new immigrants (olim) since the pandemic, showed that many “saw that employment opportunities were greater now that the hybrid lifestyle became more widespread and viable.” Also, she said, people “grew more accustomed” to living farther away from family but still able to remain connected and even close, thanks to advances in technology.

Conversely, the other trend fueling aliyah is family following family.

That was the case for Rita and Gabriel Grumer, retirees from Dover, Del., who made aliyah on the 20th-anniversary charter flight.

Gabriel Grumer was born in Tel Aviv, but his family moved away when he was just 6 years old. Now at age 69, he and his wife, who grew up in the Bronx, N.Y., are moving to join their younger son, his wife and grandchild who live in Jerusalem.

“I have very little concerns,” he said. “It’s a different culture and a different way of living, but last year we spent 2½ months there, and we loved it. We felt like we were home.”

His wife agreed but went on to acknowledge that there will be some challenges like going to the supermarket and dealing with the bureaucracy. “You need to have patience,” she said.

‘Feel involved and that people care’

According to Nefesh’s internal surveys, 90% of those who make aliyah with the organization remain for at least three years and are helping to spur growth in the Jewish state.

According to an audit by Deloitte on the “Economic Impact of Nefesh B’Nefesh Olim on the Israeli Economy,” those who come from North America “contribute significantly to Israel’s economy.”

“This is primarily due to the demographic characteristics of the olim: their level of education and employment,” the audit stated, and “their unique characteristics in the fields of innovation and medicine.”

The research found that 65% of North American olim come with a bachelor’s degree or higher level of education, and 35% of them work in one of four industries; education, nonprofit, health and technology.

As with any organization, Nefesh has continued to evolve over the years. For instance, the aliyah grants that were awarded in the organization’s early years are no longer offered because people were continuing to come regardless of the aid. Those funds are now being utilized in “various, different, essential ways,” according to officials with the organization.

Another major change has been the creation of a permanent space to serve as a communal hub for new arrivals. Located just over a walking bridge from Israel’s Supreme Court, the Nefesh B’Nefesh Marcus Foundation Aliyah Campus is a modern facility that serves as an “embassy of sorts, where olim can come and feel involved and that people care,” and where the agency can “unify our contributors” under one roof and to “express ourselves,” explained Fass.

Noting that Jews of every background—Ashkenazi, Sephardi, students, soldiers, religious, secular, young, old—join together on Nefesh’s flights—something that is a rarity in Israel, Fass believes that the building can serve as a bridge and place where such unity is evidenced each day through events and programming.

Already, it has been used as a wedding venue for lone soldiers, hosted regular Shabbat dinners for olim and students from local yeshivahs and seminaries, workshops and more. 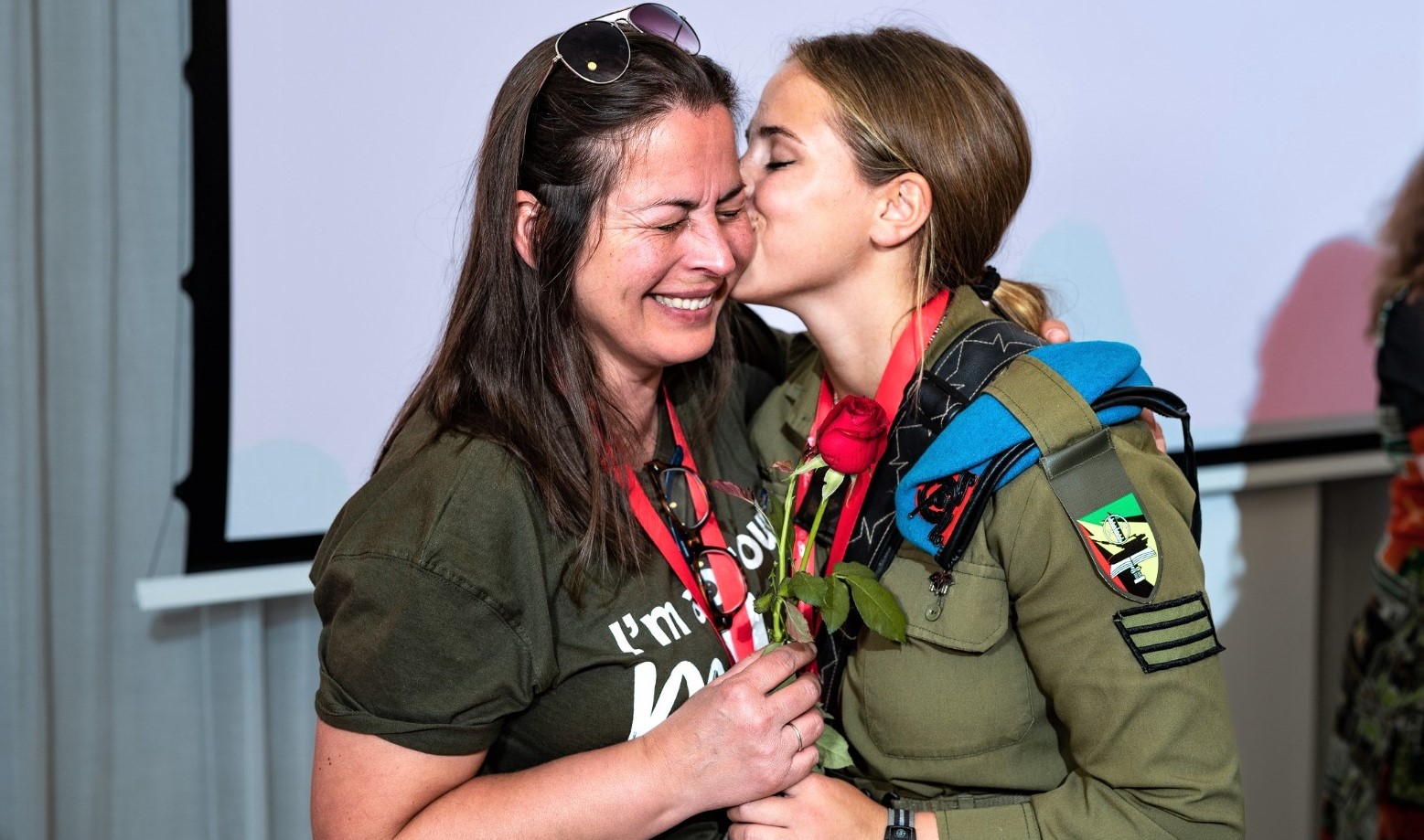 The mother of a lone soldier reunites with her daughter, who currently serves in the Israel Defense Forces, during a trip with the global movement Momentum at an event hosted by Nefesh B’Nefesh in Jerusalem on July 8, 2022. Photo by Aviram Valdman.

The success of Nefesh B’Nefesh, which employs 100-plus people, doesn’t belong to the agency alone. Officials are quick to point out the partnerships they have formed with Israeli organizations and agencies, among them the Israeli Ministry of Aliyah & Integration, the Jewish Agency for Israel, Keren Kayemeth LeIsrael (KKL), Jewish National Fund-USA and Tzofim-Garin Tzabar are what have made the process smoother.

Joint initiatives have included Keren Kayemeth LeIsrael, the “Go Beyond” initiative, which encouraged residents to the periphery of the country—both north in the Galilee and south in the Negev—and provided them with services, grants and resources to do so. Another joint program was the MedEx partnership with the Israeli Ministry of Health, which streamlined the process for medical professionals to obtain proper credentials and certifications to work in Israel.

The Jewish National Fund, meanwhile, has partnered with Nefesh on a number of initiatives such as creating a Nefesh hub in Tel Aviv that serves as a workspace and venue for new olim; as well as JNF-USA’s Lauder Employment Center, which helps olim find job opportunities in the Negev and Galilee. 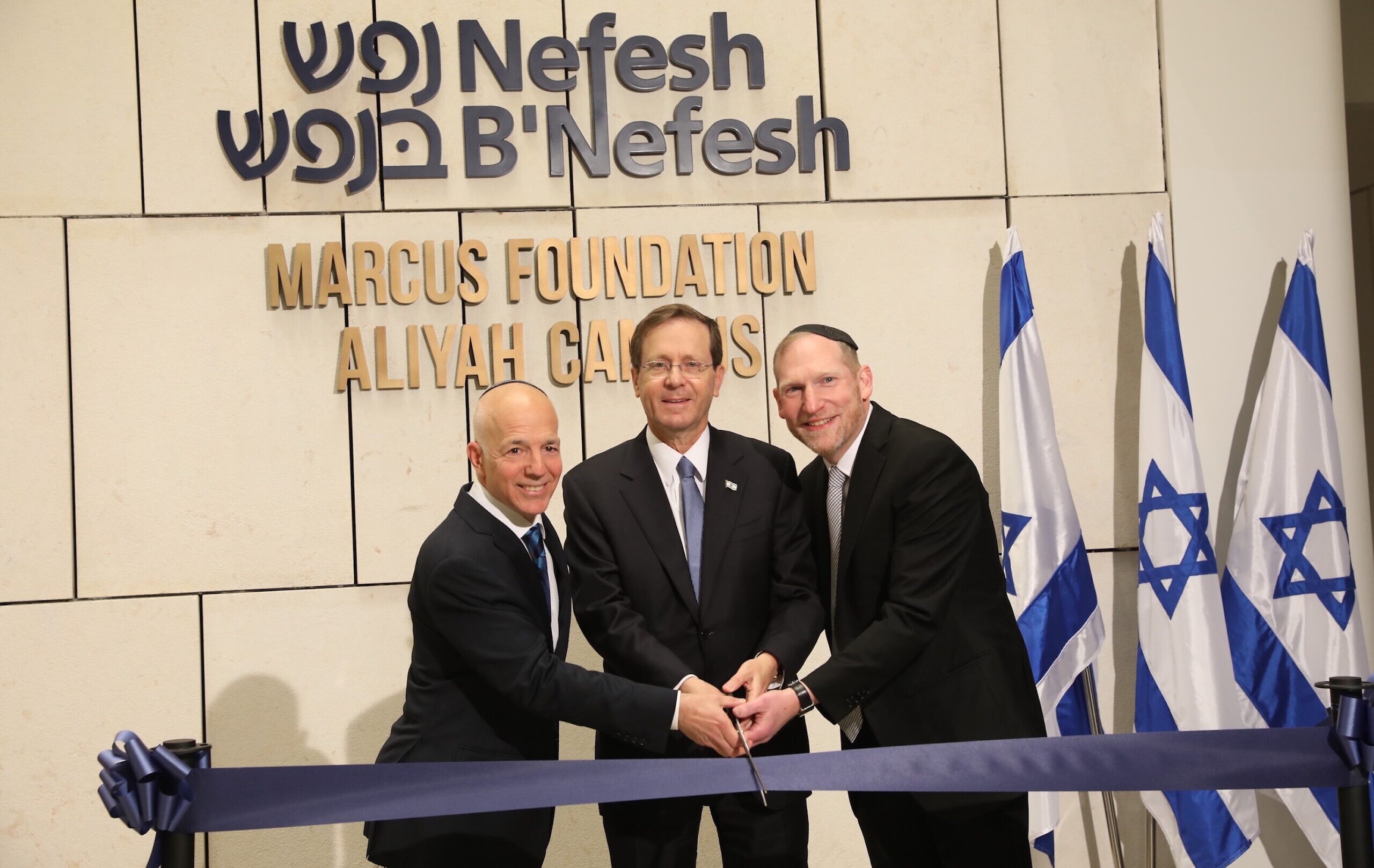 The groups work so closely together that the Israeli Ministry of Interior stores equipment in the Nefesh building enabling them to process new olim there. The ability to do so on a grand scale was put to the test earlier this year when tens of thousands of Jews from Ukraine and Russia arrived in Israel seeking citizenship and safety from their war-torn homes after Russia invaded on Feb. 24.

“The partnerships that Nefesh B’Nefesh has established are critical in ensuring that olim are able to easily integrate and excel in Israeli society following their aliyah,” said Katsman. “We work incredibly closely with our partners, as well as various governmental offices and agencies to advance changes in policy and legislation for olim.”

It is, she continued, “a holistic approach” that ensures everyone from different areas is “working together with us under one unified roof to ensure a streamlined aliyah process.”

The Jewish Agency says it has a solid and important partnership with Nefesh B’Nefesh, noting that they complement each other to the benefit of Israeli society given the impact new immigrants have on the economy, culture and more.

With 75,000 olim and 20 years of experience—not to mention a new central locale that hosts programs, Shabbat dinners, educational opportunities and more—the question is does Nefesh B’Nefesh need to do more; more to help those who have already made aliyah, those who are considering moving to Israel and more to fully integrate the immigrant Israeli population and the native Israeli population.

The future is unlimited.

Said Nefesh co-founder Gelbart: “We started out to help people fulfill their dreams to make aliyah—that was the goal. From our first charter to our 63rd charter [in August] and all the 75,000 olim in between, we thank God for what we’ve accomplished. We are not stopping. We are just beginning.”

Faygie Holt was a guest of Nefesh B’Nefesh as part of the 20th-anniversary and 63rd charter flight of NBN.