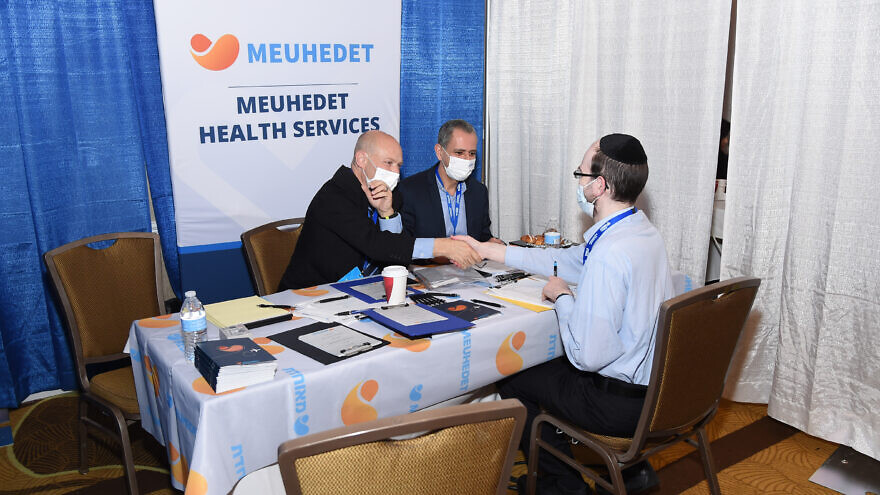 During the program, the 325 participants were able to meet with representatives of medical facilities in Israel to discuss job opportunities, get their paperwork filed and notarized, and expedite their medical-licensing process, March 2022. Photo by Nir Arieli.
Republish this article
1054 WORDS
Spread the word.
Help JNS grow!
Share now:

(March 31, 2022 / JNS) Medical professionals planning to move to Israel gathered this week for the MedEx aliyah event held at the Teaneck Marriott at Glenpointe in New Jersey and sponsored by Nefesh B’Nefesh, with cooperation from the Jewish Agency for Israel, the Jewish National Fund, Keren Kayemeth LeIsrael and Israel’s Ministry of Health.

During the program, the 325 participants—many carrying framed certificates and tote bags full of paperwork—were able to meet with representatives of medical facilities in Israel to discuss job opportunities, get their paperwork filed and notarized, and expedite their medical-licensing process.

Among those in attendance were Lewis and Ilona Dennen of Baltimore. The parents of three teenage girls came to the conference so Ilona could have her pharmacist’s license transferred.

“I want to be prepared,” she said, even though they don’t have an aliyah date just yet. The couple had taken a pilot trip to Israel in 2019 and is interested in moving to Zichron Yaakov, just south of Haifa.

Dennen, who was born in the former Soviet Union, said that she’d like to remain in her current industry, though being a pharmacist is not the same in Israel as it is in America.

Dr. Michael Landsman and his wife, Marci, are also from Baltimore and planning to make aliyah this year. The couple has a home in Efrat; their daughter and four grandchildren already live in Israel.

“We were supposed to go 20 years ago,” said Landsman, a neo-neonatologist. While it didn’t happen then, it is now, even if it means commuting to work for a bit.

“I’m at the tail end of my career, and looking to go back and forth for a few months for work,” he said, adding that he’s not sure about his employment prospects after that; still, he noted that he’s already been contacted by colleagues about opportunities in the Jewish state. 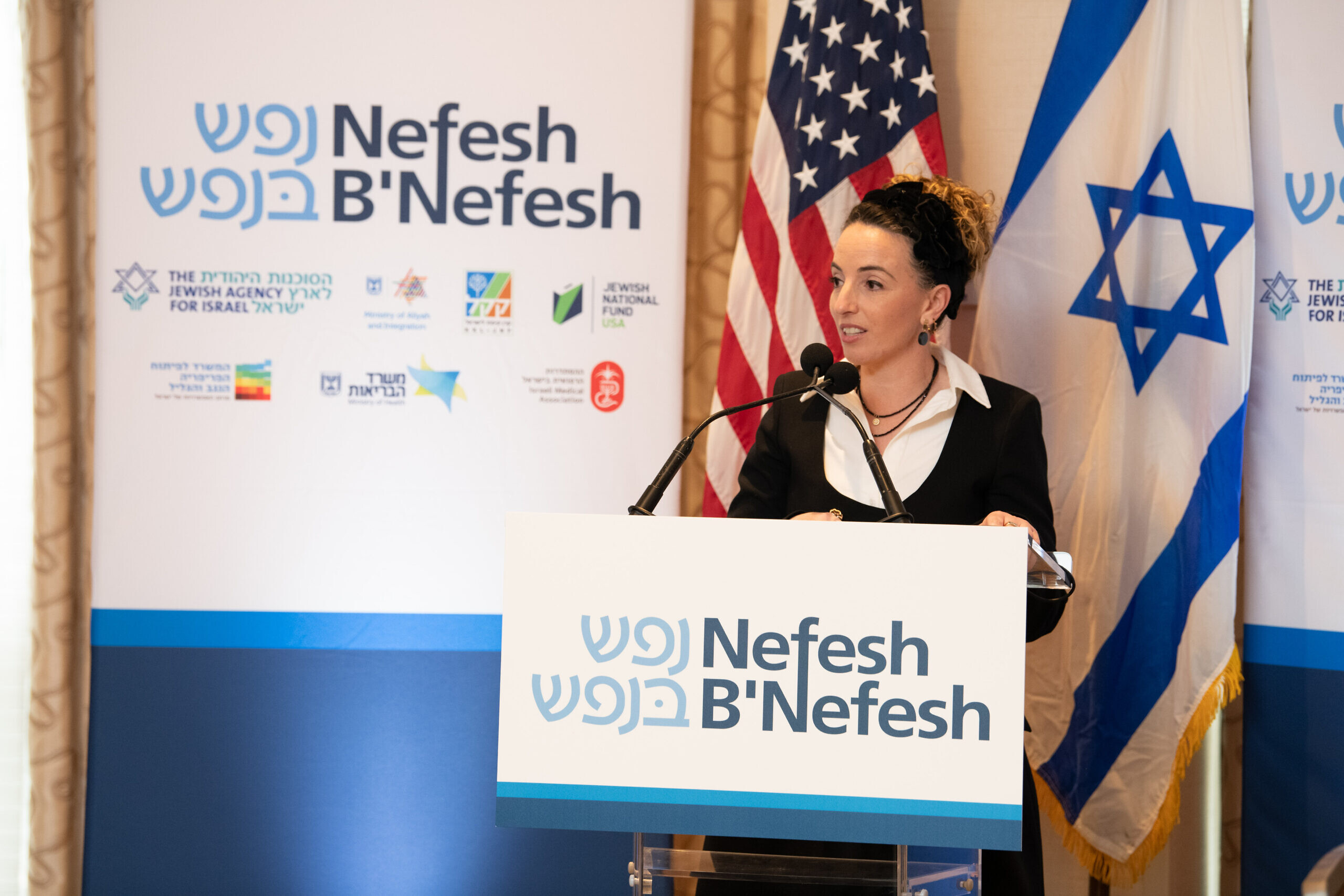 Knesset member Idit Silman, leader of the coalition and chairwoman of the Knesset Health Committee, addresses health-care professionals at the Nefesh B’Nefesh MedEx in Teaneck, N.J., on March 27, 2022. Photo by Nir Arieli.

‘Open to the possibilities’

Unlike other NBN events that are broader in scope and may be attended by people in many different fields and stages of interest in aliyah, MedEx is only for medical professionals who are planning to move to Israel in the next year or two, according to Allison Levine Speiser, employment adviser and medical licensing liaison for Nefesh B’Nefesh.

To ease the transition for health-care professionals, NBN is piloting a “medical ulpan” program so they can get grounded in Hebrew terms unique to their careers, said Levine Speiser, saying, “I have a friend who is a doctor at Soroka Hospital. He can’t talk to you in Hebrew about sports or meet with his kids’ teachers—his wife does that—but he can speak ‘medical’ Hebrew and treat patients.”

Beth Boncher is a nurse in Houston, who is planning to make aliyah in May after her previous plans were derailed by COVID. Her mother, Leah, already lives in Israel, having settled in Jerusalem some five years ago.

“As a single person, any move is hard unless you have a support system,” she said, “which is why I’m going to stay with my mom for a while. I don’t know where things will lead me in the future, but I’m open to the possibilities.” 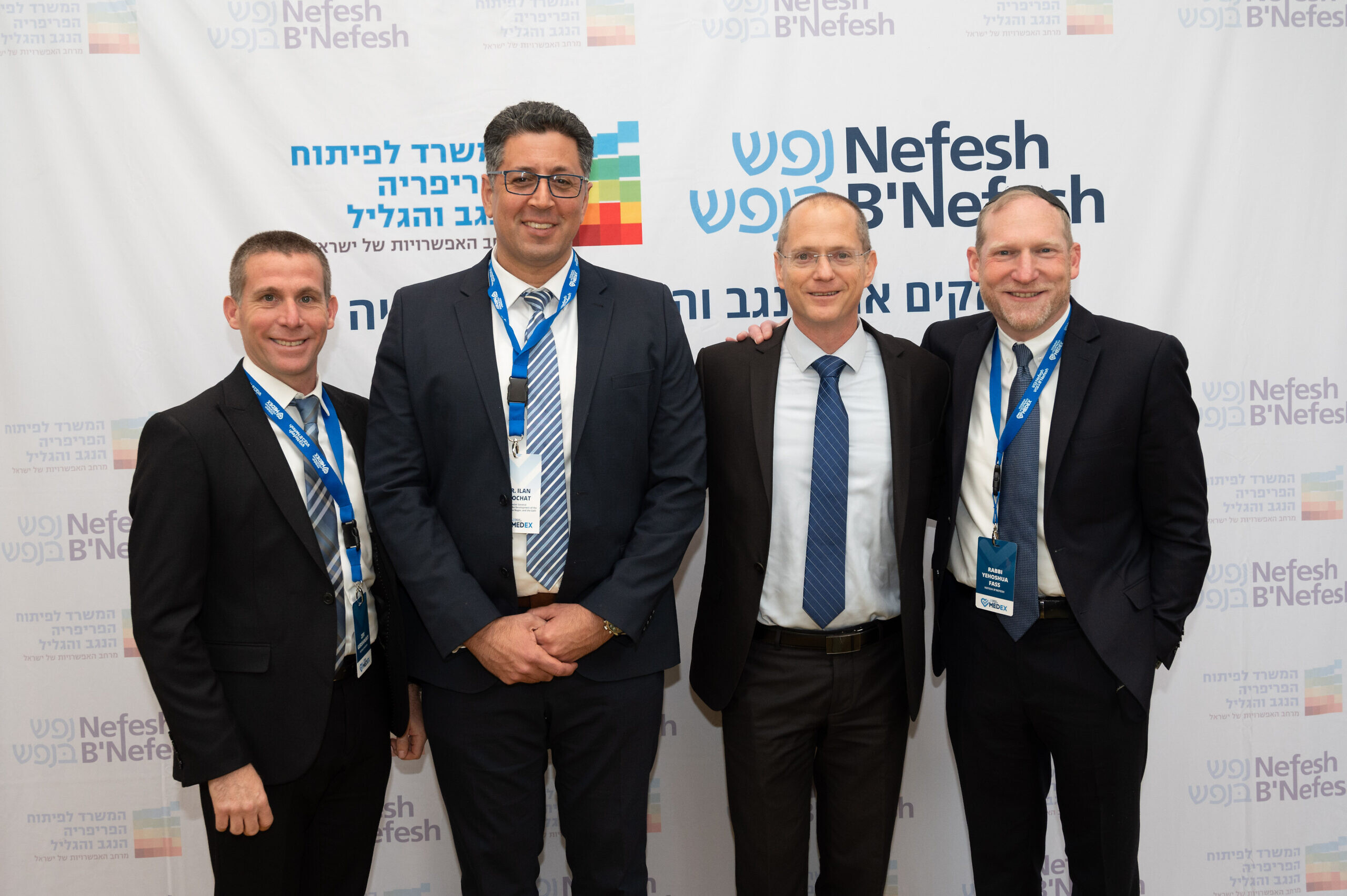 From left: Zev Gershinsky, executive vice president of Nefesh B’Nefesh; Ilan Shochat, director-general of the Ministry for the Development of the Periphery; Oded Forer, minister for the Development of the Periphery, the Negev and the Galilee; and Rabbi Yehoshua Fass, co-Founder and executive director of Nefesh B’Nefesh at the MedEx event on March 27, 2022, in Teaneck, N.J. Photo by Nir Arieli.

The one thing she absolutely does know for sure is that “I want to be a nurse in Israel. I just feel it’s where I’m supposed to be.”

Mark and Miriam Rothman were in attendance from Toronto. A psychologist, Mark was getting help with the licensing process, which he said is “quite an ordeal.”

The couple, whose adult children and young grandchildren live in the United States and Canada, has already purchased an apartment in Harish in northern Israel, in the Haifa district. They were drawn by the Jewish community’s welcoming and “eclectic” style, as well as the affordability of the region.

“I have wanted to make aliyah for a very long time,” said Mark Rothman. But with patients in Canada that didn’t seem possible. However, said Miriam Rothman, “the pandemic has shown he can work virtually, and that has a made a huge difference.”

That they are moving north is likely great news to Oded Forer, Israel’s minister for the development of the Periphery, the Negev and the Galilee, who attended the event and spoke about the benefits of moving to a community that is not in the mercaz, or “center” of the country.

Noting that the COVID-19 pandemic highlighted a lack of medical professionals in Israel and around the world, Forer said “in the Negev and the Galilee, the lack of medical professionals is much more visible than in the center. I need to help them get the best manpower they can. What we are trying to show is that they can have a better life in the Negev and the Galilee.”

That better life includes a lower cost of living than in the middle of the country, which includes cities like Tel Aviv, Modi’in, Ra’anana and Jerusalem. Absorption is often easier outside the main cities, too, as new immigrants, especially those in the medical field, remain in high demand.

“Mayors are fighting over the immigrants,” he said, adding that “the State of Israel invests a lot of money in the Negev and Galilee.”

Dr. David Peleg, a physician who deals with high-risk pregnancies, attended the event on behalf of Ziv Medical Center in Tzfat. He is hoping that some of the professionals moving to Israel will consider the northern communities—“there are Anglo communities around Tzfat, the Galilee and the Golan,” he said—noting that even one new doctor signing up could make a difference.