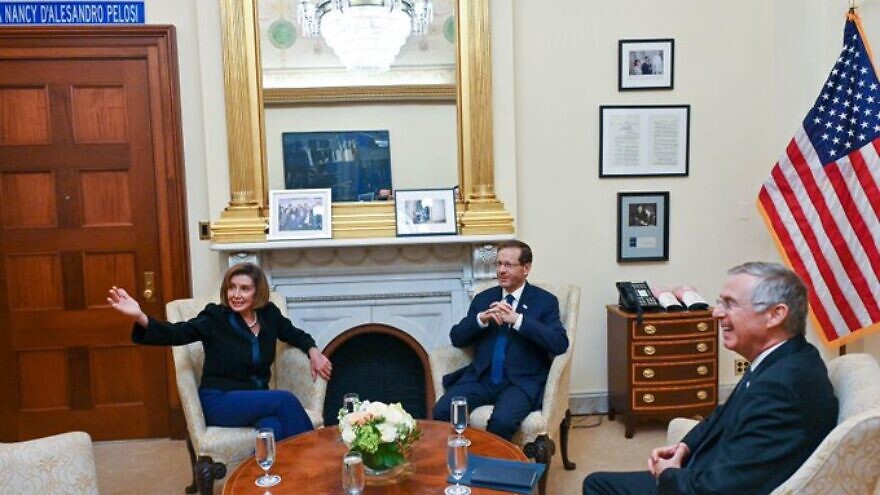 (October 26, 2022 / JNS) With both Israeli and American elections looming, Israeli President Isaac Herzog met with an array of audiences on Tuesday in Washington, revealing evidence of Iranian involvement in Ukraine and hailing Israel’s role in a number of regional accords.

Among those Herzog met on Tuesday was U.S. Senior Advisor for Energy Security Amos Hochstein Hochstein, the administration’s mediator in the Israel-Lebanon maritime border negotiations. Herzog and Hochstein discussed the details and terms of the border agreement which is set to be signed this week. Herzog then held an audience with dozens of leaders from the American Jewish community, before a sit-down with U.S. Secretary of State Antony Blinken.

Blinken hailed the success of the Abraham Accords normalization agreements between Israel and several Arab states, and said that the administration has been working to build on them.

“The work that we’ve been doing to try to deepen and expand the Abraham Accords, the normalization of Israel’s relationship with its neighbors and with countries even beyond its immediate neighborhood, is important and powerful, and we’re committed to doing that,” Blinken told Herzog.

The secretary of state also called for a de-escalation of tensions and violence in Judea and Samaria, amid ongoing Israeli counter-terrorism operations there.

Turning to the topic of Iran, Herzog expressed solidarity with Iranian protesters, and said during his visit he would be presenting evidence to Biden administration officials of Iranian weapons being used by Russia in its ongoing invasion of Ukraine.

“We will be discussing the challenges that Iran poses to us and to humanity at large,” said Herzog. “Our hearts go out to the people of Iran. The women of Iran are oppressed and attacked day in, day out, and I will be exposing more of the fact that Iran—that the Iranian weapons are used against civilians, innocent civilians in Ukraine.

At an Atlantic Council event on Tuesday marking the two-year anniversary of the signing of the Abraham Accords, Herzog showed slides showing images of an Iranian Shahed-136 unmanned aerial vehicle (UAV) launched by the Islamic Republic in a military exercise last year, followed by a photo showing the same type of drone downed during the fighting in Ukraine.

Tonight at the @AtlanticCouncil we marked two years since the Abraham Accords, which opened up horizons of peace and partnership that looked impossible just a few years ago. The US played a central role in this paradigm shift, creating a sense of neighborhood in the Middle East. pic.twitter.com/B9f4QlUzju

The Israeli defense establishment, he said, had proved that despite Iranian denials and attempts to obscure the origins of the drones, they were certainly  of Iranian manufacture.

“Yet again, Iran has proven that it cannot be trusted, and wherever there is killing, destruction and hatred—it’s there. Iranian weapons play a key role in destabilizing our world, and the international community must learn its lessons, now and in the future,” said Herzog. “The world must speak with Iran in the same language: a tough, united and uncompromising language. As we are repeatedly discovering, for every hesitation about Iran—there is a price.”

Finally, Herzog headed to Capitol Hill for a meeting with Speaker of the House Nancy Pelosi and an array of congressional leaders.

Delighted to meet @SpeakerPelosi, a true and longtime friend of mine and of Israel’s. Coming during elections in Israel and the US, my visit to Washington is an opportunity to reaffirm that the US-Israel alliance is unshakable and above all political disagreement. pic.twitter.com/FQnmYrI1fP

Pelosi and Senate Majority Leader Chuck Schumer extended an invitation to Herzog to address a joint meeting of Congress to celebrate the “historic and joyous milestone” of Israel’s upcoming 75th anniversary.

“It is in celebration of this great anniversary for the State of Israel and in recognition of the deep partnership between our nations that, on behalf of the bipartisan, bicameral Leadership of the Congress, we invite you to address a Joint Meeting of Congress,” they said.

Pelosi and Schumer said former President Truman’s immediate recognition of Israel after it was established has been a point of pride for the United States.

“Since that landmark moment, the United States and Israel have shared an unbreakable bond rooted in common security, shared values and friendship,” they said.

The letter did not specify a potential date for Herzog’s address.

Herzog is set to meet on Wednesday with President Biden and U.S. National Security Advisor Jake Sullivan before returning to Israel.