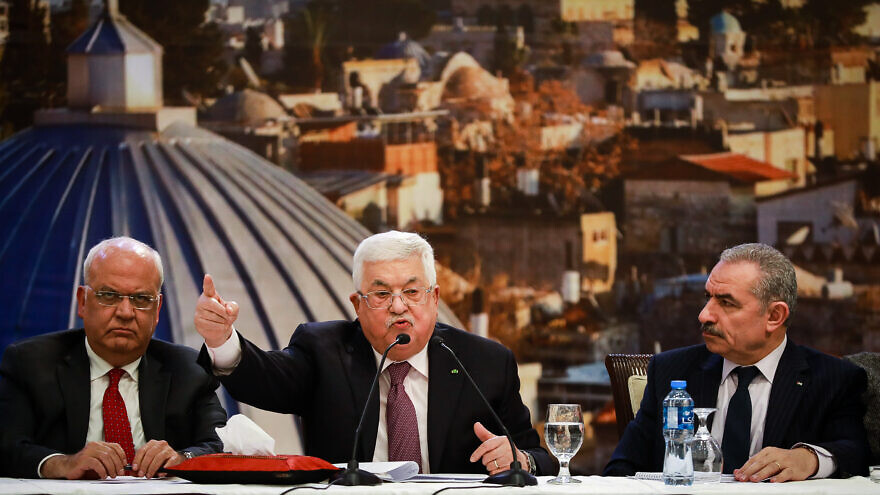 (October 22, 2020 / JNS) While U.S. President Donald Trump’s first term has been dominated by domestic issues, some of his most notable moves as president relate to foreign policy, in particular with a focus on Israel. This includes recognizing Jerusalem as the capital of Israel, moving the U.S. embassy from Tel Aviv to Jerusalem, supporting Israel sovereignty of the Golan Heights and helping to broker the recent Abraham Accords, which normalize relations between the Jewish state, and the United Arab Emirates and Bahrain.

While some of Trump’s critics acknowledge his accomplishment on these issues, including former U.S. Vice President Joe Biden, they fear that Trump has made future peace between the Israelis and Palestinians harder to achieve, especially as the Palestinians have dug in and virtually cut all ties with the United States over the above moves.

One of the most significant questions moving forward when it comes to the region is what will happen after Jan. 21, either under the continued presidency of Trump and or a possible President Joe Biden.

“The reality is the Israel-Palestinian conflict is one among many in the world and a lot less important than most. Trump realizes that; Biden does not,” former Pentagon official Michael Rubin told JNS. “For too many in Biden’s team, the peace process has become a career, and if they acknowledge they were wrong all along, they are delegitimizing their life’s work. It will be the triumph of ego above reality.”

Were Trump to win, Rubin project normalization with Israel coming from nations such as Oman in the Gulf; Morocco in North Africa; and Sudan and Djibouti to the east. Saudi Arabia has also been mentioned, though that outcome is less probable, according to news reports.

“Trump understands that there are two teams in the Middle East—one led by Iran, the other by Saudi Arabia, and that we must opt for the latter (excepting Turkey),” he said. “Biden sees the region as anarchic and deals with each country in isolation.”

Despite the differences, Biden has endorsed the Abraham Accords and promised to continue efforts to encourage Arab countries to normalize ties with Israel.

“I welcome the United Arab Emirates and Bahrain taking steps to normalize ties with Israel,” he said in a statement. “It is good to see others in the Middle East recognizing Israel and even welcoming it as a partner.”

He went on to say that if elected, he and vice-presidential nominee Sen. Kamala Harris (D-Calif.) “will build on these steps, challenge other nations to keep pace and work to leverage these growing ties into progress towards a two-state solution and a more stable, peaceful region.”

However, the next administration will likely have to deal with continued instability within the Palestinian leadership.

On the campaign trail, Biden has promised a more conciliatory approach to the Palestinians to get them back to the negotiating table. His campaign has said that Biden would restore funding to the U.N. Relief and Works Agency for Palestine Refugees (UNRWA), while also noting that he would restore U.S. funding to the Palestinians in accordance with the Taylor Force Act and reopen the PLO mission.

The former vice president has also said that he would reopen the U.S. consulate in eastern Jerusalem, which primarily serves the Palestinians.

‘Trump and Biden asleep at the switch’

But the most urgent concern in the Middle East and continued bad actor is Iran, which has rumbled threats against both the Trump administration and the West, as well as pulls the strings of its proxies closer to Israel—namely, Hamas in the Gaza Strip and Hezbollah in Lebanon. All are suffering economically, due to a combination of government failure and corruption now exacerbated by the ongoing coronavirus pandemic.

Trump has overseen a “maximum pressure” campaign on Iran that seems to have kept certain behavior in check, and which has certainly impacted its economy.

“As with Iran, however, both Trump and Biden remain asleep at the switch as transition looms in the Palestinian Authority,” said Rubin. “When a new leader emerges, will they take advantage of new opportunities, demand real Palestinian reform and set new red lines, or revert back to the same failed formulas?”

Regarding the conflict overall, he said, “the irony here is that Biden’s team is more Arab than the Arabs. The Arab world for generations allowed the Palestinians to hold their advancement hostage,” said Rubin.

In September 2018, the United States defunded all of its assistance to UNRWA, which critics say enables the Palestinian refugee issue and teaches anti-Israel material in its textbooks.

On the other hand, Richard Goldberg, who worked in White House National Security Council under Trump, told JNS that “the Trump administration has not yet changed U.S. policy on Palestinian refugees, nor has it pressed for the end of UNRWA’s mandate.”

Some question whether or not the Israeli-Palestinian dispute would continue to be a foreign policy priority for either administration.

“The Obama-Biden administration continually pressed Israel to make concessions to ‘enhance’ the ‘peace process’ with the Palestinians, believing that unless the Palestinians were satisfied, the Arab states would not enter into relations with Israel; the concessions were pocketed,” Jewish Policy Center senior director Shoshana Bryen told JNS.

On the other hand, she continued, “the Trump administration understood that the Arab states could and would move forward with Israel based on the economic and social needs of their people, and the threat of Iran. Israel was reassured that there would be no more ‘risks for peace’ demanded of the Israeli people. The Palestinians are now in a position of having to decide whether to move with the Arab states to meet the needs of their own people or remain outside the emerging consensus.”