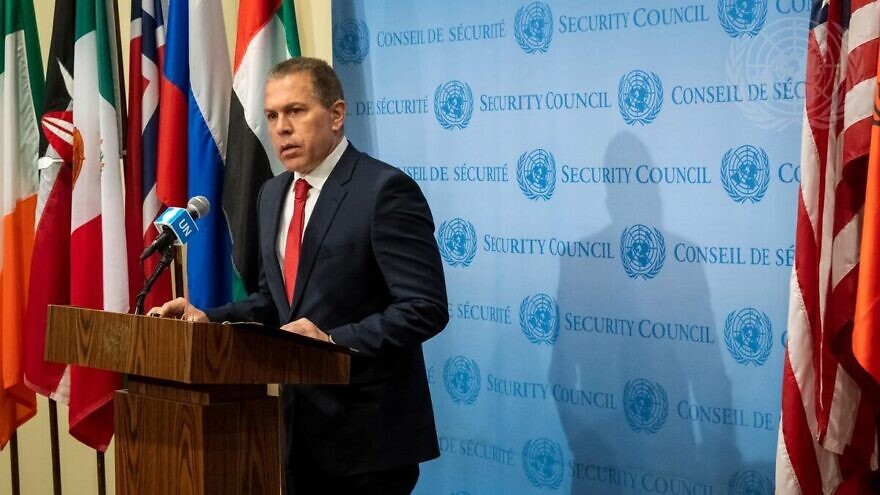 (April 26, 2022 / JNS) It was a scene that encapsulated the U.N. Security Council to a tee: The council was about to hold its quarterly open debate on the Israeli-Palestinian conflict as part of its monthly meeting on the file, coming a week after a special session was called on the matter of tensions on the Temple Mount in Jerusalem.

And yet as much time and apparent dedication—some would say obsession—that the council invests in bringing the supposed truth about the conflict to light, Israeli Ambassador to the United Nations Gilad Erdan was left to show critical video documenting Palestinian violence and incitement on the Temple Mount to the media since the council denied his request to show it in the chamber itself.

“All of the events on the Temple Mount have been captured on camera. Photos and video footage showing exactly who is to blame for the chaos and violence are accessible to all, yet when I requested to show this footage to the members of the Council at the debate, I was sadly denied. … If I can’t share the footage with the Council, I will share a short video with you all here as I am sure that you will all spread the truth on your platforms,” said Erdan to assembled media prior to Monday’s council meeting.

Once inside the chamber, Erdan chastised council members and the broader body for feeding into the narrative that Israel’s containment of Arab rioters on the Temple Mount, followed by its facilitation of peaceful prayer for tens of thousands of Muslims during Ramadan at the same location, somehow puts Israel at fault.

“Unsurprisingly, some in this council and within the U.N. were quick to once again embrace the lies and falsehoods,” said Erdan. “Here is the truth: Hundreds of Palestinian terrorists rioting on the Temple Mount posed a threat to both Muslims and Jewish worshippers at the Western Wall; therefore, Israeli Police had to intervene—police acting with exemplary restraint while protecting the people and restoring law and order.

“Nevertheless, many in the international community called for ‘calm on both sides,’ ” he continued. “Calm on both sides. This request is completely, completely detached from reality. It only serves to fan the flame of violence, promote radicalization and reward the thugs inciting the chaos.”

Notably, Russia was arguably the Security Council member most critical of Israel. Moscow and Jerusalem are at odds diplomatically over the former’s invasion of Ukraine, despite the Israeli government’s efforts to toe a delicate line due to Russian control over Syrian airspace.

“We call on Israel to abandon radical steps to create irreversible realities ‘on the ground,’ including the destruction of Palestinian homes, confiscation of their property and arbitrary arrests, and to resume the peace process on an international legal basis,” he said. “The reason for the regular outbursts of tension and the cyclical escalation of violence in the Middle East is the unresolved Palestinian issue. The latest developments in Jerusalem point to the urgency of resolving the Palestinian-Israeli conflict.”

Nebenzia also took to task the United Nations, the United States and the European Union, which together with Russia form the so-called “Quartet on the Middle East,” for refusing to cooperate with Russia on resuming the push for Israeli-Palestinian peace.

America, as has generally been the case at the United Nations under the current administration, refused to criticize Israel at Monday’s meeting. U.S. Deputy Ambassador Richard Mills instead condemned recent rocket launches towards Israel by terror groups based in the Gaza Strip and Lebanon, noting that Washington recently sent a U.S. State Department delegation to the region in an effort to promote calm.

Mills also pushed back against Russia with claims that its war against Ukraine is exacerbating an already difficult economic situation for Palestinian residents in Gaza.

“The need for humanitarian relief, reconstruction and recovery remain acute,” he said. “Due to [Russian] President [Vladimir] Putin’s unprovoked aggression against Ukraine, food insecurity could worsen even further in the coming weeks, both in Gaza and the West Bank, as prices of food, fuel and other commodities rise.”

During the historic Negev Summit, leaders involved in normalization discussed how they can support Palestinians in concrete ways and have a positive impact on the daily lives of Palestinians. In that vein, we encourage all Member States to provide concrete assistance, including financial contributions to UNRWA, to help meet the needs of vulnerable Palestinians,” said Mills, who was among several speakers to urge additional funding to UNRWA, the U.N. Relief Works Agency that has been accused by a number of countries of promoting an endless cycle of conflict, in part through its facilitation of permanent refugee status for Palestinian Arabs and all of their descendants in perpetuity. 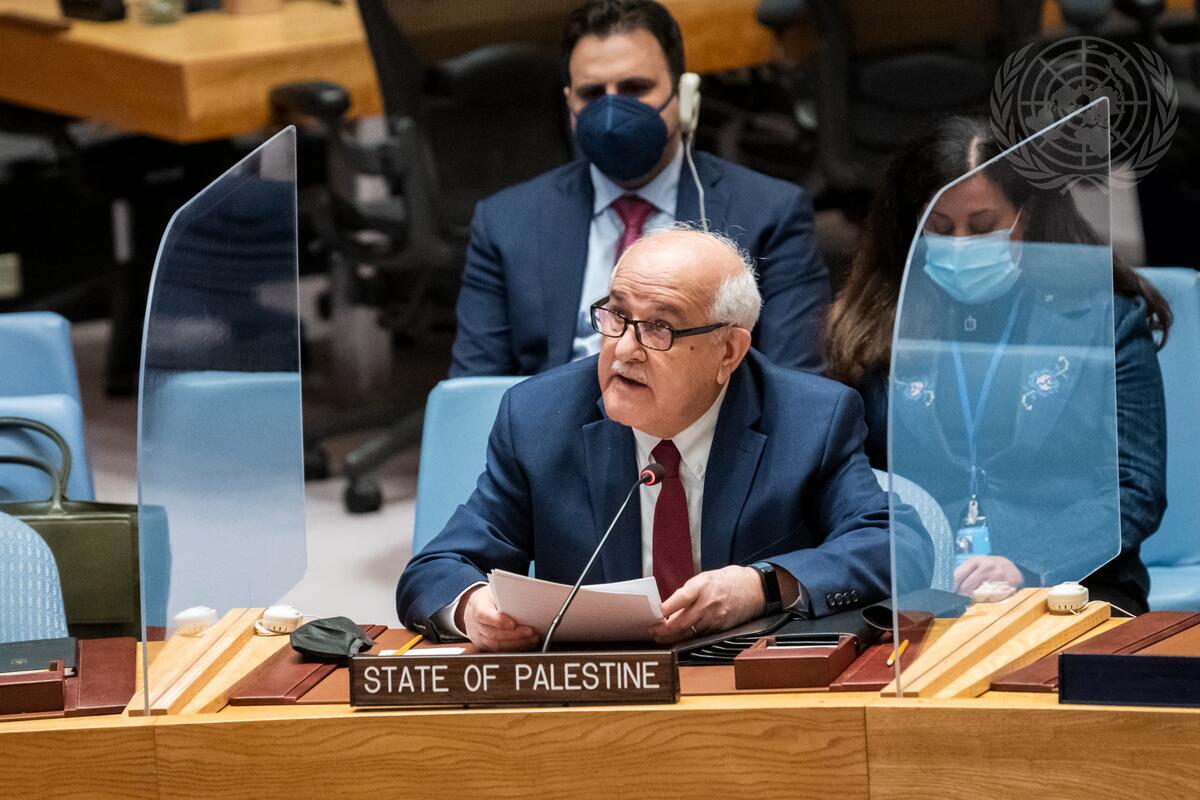 Meanwhile, British Ambassador to the United Nations Barbara Woodward stated at Monday’s session that the United Kingdom “remains firmly of the belief that maintaining the historic status quo is the only means of ensuring freedom of worship.”

Perhaps unknowingly, Albanian Ambassador to the United Nations Ferit Hoxha summarized decades of Palestinian recalcitrance regarding the peace process and its answering of peace offers with violence.

“Knowing what the solution may be for this enduring conflict to end and continuously failing to do what is required to come closer to that solution is equal to a never-ending misfortune. How many times has it happened that whenever a timid ray of hope appears somewhere, something dark and more powerful will come to brutally crash it, as if hope for the Middle East peace process were always in the wrong place? Extremists and their agendas will always be around the corner; they should not be allowed to take center place. To the contrary, hope, vision and rationality should be the ingredients [for] progress towards peace,” said Hoxha.

Virtually on cue, Palestinian envoy to the United Nations Riyad Mansour told the council on Monday that “Israel has no rightful claim or sovereignty over any part of the Occupied Palestinian Territory, including Jerusalem, its Old City and holy sites. Israel has no authority over the [Temple Mount], where the historic and legal status quo must be upheld,” with Mansour failing to acknowledge Israeli security control over the Temple Mount as part of the status quo that gives Jordan day-to-day custodial control over the compound.

Erdan, meanwhile, urged the Security Council—increasingly under fire for its inability to solve real-world issues in real-time—to play catch up.

“The U.N. must change with the times and update its anachronistic regulations to permit the presentation of photos and video footage. Today, a picture or a video, especially from a reliable source, is worth a million words,” said Erdan.

“This is one of the reasons why this institution is becoming increasingly irrelevant. Even when the truth is so abundantly clear, Israel is always faulted, and false moral comparisons are made,” he added. “As the ostrich buries its head in the sand refusing to recognize reality, it frustrates me that international bodies can see the truth with their own eyes, yet choose not to.”