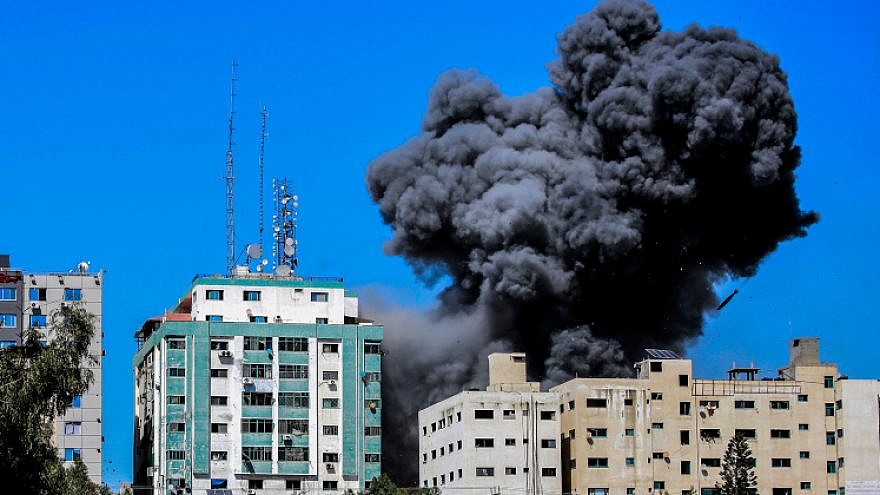 Smoke rising from the Al-Jalaa tower in Gaza City after an Israeli airstrike, which according to the Israel Defense Forces housed Hamas intelligence and weaponry. Several media outlets also had offices in the building, including the Associated Press and Al Jazeera. May 15, 2021. Photo by Atia Mohammed/Flash90.
Spread the word.
Help JNS grow!
Share now:

(June 8, 2021 / JNS) Israel’s Ambassador to the United States and the United Nations Gilad Erdan met with senior leadership of the Associated Press on Monday in New York, where he told the media outlet that Hamas was using the Gaza media tower to jam Iron Dome batteries in Israel.

“The unit was developing an electronic jamming system to be used against the Iron Dome defense system,” said Erdan, officially informing for the first time why Hamas operating in that building posed such an imminent threat to Israeli civilians and was prioritized by the Israel Defense Forces.

Erdan added that “AP is one of the most important news agencies in the world, and Israel doesn’t think that AP employees were aware it was being cynically used in this way by Hamas for a secret unit.”

Erdan met with AP president and CEO Gary Pruitt and vice president of international news Ian Phillips to reaffirm that Israel upholds “the importance of press freedom and ensures the safety of journalists wherever they are reporting.”

The IDF strike on the 12-story Gaza media tower on May 15, known as the Al-Jalaa tower, which housed the offices of the AP, Al Jazeera and other media outlets, drew worldwide condemnation at the time. However, the IDF insisted at the time that Hamas was using the building as a base of operations for Hamas military intelligence, including “gathered intel for attacks against Israel, manufactured weapons & positioned equipment to hamper IDF operations.”

The ambassador went on to assure the news agency that “Israel did everything it could to make sure that no employees or civilians were hurt during this important operation.”

There were no causalities reported from the strike.

He added that “in contrast, Hamas is a genocidal terrorist organization that has no regard for the press. It purposely places its terror machine in civilian areas, including in offices being used by international media outlets.”

Erdan also told AP that “Israel is willing to assist in rebuilding its offices and operations in Gaza.”