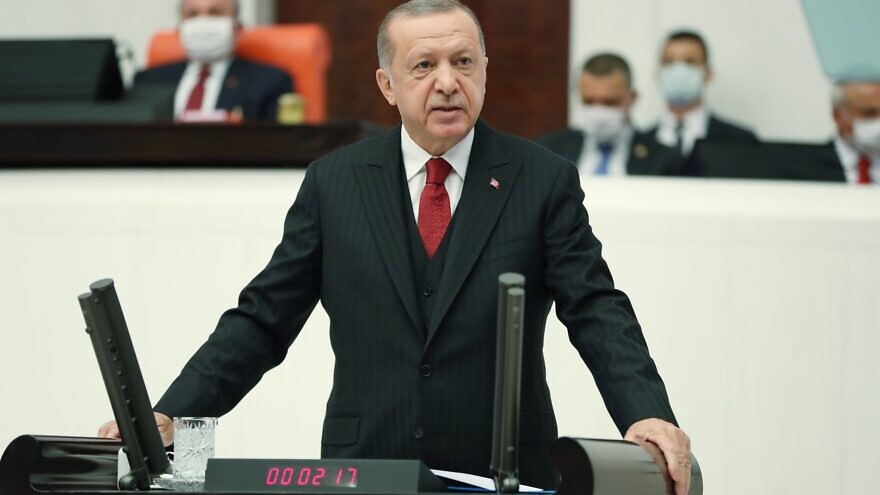 (December 6, 2020 / Israel Hayom) Following years of diplomatic strife, Turkey over the weekend signaled to Israel yet again its desire for rapprochement. On Monday, former admiral Cihat Yayci, a close confidant of Turkish President Recep Tayyip Erdoğan, is expected to publish a first-of-its-kind proposal for an agreement on the countries’ shared exclusive economic zones (EEZs) in the Mediterranean Sea. The article will appear in the Israeli academic journal Turkeyscope—published by the Moshe Dayan Center for Middle Eastern and African Studies at Tel Aviv University—indicating in and of itself a desire to quell tensions with Israel.

Israel Hayom has learned this was the second such signal of reconciliation from Turkey as it pertains to Israel’s energy market. Four months ago, officials in Ankara sent their Israeli counterparts a clear message about Turkey’s desire to launch talks on the matter. Due to the coronavirus pandemic, however, the process stalled. The next proposal followed a report last week in an Erdoğan-affiliated Turkish media outlet about secret talks between Mossad officials and their Turkish counterparts. According to the report, in these talks, too, Erdoğan’s representatives expressed a desire to readjust relations with Israel. The report also noted that in recent months the Turkish leader has ceased making belligerent statements about the Jewish state.

According to Yayci’s proposal, meanwhile, the maritime borders between the two countries will come together at the expense of Cyprus. From the perspective of the Turks, the deal proposed to the Israelis is an extension of the maritime border the former admiral constructed with Libya. That deal was signed in Tripoli on Nov. 27 of last year and is the source of the current tensions between Ankara and Athens. If to this point the Greeks were already enraged over their maritime contiguity with Cyprus being severed, then such a deal would make things even more difficult for Athens and Nicosia. 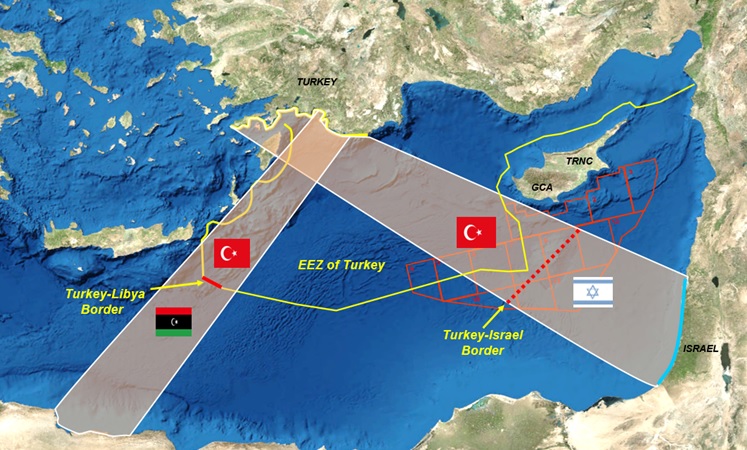 The maritime border between Israel and Cyprus in the area of the Yishai-Aphrodite reservoir is still under dispute, despite all the other agreements the countries have signed. At the same time, Cyprus and Turkey are mired in numerous disputes over their maritime borders. Therefore, Yayci is endeavoring to resolve both Ankara and Jerusalem’s problems in one fell swoop, through a bilateral agreement between Turkey and Israel that leaves Cyprus in the lurch.

Also of potential benefit to Israel, based on Yayci’s proposal, is connecting Israel’s intended gas pipeline to Europe to the already existing Turkish pipeline. According to Yayci, this option would be “significantly more practicable and cheap for Israel in comparison to the EastMed project.”

Any Israeli consent to Yayci’s proposal, meanwhile, would almost certainly spark strident resistance from Greece and Cyprus. First and foremost, they would view any Israeli-Turkish application of sovereignty in what they consider their own territorial waters as an invasion. Secondly, Israeli agreement to the Turkish proposal would also represent recognition of Turkey’s position on the EEZ near the Greek islands of Rhodes and Kastellorizo.

Finally, it would put Israel in an uncertain position in relation to the United Arab Emirates, for two reasons. This first: Abu Dhabi Crown Prince Mohammed bin Zayed recently signed a defense pact with Greek Prime Minister Kyriakos Mitsotakis. Beyond that, the tensions between the UAE and Erdoğan and his Qatari partners could lead to real diplomatic fallout between Jerusalem and Abu Dhabi.

As for the Turkish proposal, a senior Israeli official said that while improving relations with Ankara was a welcome development, any proposal that comes at the expense of Cyprus is a non-starter. “Cyprus is an ally of Israel and the maritime border between the countries is recognized by the United Nations and European Union,” the official explained.

“In light of the recent reports of rapprochement between the countries’ intelligence agencies, Yayci’s very proposal put forth in the article he penned indicates Ankara’s desire for a new upgrade of relations [with Israel],” said Turkeyscope editor Dr. Hay Eytan Cohen Yanarocak. “With that, for the two countries to upgrade relations to the point of real normalization, trust-building measures must be put in place, which before all else requires the return of ambassadors and consuls.”

Yanarocak added: “For the sake of any relationship built on mutual trust, Turkey needs to change the nature of its discourse toward the State of Israel. In other words, it must stop with the delegitimization of Israel that harms its image in the Turkish street. Beyond that, Ankara must scrap its intimate relationship with Hamas. If Erdoğan does this, it’s reasonably safe to believe Jerusalem will strive to find ways to make the relationship prosper again, as has happened in the past.”