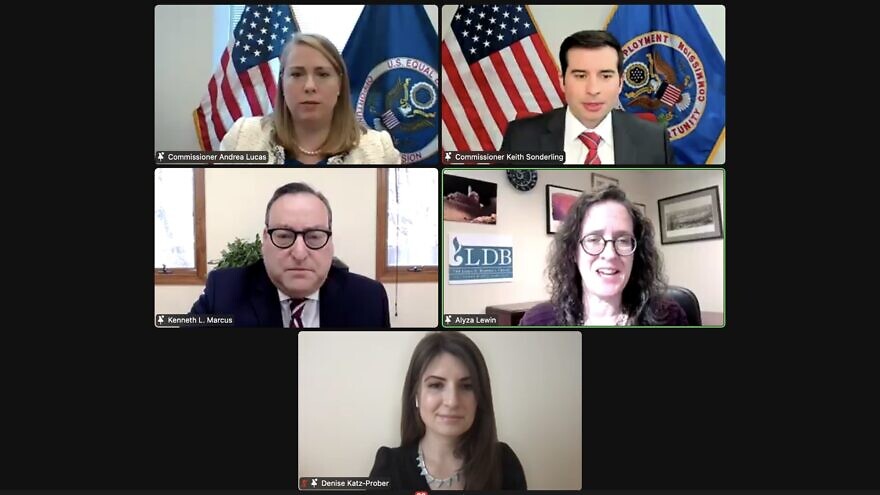 U.S. Equal Employment Opportunity Commissioners Andrea Lucas and Keith Sonderling give a presentation on statistics on workplace and educational anti-Semitism, as well as the laws that protect workers against acts of anti-Semitism and harassment about their Judaism. Source: Screenshot.
Republish this article
1405 WORDS
Spread the word.
Help JNS grow!
Share now:

(January 12, 2022 / JNS) With a general rise in anti-Semitic violence last year, instances of anti-Semitism have also been on the rise in work and education settings, something the U.S. Equal Employment Opportunity Commission (EEOC) is closely monitoring according to senior commission members who were guests on Monday of a virtual panel discussion held by the Brandeis Center.

EEOC commissioners Andrea Lucas and Keith Sonderling gave a presentation that included statistics on workplace and educational anti-Semitism, as well as the laws that protect workers against acts of anti-Semitism and harassment about their Judaism.

Lucas highlighted some of the statistics, including that one out of four American Jews reports having been a victim of anti-Semitism, according to a study by the American Jewish Committee (AJC), with 39 percent responding that they had to change their behavior to limit activities and conceal their Jewishness.

Another statistic Lucas spoke about was that according to a Brandeis Center study, 65 percent of Jewish students say that they have felt unsafe and 50 percent have hidden their Jewish identity on campus, with one in three Jewish students reporting that they’ve personally experienced anti-Semitism.

“These are horrifying statistics. And even worse, to some degree is that the general public does not seem to be aware of these concerns, or at least at the same level that American Jews do,” said Lucas.

Only 60 percent of the general public viewed anti-Semitism as a problem, as opposed to 90 percent of Jews, and less than 50 percent of non-Jews said that it was growing, according to the AJC survey, compared to 80 percent among American Jews.

Lucas pointed to the number of incidents of workplace anti-Semitism that made the news last year, including anti-Semitic posts by a Google executive; another executive in Utah tying anti-Semitic conspiracy theories to the coronavirus and vaccinations; and a government commerce director in Philadelphia resigning after news broke of him creating a hostile work environment with anti-Semitic remarks spanning many years.

In another instance, an African-American Jewish book-publishing executive posted a statement affirming their organization’s commitment to their Jewish employees but resigned after receiving an outpouring of anti-Semitic criticism.

Lucas said that the EEOC is always monitoring when there is a rise in a particular type of discrimination, and in May, it noticed what she described as a “serious rise” in anti-Semitic violence. The EEOC released a resolution, led by Lucas, to condemn in the strongest possible terms recent violence, harassment and acts of bias against Jews, and express “heartfelt sympathy” and “solidarity with victims and their families, and reaffirm our commitment to combat religious, ethnic and national origin-based harassment and all other forms of unlawful discrimination and to ensure equal opportunity inclusion and dignity for all throughout America’s workplaces.”

“I’m not Jewish myself, but I think it’s important that we all ally ourselves together to say never again, and that includes unequivocally stating that anti-Semitism is unlawful and unacceptable in our workplaces and in our communities,” said Lucas. “And I’m proud to ally with Jewish colleagues like Commissioner Sonderling and others on the commission. I think it’s really meaningful that we had a unanimous resolution denouncing anti-Semitism this year.”

Sonderling, whose presentation focused on the federal laws regarding workplace discrimination, thanked Lucas for her leadership on the resolution, stating that his grandparents lived through the Holocaust.

‘They’re kind of afraid to speak up’

The presentation’s focus was on identifying and combating workplace anti-Semitism from the perspective of employers and employees. After the presentation, Lucas and Sonderling took questions from Brandeis Center president Alyza Lewin and director of legal initiatives Denise Katz-Prober.

Katz-Prober, director of legal initiatives at the Brandeis Center, asked about a new form of anti-Semitism brought about by Diversity Equity and Inclusion (DEI) program trainings at universities and companies, noting that there has been adverse racial stereotyping not only against Jews but other individuals or groups identified or perceived as white.

“We’ve seen is that there are two problematic consequences. The first being that you have discrete targeted acts of discrimination that are directed at a specific individual employee, but then you might also have sort of the creation through these trainings of almost an orthodoxy in the workplace where employees find it to be intimidating,” she said. “They’re kind of afraid to speak up. And they’re afraid that they’re going to appear as though maybe they disagree or don’t accept this orthodoxy.”

She asked what recourse employees have against the toxic cultural environment in the workplace created by such training.

Lucas said that it’s sometimes not well understood that training sessions could lead to a hostile environment, but that employees who perceive this hostile environment should first report it to human resources or management, and later if no action is taken, consider reporting it to the EEOC.

Employees should be comfortable speaking up against it, said Lucas, adding: “If you don’t complain, it can be much harder to protect your rights later.”

The event’s moderator—founder and chairman of the Brandeis Center, as well as former U.S. Assistant Secretary of Education Kenneth L. Marcus—said that when there is a bias or hate incident, such as on a university campus, the first response from administration is to defer it to the DEI program to do something about it. Sometimes, these programs find the right solution, he said, but not always. Still, there is a growing amount of anecdotal and research evidence in the prevalence of anti-Semitism among those working in DEI programs.

Marcus said this was problematic because the employees of DEI programs are the people professors and students need to go to when a hate crime or anti-Semitism is committed.

“If a university really wants to deal with this problem, what can they do to make sure—not just in training, but in the whole range of activities that DEI does—that they are part of the solution and not part of the problem?” he asked.

‘A good idea to have critical conversations about racism’

In June, the Brandeis Center exposed anti-Semitism within the DEI program of Stanford University in its programming for university employees.

Lucas said that individuals involved in DEI should look inward to determine whether they are focusing too much on the collective.

“Lots of times, the anti-Semitism arises because you are viewing Jews as a collective you are de-individualizing people and that, frankly, is true of a lot of racism and discrimination in general,” she said. “When you engage in any kind of focus of someone on a collective, whoever they are, it can breed problematic conduct, but it can be really stark when we’re talking about anti-Semitism.”

At the same time, when DEI programs focus on power disparities, it is also a traditional avenue for anti-Semitism if the organization does not have a clear stance against anti-Semitism.

She recalled a recent incident at the University of Illinois, where a flier was distributed on campus stating that ending white privilege means ending Jewish privilege and provided data on wealth disparities between white people and other races, and the percentage of Jews.

“These are age-old concerns about and stereotypes about Jews having more power or influence that can turn toxic extremely quickly, just sort of now in a novel context, playing on concepts of critical race theory or systemic racism,” said Lucas. “It’s obviously a good idea to have critical conversations about racism against any number of people in our workplaces. Diversity, equity and inclusion efforts can be tremendously wonderful if done … correctly, but if you were excluding Jews from that conversation, if you’re ignoring the risks towards engaging in anti-Semitic tropes, you can end up hurting the very people who you thought you were helping.”

Lewin said that the point was extremely important because there are Jews who are afraid to push for the inclusion of Jewish identity in these scenarios, as they feel that it means they are not taking seriously the discrimination of other groups and insisting the focus be on the Jewish community.

“I think what you’ve just said is that if you really want to be able to have inclusion, as you said, for all, then you have to include Jewish identity,” said Lewin. “Because otherwise what happens is these programs that are meant to combat and educate about bias and discrimination, end up inadvertently fostering a negative feeling or worse towards Jews.”