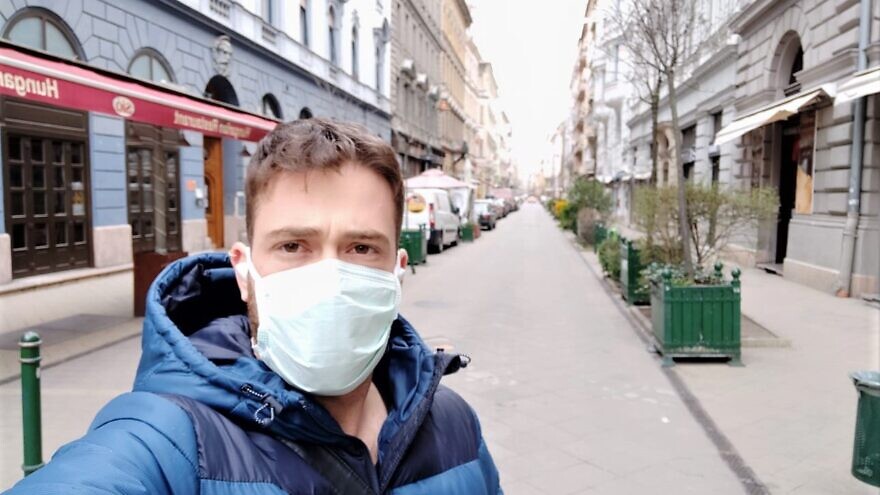 Yoav Leibowitz, 25, a medical student from Netanya who has been in Budapest for the past seven months, is scheduled to return to Israel on a special flight out of Hungary on March 26, 2020. Source: Peter Szijjarto Facebook Page.
Spread the word.
Help JNS grow!
Share now:

A special flight bringing 200 Israelis stranded in Hungary back to Israel is scheduled to depart from the Hungarian capital of Budapest on Thursday.

The Israelis have been unable to leave Hungary since the country has closed its borders due to the coronavirus pandemic.

Taking initiative in making all the necessary arrangements for the flight were members of the Chabad-affiliated EMIH Hungarian-Jewish Association, which is led by Rabbi Shlomo Koves. EMIH also coordinated with the Israeli airline, Arkia, as well as the Israeli Ministry of Foreign Affairs.

The flight was primarily intended for Israelis studying in Budapest, workers at a kosher slaughterhouse who travel from Israel to Hungary on a routine basis to provide kosher meat, and the families of Israeli businessmen living and working in Hungary.

One of the returning Israelis, Yoav Leibowitz, 25, is a medical student from Netanya who has been in Budapest for the past seven months.

“The streets here have emptied out, and there has been a sense of tension in the air,” he said. “I feel that at this time, it is best to return to Israel. Before I came to Hungary, I trained and worked as a paramedic. Once returning, immediately after the quarantine, I am committed and intend to enlist myself back into the Magen David Adom services and to provide assistance at this most difficult time.”

The flight’s organizers from the EMIH community have also arranged for foreign nationals stranded in Israel to return home on the same plane dispatched to Budapest for bringing the Israelis stuck in Hungary back to Israel. EMIH made the necessary preparations in this regard after the community received requests from the foreign ministries of Hungary, the Czech Republic and Croatia, all of whom wanted to ensure the safe return of their respective citizens.

Koves, chief rabbi of EMIH said: “Due to the extraordinary collaboration on the international level, we are not only helping many Israelis return home to celebrate Passover. We are also extending a hand to foreign nationals of Hungary and several neighboring countries, and bringing them home as well.”