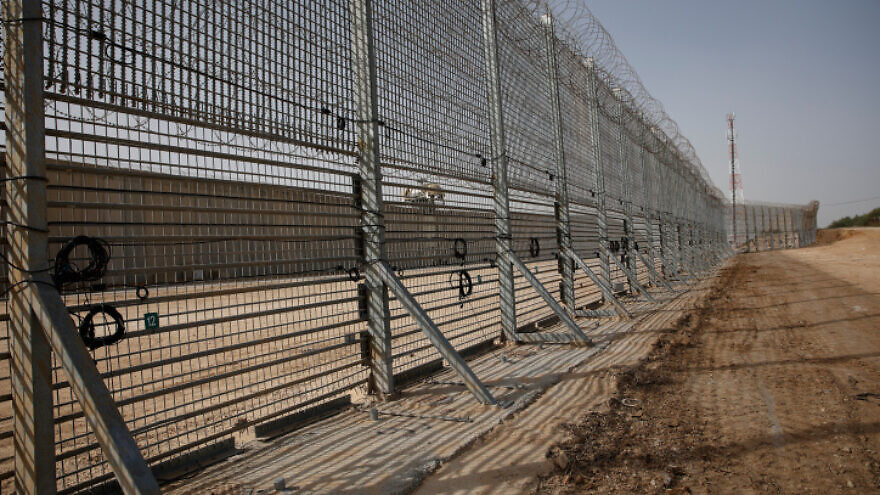 A portion of the security barrier along the Israel-Gaza border, Dec. 8, 2021. Photo by Flash90.
Spread the word.
Help JNS grow!
Share now:

Gantz gave the approval after touring the proposed barrier construction site on Monday. He arrived at the Salem Crossing with senior defense officials, and received reports on the progress of construction efforts on the northern section of the security barrier.

According to the Defense Ministry plan, 50 kilometers of the barrier will comprise a wall featuring technological security systems, running from the Salem Crossing in northern Samaria to the Te’enim Crossing. Work on this section has begun and is on schedule, according to Gantz’s office.

An additional 50 kilometers, from Te’enim Crossing to the Oranit community, will be built along the lines of the border fences on Israel’s borders with Gaza, Egypt and Syria. Work on this section of the barrier is scheduled to begin in the coming months.

According to Gantz’s office, the two types of barriers—the fence and the wall—will total 100 kilometers (62 miles) and will replace the older fence that was built along the seam line some 20 years ago.

The Defense Ministry’s Crossings Authority is leading the construction effort, alongside the Israel Defense Forces’ Central Command and Engineering and Construction Branch.

“This is a most important security mission, and I am proud of the defense establishment and the IDF for promoting the construction of hundreds of kilometers of barrier that will provide a solution to a range of threats,” said Gantz.

In April this year, Israel’s Security Cabinet approved a 360 million shekel ($112 million) plan to extend the security barrier, and to close some of the gaps in the fence, after terrorists exploited gaps in the barrier to enter Israel in vehicles to conduct attacks.