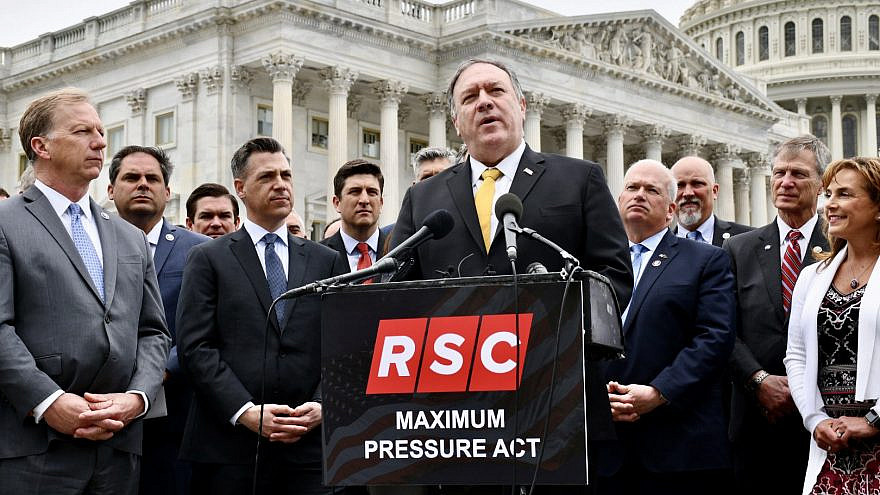 (April 23, 2021 / JNS) Attempting to send a signal that the GOP does not support the Biden administration’s efforts to rejoin the Iran nuclear deal, or the Joint Comprehensive Plan of Action (JCPOA), former Secretary of State Mike Pompeo joined House Republicans on Wednesday to unveil a plan to codify into law the harsh sanctions imposed by the Trump administration.

The Maximum Pressure Act, developed by the Republican Study Committee under Rep. Jim Banks (R-Ind.), would require Senate approval for any new deal between the United States and Iran. It would also expand sanctions against Iran’s ballistic-missile program, the Iran Islamic Revolutionary Guard Corps and Iranian-backed terror groups.

It would also restrict the president’s ability to use waivers to lift certain sanctions and provide for expanded congressional review over the lifting of sanctions.

“[U.S.] President [Joe] Biden has already demonstrated a troubling pattern of using tough rhetoric but pursuing the same, failed appeasement policies as his predecessor President [Barack] Obama,” said Banks, according to Foxnews.com. “His foreign policy can best be summarized: ‘Speak loudly and carry a twig.’ ”

From the start of his presidency, Biden has expressed his intention of rejoining the JCPOA, which the United States finalized in 2015. The Trump administration formally left the agreement in May 2018, reimposing sanctions and adding new ones.

“America, our ally, Israel and the world are safer because [former] President [Donald] Trump’s ‘maximum-pressure’ [cam[aign] and crushing sanctions denied the Iranians the resources they needed to support building a nuclear weapon or to support terrorism around the globe,” Pompeo said in a statement.

The recent effort by Pompeo and the Republicans comes as the United States is participating in indirect negotiations with Iran with the participation of the United Kingdom, France, Germany, Russia and China to negotiate terms for both nations to re-enter the agreement.