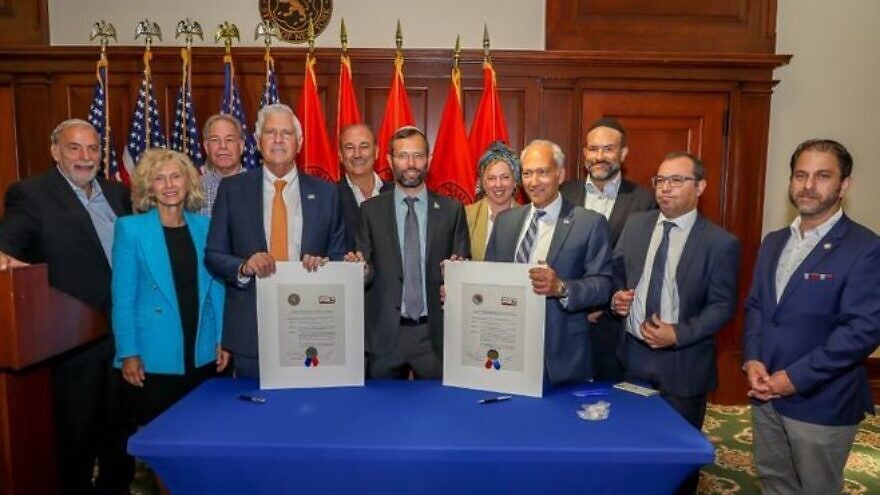 (August 25, 2022 / JNS) Israel’s Binyamin Regional Council signed a friendship declaration with Nassau County and a separate one with the village of Great Neck, to “strengthen the friendly and cooperative relations between the two regions.”

The declaration, signed last week, is the latest in a series of similar agreements for Great Neck Mayor Pedram Bral. He previously initiated similar arrangements with the Israeli city of Herzliya, as well as the community of Eli in Judea and Samaria.

“I always thought that building bridges is the right way to go, both locally and internationally,” Bral told JNS. “Israel makes sense for Great Neck. We have a large population of Jews who care about Israel.”

The declaration, which aims to “contribute to the mutual understanding and cooperation between the governments and people of Israel and the United States,” is part of a grassroots Heartland Initiative, based in Judea and Samaria. The organization seeks to promote people-to-people connections and so-called economic Zionism in Jewish communities outside of Israel proper.

Gedaliah Blum, co-founder and senior partner at the Heartland Initiative and founder of the nonprofit Bikurim organization, told JNS that these types of friendship declarations help fight the BDS movement by promoting Jewish businesses in Judea and Samaria, and by increasing awareness of tourism opportunities.

“Fewer than 1 in 10 visitors to Israel come to Judea and Samaria. Some of that has to do with security,” acknowledged Blum. “But it’s also about accessibility. Now, these folks from Great Neck and Nassau County will have a place to go. It opens the door for cultural exchange.”

There is nothing in the declaration itself which lays out specific programs, and the Herzliya declaration- signed pre-COVID- was supposed to serve as a test case, but is just now being implemented. According to all involved, there are to be face-to-face business meetings, student exchange programs and tourism initiatives.

“We want our children to visit and meet Israeli kids, to see the difference from how Jews in America live, for our kids to learn Hebrew and theirs to learn English. It’s something any town, any village, can appreciate,” said Bral. “It broadens horizons and changes the perception of Yehuda v’Shomron (the Hebrew name for Judea and Samaria), who they are and what they do.”

Nassau County executive Bruce Blakeman, who months ago signed an economic and cultural agreement with the Shomron Regional Council, told JNS that these types of declarations display his area’s commitment to Israel.

“We’re hoping to start implementing the agreement [with Shomron] this fall. We’re working on a wine trade show, showcasing Long Island and Israeli wines, and looking at other exciting things. It will be the same with Binyamin,” he said.

While a friendship declaration between a New York village and an Israeli regional council may not grab the headlines the way the Abraham Accords have, Yonathan Ben Yisrael, co-founder and senior partner at the Heartland Initiative, says it has the potential to make a weighty impact.

“These kinds of friendship declarations aren’t as significant as the Abraham Accords. But if mayors from 25 to 30 cities get together and start talking to each other, it creates a different, stronger, more impactful kind of friendship than it would be with a higher-level agreement,” he said. “It becomes much bigger when people are connecting directly.”