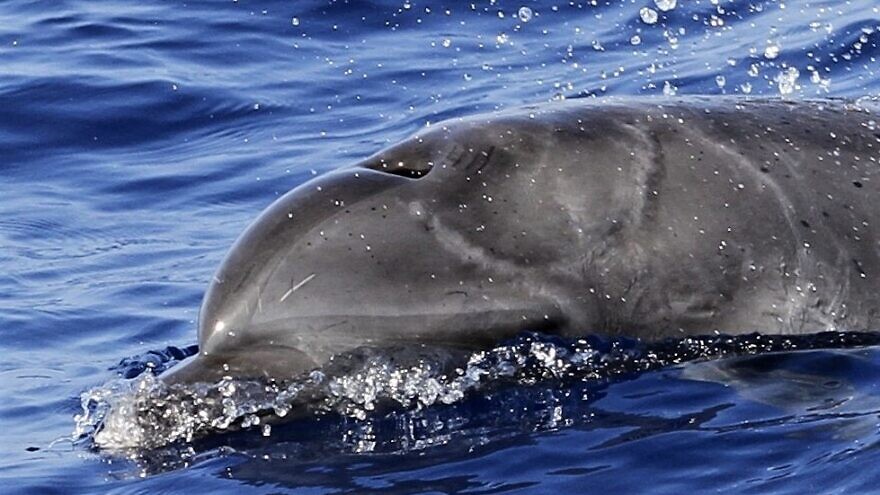 A dolphin was photographed with scars after it was attacked by a shark, spotted off the coast of Ashdod by researchers from the University of Haifa. Credit: Courtesy.
Spread the word.
Help JNS grow!
Share now:

(October 30, 2020 / JNS) For the first time in Israel, a dolphin has been photographed with scars after it was attacked by a shark, spotted off the coast of Ashdod by researchers from the University of Haifa.

“For 20 years in which I have been researching the dolphin population in Israel, I have not seen any evidence of a dolphin being attacked by a shark,” said Aviad Scheinin, top predator project manager at the Morris Khan Marine Research Station at the University of Haifa. “We will continue to monitor the dolphin population in order to understand whether this is an unusual incident of assault or a new phenomenon.”

The dolphin was originally identified and tagged by researchers in November of last year and found again a few weeks ago with scars on the side of his body.

Based on an analysis of the scars, Scheinin believes that the shark involved in the attack was either a dusky shark or a bluntnose sixgill shark, although he stressed that it is not possible to determine with certainty which species of shark was involved.

While studies around the world have found that these two species of shark attack dolphins, Scheinin has not seen any evidence of this in his 20 years of research.

“In areas where large sharks live, such as great whites or tiger sharks, we see many dolphins with scar marks. Since here in Israel we had not yet identified a single dolphin with scars, it had led us to think that there are no such attacks in Israel or at least that they are very infrequent,” said Scheinin. “The new evidence requires us to examine whether this is an isolated case or a new phenomenon.”