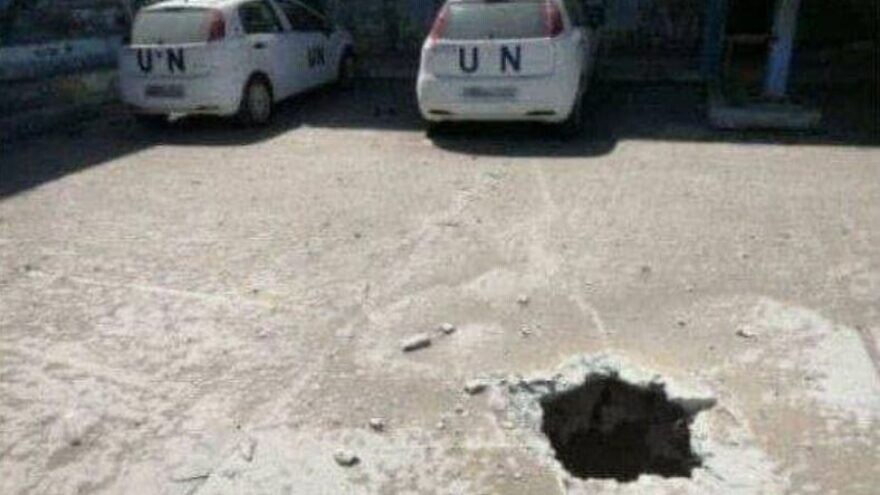 A hole leading into a tunnel, discovered in June 2021, that runs under an UNRWA-run school in the Gaza Strip. Source: Twitter.
Spread the word.
Help JNS grow!
Share now:

(August 11, 2021 / JNS) Hamas prevented a team of U.N. inspectors from examining a tunnel discovered in June under a school in Gaza city’s Zaitoun neighborhood, Israel’s Kan news reported on Tuesday.

Citing Palestinian sources, the report stated that a U.N. Mine Action Service (UNMAS) bomb-disposal unit had arrived at the site a few days ago at the request of the U.N Relief and Works Agency for Palestine Refugees (UNRWA), which runs the school.

Upon learning of the presence of UNMAS inspectors, Hamas police arrived on the scene and forced them to leave.

As a result, the UNMAS team canceled plans to inspect another UNRWA-run school—this one in Rafah, under which there is reportedly also a Hamas tunnel, according to the report.

In the absence of safety inspections, the schools will not be able to open next week as scheduled.

In response, Israeli Ambassador to the United Nations Gilad Erdan tweeted: “I’ve demanded that the U.N. Secretary-General & Director General of @UNRWA investigate this incident & all UNRWA facilities in Gaza to ensure that they are not being used by Hamas for terror. 4,000 Palestinian kids can’t go to school because of Hamas! The international community cannot ignore Hamas’s heinous human rights violations & the state of terror it inflicts on Gazans. Hamas is a terror organization that uses innocents & children as hostages & human shields.”