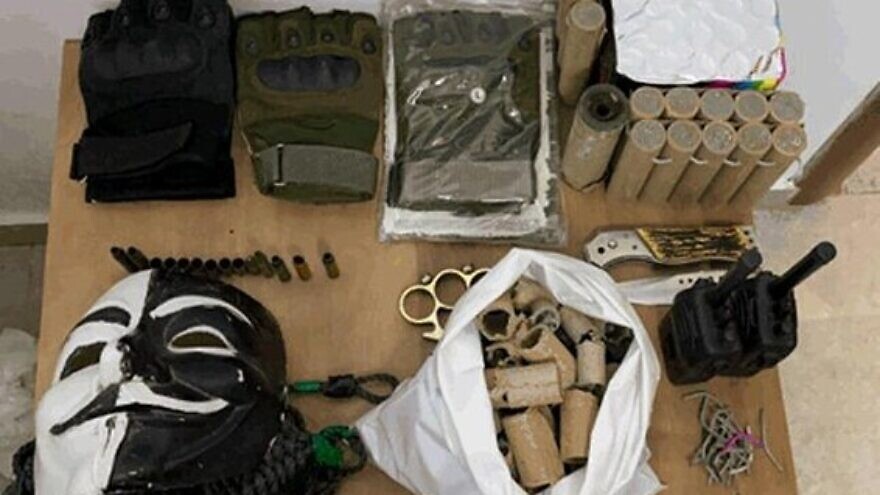 Some of the weapons found in the possession of West Bank Palestinian minors reportedly recruited by Hamas to carry out terror attacks in Israel. Photo: Israel Security Agency
Spread the word.
Help JNS grow!
Share now:

According to available details, two Palestinian minors, one of them 16 years old, residents of Beit Omar in Judea, were arrested by the Shin Bet in October. When questioned, they admitted to being recruited by the terrorist group ruling the Gaza Strip to carry out terrorist attacks.

The teens said they were contacted with instructions via social media, saying the online exchanges were “frequent and over several months,” according to the Shin Bet.

The agency identified their handler as Bilal Kardi, a known operative from the cyber unit operated by the Izzadin al-Qassam Brigades, Hamas’s military wing.

The two minors were reportedly expecting a delivery of weapons, ammunition, uniforms and money with which they were to carry out shooting attacks. They were also ordered to attempt the abduction of Israeli soldiers or civilians.

They were also ordered to gather intelligence on Israeli settlements including Bat Ayin and Kfar Etzion and provide maps detailing gathering points of IDF troops in the area.

The two even tried producing pipe bombs, the agency said.

The suspects were indicted this month in the Judea District military juvenile court, according to a statement from the Shin Bet.

“The investigation underscores the unbridled scope of Hamas’s efforts to advance terrorist attacks and infrastructures in Judea and Samaria by exploiting minors and harming their families,” the statement said.

“The [Shin Bet] will continue to take action to thwart the efforts of Gaza Strip-based Hamas operatives to advance terrorist infrastructures in Judea and Samaria in order to carry out attacks on Israeli territory and thereby undermine regional stability,” the agency said.