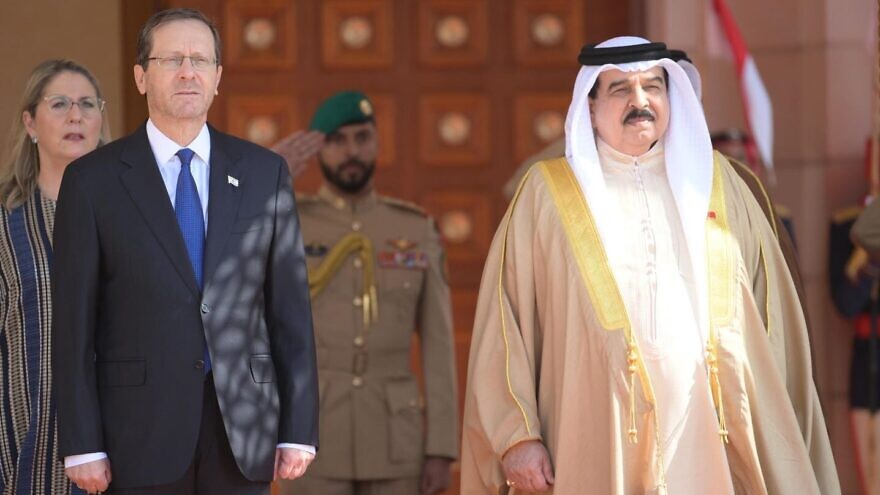 (December 4, 2022 / JNS) President Isaac Herzog on Sunday became the first Israeli head of state to make an official visit to Bahrain, beginning a two-day trip that will include a stop in the United Arab Emirates on Monday.

Bahrain and the UAE normalized relations with Israel in September 2020 under the auspices of the Abraham Accords.

“It is a long process, but we can dream of it and we can see it. Our nations joined the path of peace and the Kingdom of Bahrain is really one of the pioneers in this process, joining other nations that are pursuing peace together for the benefit and well-being of our peoples and the nations in the region and the world at large,” he added.

“We are confident that this visit has an important role in consolidating relations between our two countries and supporting our common aspirations in terms of consolidating peace and sustainable development in the region and the world,” said the monarch.

“[The visit] represents an opportunity for you to witness the beauty of the religious and cultural diversity in our country and the spirit of friendliness, tolerance and peaceful coexistence among the members of our honorable society of all religions and races, reaffirming our belief in the values of peace, brotherhood and cooperation among human beings,” Hamad added.

In the afternoon, Herzog met with members of the local Jewish community.

“I am very moved to be here. This is really history in the making, coming and visiting the Jewish community in Bahrain when we have such incredible peace and wonderful relations,” Herzog said. “We all spent time together at lunch and you can see the great affection and respect between the leadership and our nations….One thing that transpired in our discussion was the immense respect of the king and his family for the Jewish community of Bahrain.”

Bahrain is home to a few dozen Jews, most of them elderly.

The Jewish community in Manama is indigenous, based on immigration to Bahrain in the early 1880s, mostly from Iraq, Iran and Kuwait.

Herzog was presented with three gifts of historic value: a bilingual Hebrew-Arabic Farhi Jewish prayerbook, a book detailing the history of the Bahraini Jewish community, and a copy of the permit to establish the local synagogue in 1931.

Before departing Israel, Herzog said, “This is another historic step in the relationship between Israel and Arab states, signed with the Abraham Accords, and another step towards more and more nations joining the circle of peace with the State of Israel. If one looks ahead, one sees an incredible vista of cooperation between so many industries of Israel, the UAE, Bahrain and other nations that have signed the Abraham Accords, with the hope of including more and more nations in future.

“Predominantly, my visit is a visit of peace. Amid protests and other dissenting voices, the fact that today in the main paper and website in Bahrain, there is an article of mine bringing and delivering a message of peace is another step towards the inclusion of Israel in the region built on cooperation for the well-being of the nations of the region. Inshallah [God willing], we will bring another step towards peace,” said the Israeli president.

Herzog was alluding to the fact that threats were made ahead of his visit to the Gulf, leading to his security detail being increased.

In one of the threats, Herzog was portrayed as a kind of devil, with reddened eyes and lips and flames behind him. Stamped beneath his distorted image was the word: “Criminal.”

Another online ad read in Arabic: “All normalization is an act of treason, don’t come.”

Israeli media also reported that small protests against Herzog’s visit were held in several areas of Bahrain on Friday, with some participants chanting, “Death to Israel.” The demonstrators were reportedly connected to pro-Iranian Shiite opposition groups.

Bahrain’s ruling family is Sunni whereas the country is Shiite-majority.

On Monday, Herzog will hold a tête-à-tête with the ruler of Abu Dhabi and president of the UAE, Sheikh Mohamed bin Zayed Al Nahyan, their fourth meeting since the Israeli president took office in July 2021.