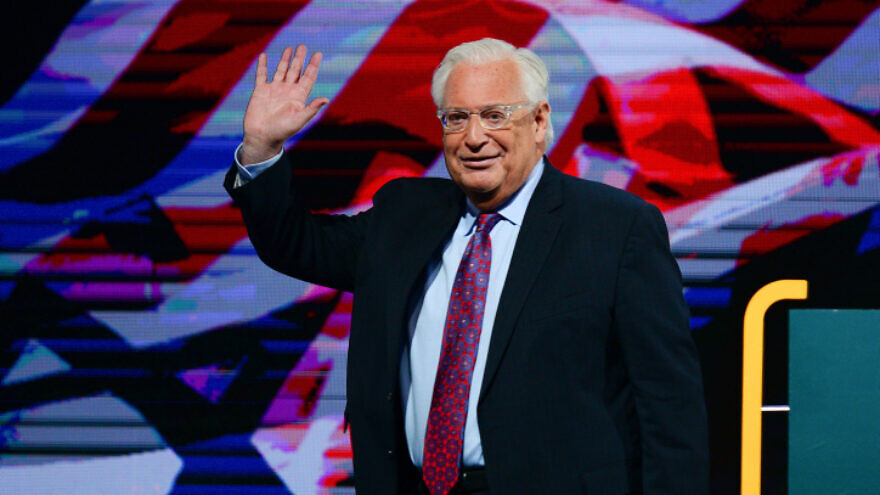 (October 31, 2021 / JNS) It’s been almost a year since U.S. Ambassador to Israel David Friedman completed his service. In an interview with JNS, Friedman—who recently joined former Treasury Secretary Steven Mnuchin’s new investment fund, Liberty Strategic, as its Israel representative, and established the Friedman Center-Peace through Strength—talks about his years with the administration of former U.S. President Donald Trump and plans for the future.

Q: How do you feel now that you are out of office?

A: I miss it. We accomplished a lot, but there there are still a lot of good things that we still could have accomplished. With God’s help, we’ll have a chance to come back.

Q: Did President Trump ever speak to you about his disappointment in the predominantly Democratic Jewish vote?

A: Yes, and he did so publicly, as well. He was the best U.S. president that Israel ever had. Domestically, as well, he spoke out very strongly against anti-Semitism. He felt that, given how much he did for Israel and to fight anti-Semitism, more Jews should have voted for him. However, he did receive more Jewish votes in Florida than any Republican before him. So, it’s a mixed picture. But he definitely was disappointed.

Q: In hindsight, is there anything you would have done differently?

A: I’m pretty satisfied that we did as much as we could to strengthen the U.S.-Israel relationship. Had we known that we were only going to be in office for four years, we might have accelerated our efforts, some of which took a long time, due to their complexity.

Q: What about the current U.S. administration and international efforts where Israel and the Palestinians are concerned?

A: I believe that the U.S. will respect Israel if Israel respects itself. If Israel decides for itself what its long-range goals and values are—with regard to its boundaries or other critical issues—the world ultimately will respect it. Israel must do what is best for Israel, just like every other country does, and worry less about the reactions of others.

Q: What is your reaction to the recent spat between Israeli Defense Minister Benny Gantz and the U.S. administration on the former’s designation of six Palestinian NGOs as terrorist organizations?

Q: Do you think that Israel missed an opportunity, during the Trump administration, to annex Judea and Samaria?

A: During those four years, I was very conscious of the opportunity and the cost of such a move. It was not cost-free, since there were many people in Washington who opposed full sovereignty. I’m not even sure that everyone in Israel is in favor of annexing the entire area of Judea and Samaria. I have never seen anyone in Israel discussing annexing Ramallah or other parts of Areas A and B. Israel was on the path to annexing parts of Judea and Samaria, not all of it—roughly half or Area C. Then came the choice of whether you go forward with that, or take advantage of the breakthrough with the United Arab Emirates, which said that it was ready to make peace with Israel, but that Israel would have to hold off on full sovereignty in the meanwhile, not forever. From the American perspective, this was much more attractive. Judging by Israeli polling, it was much more attractive to Israel, as well.

You have to remember this was at the height of the COVID-19 pandemic. El Al not flying and so on—was problematic. And 90 percent of Israelis supported normalizing relations with the UAE. When that presented itself, though the sovereignty movement didn’t get pushed away, it got slowed down. There isn’t any stipulation in the agreements with the UAE, Bahrain, Morocco and Sudan that forbids Israel from applying full sovereignty to Judea and Samaria.

A: My interests are solely in the relationship between Israel and the U.S., not to immerse myself in Israeli politics.

Q: The mission statement of the Friedman Center says it will follow the Trump peace plan. Yet, in this “Peace to Prosperity” plan, a future Palestinian state is mentioned several times. And most Israelis view such a state as an existential threat. How do you reconcile the two?

A: According to the Trump peace plan, Israel will retain perpetual security control from the Jordan River to the Mediterranean Sea; military control of the airspace; and control of the electromagnetic spectrum. We said to the Palestinians, “Look, there are 2 million of you living here. You will get better infrastructure; you will get better civilian control over your buildings; you will have better opportunities in ways to find how Israelis and Palestinians can work together.” The intention never was to give them full control over any territory. In fact, compared to Area A now, which is under full Palestinian control, that actually was scaled back, so that Israel would regain security control over the entire region of Judea and Samaria.

The Abraham Accords was unique in its ability to achieve peace for peace, and you see how well it’s working. There has been a misconception over the years that people think that the Arab-Israeli conflict is a fight over real estate. It is not, and we [in the Trump administration] never thought it was. It is a battle over whether or not the Palestinians can accept the idea of a Jewish state anywhere between the Jordan River and the Mediterranean Sea. Until that issue gets resolved—and I don’t see any progress made on that—I think that all these discussions about land are mistaken.

We think there are two different issues that relate to the Palestinian-Israeli conflict: human rights and dignity, which we should advance as much as we can. And there is security, which Israel cannot compromise on, because if you put any kind of Palestinian state inside this territory, it would be an existential threat to Israel.

Q: There are those who say that striking Iran to destroy its nuclear capability would be treating a symptom, not the disease, and that the only way to guarantee that Iran forfeits its desire for nuclear weapons is regime change. What’s your position?

A: Regime change is almost impossible to implement from the outside; it must come from within Iran. The United States should be re-imposing maximum sanctions, to force Iran into an acceptable deal. Sanctions were working and will continue to work if reinstated.

Q: Former President Donald Trump blasted the Biden administration for its sudden withdrawal from Afghanistan. But it was Trump who said in April 2020 that by May, all American troops would be evacuated. How do you explain that?

A: The conditions required for withdrawal under the Trump administration would have resulted in the evacuation of U.S. soldiers, citizens and allies, and a return of American property, before the withdrawal. The plan was structured very differently from that which ensued under Biden.