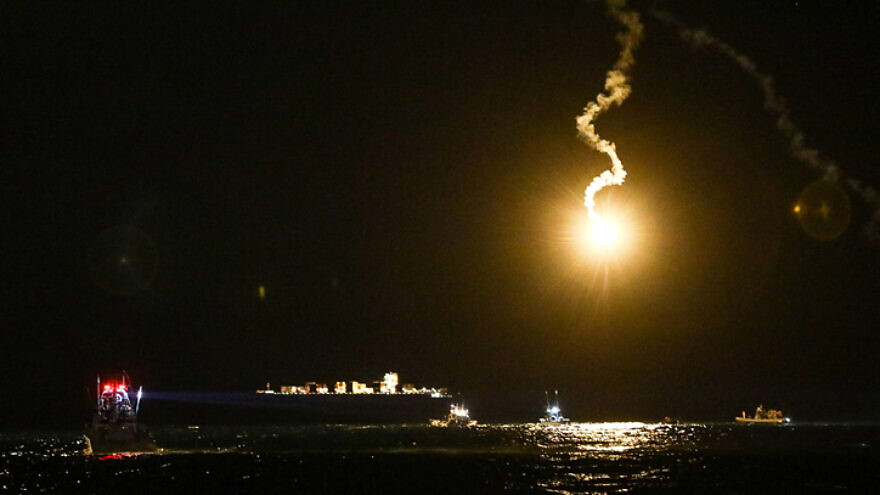 An Israeli army flare illuminated the sky during searches for survivors after a helicopter crashed off the coast of the northern Israeli city of Haifa on Jan. 4, 2022. Photo by Shir Torem/Flash90.
Spread the word.
Help JNS grow!
Share now:

(January 3, 2022 / JNS) An Israel Defense Forces helicopter has crashed off the Haifa coast on Monday evening that left two dead and one with moderate injuries.

According to the IDF Spokesperson’s Unit, an IAF maritime helicopter (“Atalef”) crashed into the Mediterranean Sea, off the coast of Haifa, during a training flight. An aerial observer and two pilots were on board.

The IDF said that the crew members were rescued by Yaltam, Unit 669, Marine Police and Shayetet 13 troops, who administered first aid at the scene.

After extensive resuscitation efforts, the two pilots were declared dead. The aerial observer was moderately injured and evacuated to a hospital.

The cause for the crash is not yet known, and investigators have yet to determine whether it was caused by a technical fault or another reason.

The Rambam Health Care Campus reported that the patient from the crash is being treated in the hospital’s trauma center, and has been hospitalized in the general intensive care unit.

Israeli Defense Minister Benny Gantz received updates on the incident from the military and has spoken with IDF Chief of Staff Lt. Gen. Aviv Kochavi about its details.

The Commanding Officer of the IAF, Maj. Gen. Amikam Norkin, has ordered the temporary discontinuation of training flights in the IAF, as well as the use of the “Atalef” array.