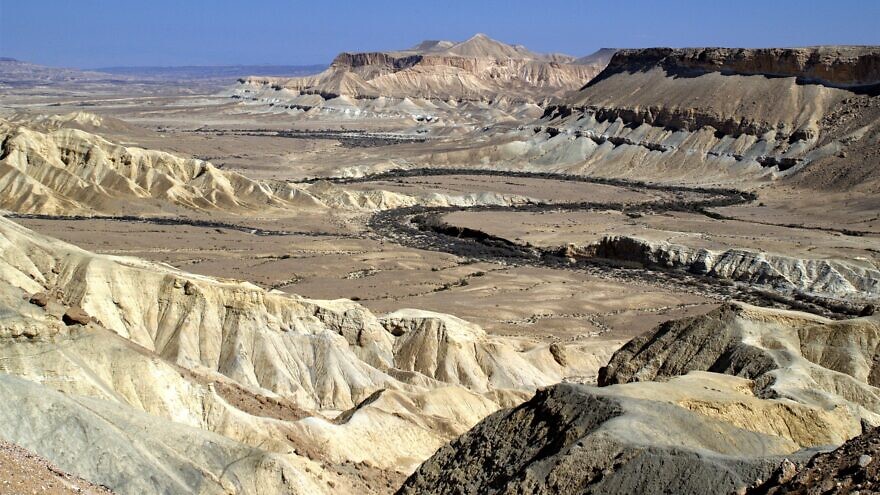 The Zin Valley in the Negev Desert of Israel, as seen from the grave of David Ben-Gurion at Midreshet Ben-Gurion. Credit: David Shankbone via Wikimedia Commons.
Spread the word.
Help JNS grow!
Share now:

(November 15, 2021 / JNS) In a dramatic change to the rules of engagement, the Israel Defense Forces will be permitted to open fire on weapons’ thieves operating in military bases and firing ranges, Israel’s Kan news reported on Sunday.

The report said the changes have been approved by IDF Chief of Staff Lt. Gen. Aviv Kochavi and the military’s legal advisers.

The new rules still limit soldiers to firing at the legs of suspects, according to Ynet.

Israeli Prime Minister Naftali Bennett responded to the report by tweeting a statement saying he welcomed a necessary change that would allow soldiers to defend themselves.

IDF bases in southern Israel’s Negev region have been the target of chronic break-ins by thieves intent on stealing weapons.

Kan said the change followed “years of neglect and foot-dragging,” adding that until now, procedures banned soldiers from firing in such incidents. It highlighted, in particular, Tzelim Base in the Negev as the symbol of soldiers being prohibited from acting against thieves.

In addition, according to the report, the rules of engagement in the West Bank have also undergone changes after “gray zone” uncertainties emerged in several recent shooting incidents.

“The background is, among other issues, the conduct of soldiers during Palestinian riots, which led to harm of innocents,” said the report. The IDF issued a statement saying that its soldiers continue to have the “full right to respond with live fire in cases where soldiers feel that their lives are endangered.”

Soldiers will also have broader freedoms to open fire on drug-smugglers on the Egyptian-Israeli border, which until now they have been barred from doing.