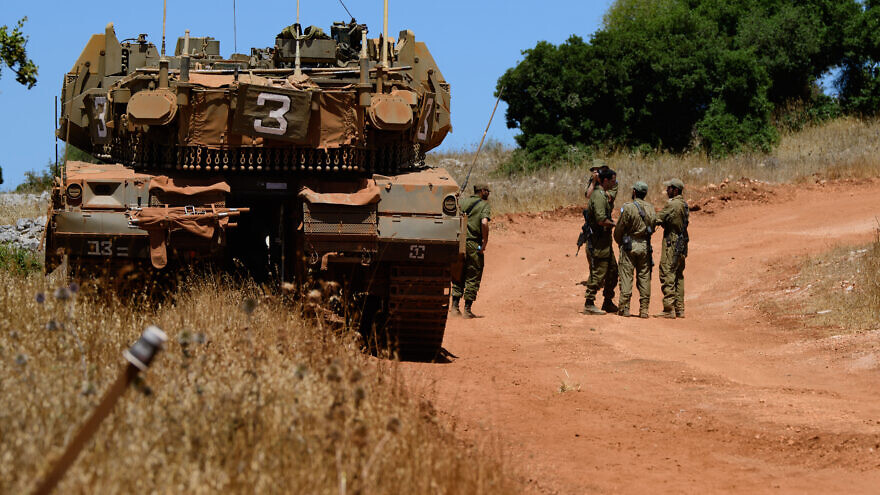 Israel Defense Forces have stationed soldiers and military equipment along the border with Lebanon following the IDF Spokesman's announcement of a state of alert in the north, July 23, 2020. Photo by Basel Awidat/Flash90.
Spread the word.
Help JNS grow!
Share now:

(July 24, 2020 / JNS) The Israel Defense Forces has stepped up its defenses along the northern border with Lebanon on Friday over concern that Hezbollah could launch an imminent attack.

“In light of a situational assessment in the IDF and in accordance with the Northern Command’s defense plan, the IDF’s deployment will change in both the military and civilian arena with the goal of strengthening defenses along the northern border,” the IDF said in a statement.

This comes as tensions along both the Syrian and Lebanese border have increased this week. Hezbollah accused Israel of killing one of its fighters in an airstrike near Damascus on Monday. The IDF did not comment on the incident.

On Friday, explosions were also heard along the Syrian border, where shrapnel struck a home and a car on the Israeli side near the Druze village of Majdal Shams.

The IDF also said it would “hold the Lebanese government responsible for all actions emanating from Lebanon.”

As part of its preparations, the IDF installed roadblocks along several highways near the border to prevent anti-tank missiles fired from either Lebanon or Syria. The military has also cleared troops out of positions directly along the border, pulling them further back into Israel so as to prevent them from being an easy target for Hezbollah. There have also been reports on increased IDF drone activity in Lebanon.

On Thursday, IDF Northern Command Maj. Gen. Amir Baram met with local leaders in the north to reassure them that the Israeli military would defend the area.

“Our central mission, including in these days, is to preserve the security of residents of the north,” said Baram. ”We are prepared for a wide variety of scenarios and are constantly holding situational assessments, and we will continue to prepare as needed to defend [the area] and for operational activities as necessary.”