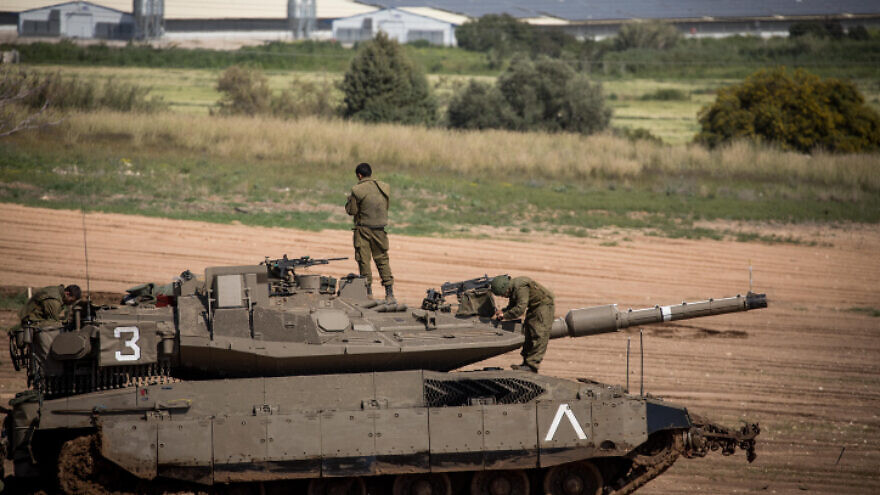 “IDF tanks attacked military positions of the Hamas terror organization,” said the Israeli Defense Forces in a statement. “The attack was carried out in response to the launching of explosive and incendiary balloons from the territory of the Gaza Strip into Israeli territory,” the statement added.

According to the Israel Fire and Rescue Authority, 28 blazes set by explosive balloons launched from Gaza were reported on Wednesday. There has been a surge of such attacks since early August, damaging large areas of farmland and nature reserves.

According to Israeli media reports, Hamas, which rules the Gaza Strip, stepped up the cross-border attacks to bring attention to the dire economic plight in the coastal enclave, and is demanding assurances that it will continue to receive financial assistance from Qatar.

Mohamed al-Emadi, chairman of Qatar’s Committee for the Reconstruction of Gaza was making “intensive efforts to contain the escalation” alongside “Qatari efforts to alleviate the humanitarian crisis experienced by the residents of the Strip,” MENAFN-Gulf Times reported on Wednesday.

The contacts are continuing at “the highest levels,” according to al-Emadi, as cited in the Arab news outlet. He pledged “that Qatar has been and will continue to support” the Palestinians.

Egyptian mediators that entered Gaza on Monday in an attempt to calm tensions left later the same day, their efforts apparently having met with no success.

Israeli Prime Minister Benjamin Netanyahu and Defense Minister Benny Gantz warned in separate appearances on Wednesday that in addition to striking terror installations and destroying weapons, Israel could return to targeted killings of terrorists to prevent imminent attacks on Israel.

In talks with the heads of Gaza-area communities on Tuesday evening, Israeli Prime Minister Benjamin Netanyahu said that from here on out, arson attacks from Gaza were to be treated like rocket attacks. “Hamas will be making a very great mistake if it continues like this,” said Netanyahu.

Rockets were fired from Gaza into southern Israel twice this week: toward the Sderot area on Sunday and toward the Ashkelon region on Tuesday.