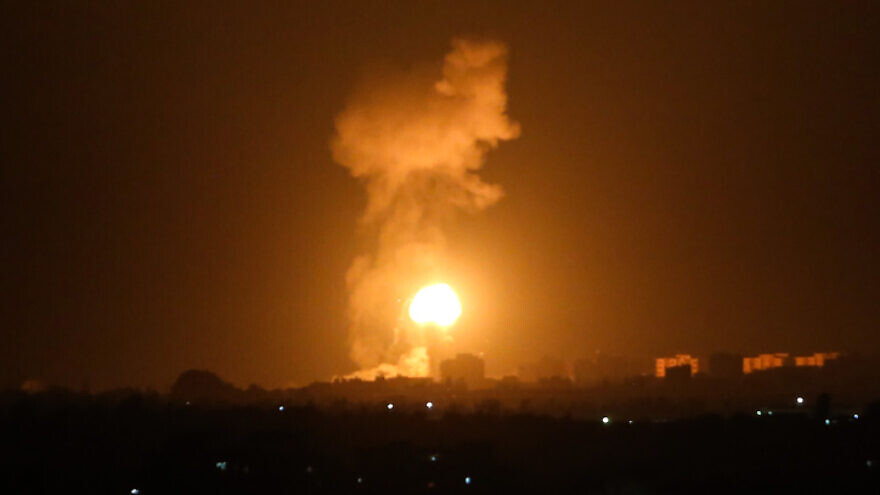 (August 19, 2020 / Israel Hayom) Israel struck several Hamas targets in the Gaza Strip overnight Tuesday after a rocket was launched at southern Israel earlier in the evening, according to the Israel Defense Forces.

The rocket triggered sirens in Ashkelon and Kibbutz Zikim, according to the IDF, sending thousands running to bomb shelters. Ashkelon Mayor Tomer Glam was hosting Israeli Education Minister Yoav Galant for a tour of the city at the time, Ynet reported. Two girls were lightly injured while running to shelters, according to the report.

The rocket landed in an open field, causing no damage.

The strikes were a response to the rocket and also to explosive and incendiary balloons launched into Israel from Gaza earlier in the day, according to the IDF.

Cross-border arson attacks from the Gaza Strip on Tuesday ignited at least 39 fires in southern Israel. Firefighters, Jewish National Fund and Israel Nature and Parks Authority teams, IDF soldiers and civilian volunteers worked from the morning hours to extinguish the flames. Most of the fires were “small and not dangerous,” an Israel Fire and Rescue Services spokesperson said in a statement.

Terrorist groups in Gaza launched two rockets into Israel from Gaza on Sunday, both of which were downed by Israel’s Iron Dome air defense system, according to the military. Shrapnel from the interception of one of the rockets hit a house in the southern Israeli city of Sderot, lightly wounding a 58-year-old man.

In a conversation with the heads of Gaza-area communities on Tuesday evening, Israeli Prime Minister Benjamin Netanyahu said that Israel had adopted the policy that arson attacks were to be treated like rocket attacks.

“We have been active for the past 10 days straight in shelling the infrastructures of Hamas and the terrorist organizations [in the Gaza Strip]. We have also imposed various sanctions in areas that are important to Hamas,” said Netanyahu, according to a statement from his office.

“I regret that we are also preparing, to the extent necessary, for the possibility of [an additional] round or rounds. I hope that we will not get there,” he said. “Hamas will be making a very great mistake if it continues like this. Even now it is receiving an indication of where this will lead. It will certainly remember where it has led [in the past], and I hope that [Palestinian] Islamic Jihad also remembers where it has led,” he added.

“I very much appreciate your resilience and the fact that you understand that we are not taking this lightly. I am not taking it lightly, neither am I familiar with anyone in our leadership who takes it lightly, and we will act with full force against it,” he said.

Israeli Defense Minister Benny Gantz invited leaders from Gaza-adjacent communities to his office in Tel Aviv for a meeting on Wednesday.