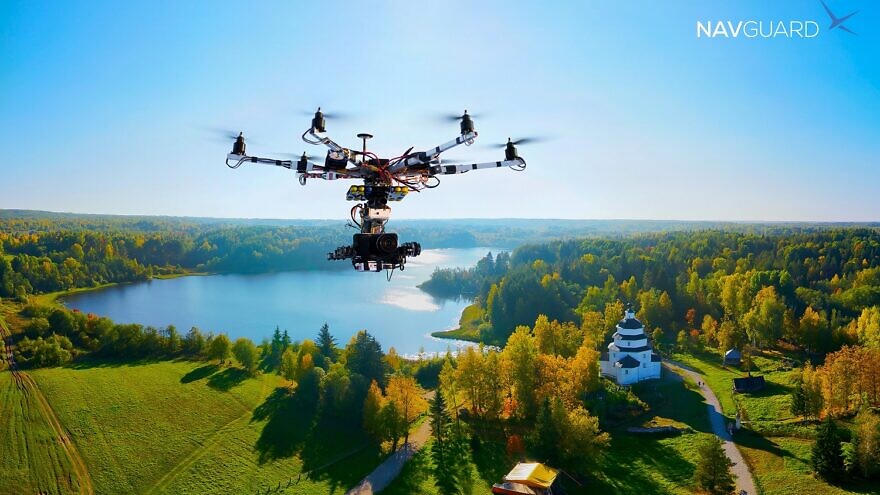 Asio has developed a system called NavGuard to provide drones with their own ability to process video feeds from on-board cameras, analyze their surroundings and convert that information into precise location information. Credit: Courtesy.
Republish this article
1032 WORDS
Spread the word.
Help JNS grow!
Share now:

(September 17, 2021 / JNS) In the not-too-distant future, the skies will grow increasingly crowded with drones, and civil aviation authorities are concerned about safety.

In 2020, the number of consumer-level drone services in the United States surpassed $1.25 billion, and according to Markets Insider, drone-related services are projected to make $63.6 billion by 2025.

Drones are playing bigger roles in a host of civilian sectors, including retail delivery, agriculture, construction, insurance, fire surveillance, powerline monitoring, media tasks and law enforcement. And it has aviation authorities and regulators concerned about the associated risk of accidents.

“Unlike 20th-century traffic, you can’t just pull off to the side of the road if you have a drone accident,” David Harel, CEO of Asio Technologies, an Israeli company that specializes in solutions for military ground forces, told JNS.

Drone accidents can occur for any number of reasons, such as engine or rotor failure, or a power supply fault. While those risks can be overcome by introducing backup components in the drones, the loss of a satellite signal and the cutting off of Global Navigational Satellite System (GNSS) guidance could not be overcome by the drones, leading them to hit the ground.

A crash could mean a free fall into a busy highway with all of the obvious risks that entails.

As a result, Asio has developed a system called NavGuard to provide drones with their own ability to process video feeds from onboard cameras, analyze their surroundings and convert that information into precise location information. In other words, even if satellite signals are cut, drones equipped with the system still know where they are and can continue on in their journey.

‘The need is real, and the market is endless’

Originally developed for the defense and homeland security sectors—Asio has signed a number of contracts to sell NavGuard to such clients—the company has now turned its attention to the civilian market.

“We very quickly learned that civilian market is our main market,” said Harel. “There are much larger quantities of drones here. The need is real, and the market is endless. We are just at this stage where we are breaking through to it,” he added.

The problem of unreliable drone navigation may sound theoretical, but once the skies become increasingly crowded with drones, the issue will become acute, he stated.

Retail deliveries by drone are an estimated 70 percent to 90 percent cheaper compared to vehicle deliveries, making the financial incentive to switch to drone deliveries clear.

“The problem will be too many drones in the air, and many of the services will begin flying in overpopulated areas,” cautioned Harel. “In the past, civilian drone use was mainly limited to agricultural and more remote areas. Now they are being sent to homes. Safety has become critical.”

The issue of dependence on GPS signals has therefore become critical as well. With anyone able to order GPS jammers for tens of dollars off the Internet, the ease with which drones can be downed creates what Harel described as “real liability issues” for operators, alongside safety issues.

“If something happens, the operators are liable to lawsuits,” he said.

Meanwhile, the Federal Aviation Administration in the United States and the Israel Airports Authority have designated a 120-meter limitation on permitted altitudes for civilian drones.

One way to overcome the loss of satellite signal is through a system called inertial navigation system (INS), which uses sensors and computers to figure out locations without satellites. But those solutions are expensive and often heavy in weight, noted Harel, making them more suitable for aircraft than small drones.

‘A comprehensive solution to navigating independently’

NavGuard’s technology is based on a credit-card-sized card that links to the drone’s navigation system. It contains a unique algorithm—the hardware—and a software program that runs on the basis of that algorithm. The system connects to day and night cameras.

It then analyzes real-time video feeds from around the drone and matches them to a digital map of the relevant route.

This technology generates a precise geographical location of the drone in the air. “It does not rely on an external signal,” said Harel.

The drone can then continue on its route even if it suddenly finds itself without any satellite connection.

“This is a comprehensive solution to the problem of navigating independently of GNSS. It gives a high degree of mission certainty, even when there is a GNSS signal problem,” explained Harel.

As a growing number of aviation authorities demand backups to GNSS guidance systems onboard drones, Harel said his company is getting ready to make a big difference to civilian drone use.

“Once there are many drones in the air, authorities will want to know where each one is, just as they know where every plane is. If they don’t have such a system, they can’t know their location for sure,” he said. “Those who don’t have this kind of system are also exposed to crashes caused by cyber attacks.”

During the trial, the NDI positioned GPS jammers on the ground, and once it made sure there was no satellite signal in the vicinity, challenged drones made by the Blue White Robotics company (with NavGuard installed) to take off and fly accurately along pre-selected routes.

The tests are part of Israel’s initiatives to enable drones to conduct missions such as transferring medicines and corona test results around the country.

To promote autonomous drone flights in urban areas, the NDI “looks for technological solutions that will ensure flight safety and will allow control of the drone,” said Dror Ben-David, NDI content expert on behalf of Ayalon Highway.

“Several technologies worldwide that attempt to supply such a solution—NavGuard’s technology, in which the drone can geo-locate itself at any given moment—have been found to fulfill the requirement in a satisfying manner,” said Ben-David. “As far as we know, the approach demonstrated is the only technology capable of doing so to such level of accuracy.