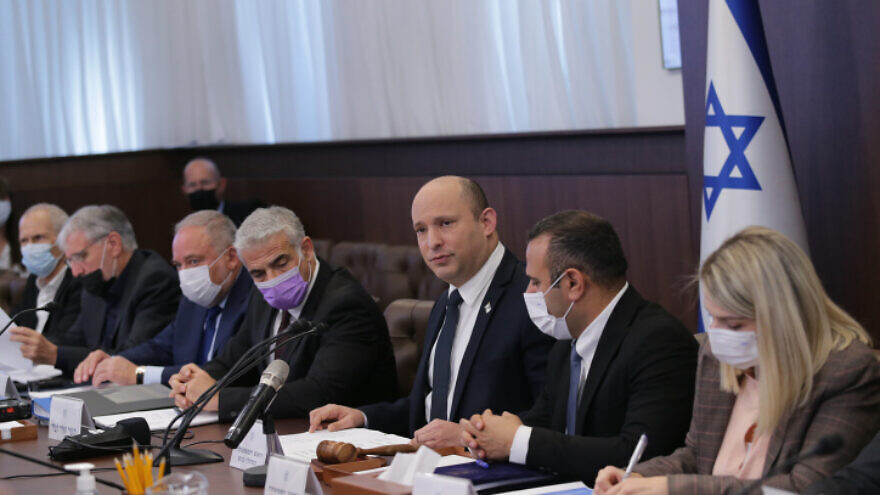 (October 18, 2021 / Israel Hayom) The Israeli government approved legislation on Sunday that would expand the powers of the Israel Police, allowing residential searches without a warrant.

The move is part of the government’s efforts to curb a surge in violent crime in Israel’s Arab community, which on Monday morning claimed its 100th victim.

Backed by Justice Minister Gideon Sa’ar, the bill allows police officers to enter a home if they believe that by doing so they can locate a suspect or evidence related to a serious crime.

“We need to make sure that we do not stray over to other issues,” said Gantz.

The controversial measure was deemed necessary as part of an attempt by law enforcement to round up illegal weapons in the sector, the large number of which is believed to be fueling much of the gang violence seen in recent months.

During the weekly Cabinet meeting, Prime Minister Naftali Bennett sounded the alarm about Arab-sector violence, saying, “We are losing the country.”

On Monday, the government announced that as part of its five-year plan to boost the Arab sector’s social and economic development, special programs would be set up to fight violence and advance welfare issues.

Some NIS 100 million ($31 million) will be appropriated to dealing with domestic violence in the Arab community.

“This is an important, historic plan that shines a spotlight at a part of society that has been neglected,” said Welfare Services Minister Meir Cohen, adding that his ministry seeks to deal with all the major issues plaguing the Arab community, including violence, poverty, domestic violence and nutrition insecurity.

“This plan has to be put in motion regardless of who is leading the government,” he noted. “I’m glad we’re the ones starting it.”

Social Equality Minister Meirav Cohen also called the five-year plan “historic,” saying that it would be two-pronged: “On the one hand, we are investing in a host of issues seeking to create hope and equal opportunity that would benefit Israeli society as a whole in the long run; while on the other hand we are pushing a series of steps and plans seeking to deal with the most pressing daily issues in the Arab sector.”

The plan, she stressed, “redefines national priorities and seeks to promote social equality in Israel. … The plan’s success will lead to a more just, equal Israeli society and bolster the shared Israeli narrative.”

Ra’am, he added, “expects all government ministries to cooperate [with the plan], and do everything in their power as true partners, to complete its outline even before the state budget is approved.”

The Knesset is expected to vote next month on the state budget.