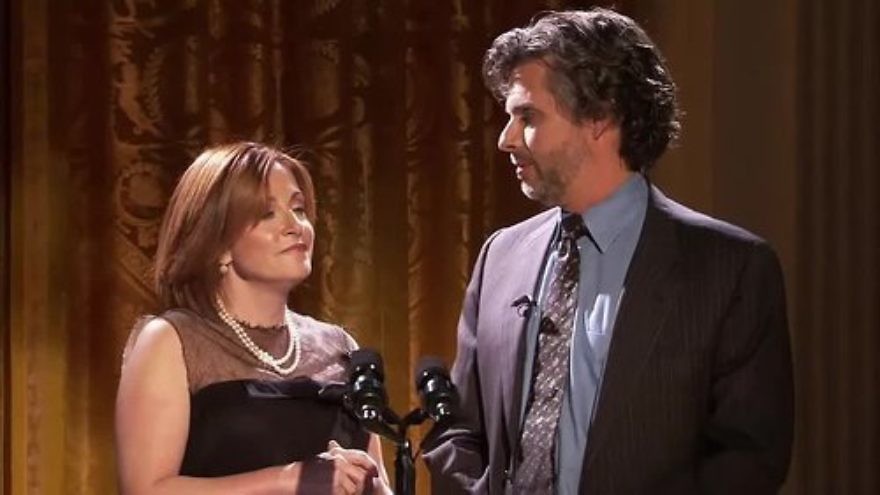 Noted literary couple Michael Chabon and Ayelet Waldman have discovered a new cause: the evils of “the Israeli occupation of the Palestinians.”

Having become experts on the subject after one brief visit to a few sites in the region, Chabon and Waldman have now edited an anthology of essays about “the occupation.” And they are busy on the lecture circuit, giving pompous interviews to gushing reporters and basking in the limelight that only political correctness can offer.

This past week, The Forward published a glowing four (!) page feature on the Chabon-Waldman anti-occupation crusade. In her introductory backgrounder, author/interviewer Talya Zax hailed the “insights” that Chabon and Waldman, “two mainstays of the Jewish literary world,” supposedly gleaned from leading a group of American writers on a visit to the disputed territories.

“Responding to what they saw,” Zax wrote, “the anthologized writers took on subjects ranging from activism in the Shuafat Refugee Camp, the only Palestinian camp that falls under Israeli jurisdiction, to the world of Palestinian soccer.”

Did Zax just call it “the only Palestinian camp that falls under Israeli jurisdiction?”

How can the Israelis do all that subjugating, oppressing and persecuting, if nearly all the Palestinian refugee camps are not even under their jurisdiction?

Poor Zax. She just let the cat out of the bag. Her only hope is that nobody notices.

That’s why, when Chabon, Waldman and their friends visited Palestinian cities, they didn’t see any Israeli governor or military administration. The Israelis left more than 20 years ago.

Chabon’s own essay in the book concerns one Sam Bahour, “a Palestinian-American businessman who moved to Ramallah to build the Palestinian economy in the wake of the Oslo peace accords, only to watch the Israeli occupation deepen around him.” What a remarkable statement! Ramallah is the de facto capital of the PA regime. There are no Israeli soldiers in Ramallah. Yet somehow Bahour, in Ramallah, is “watching the Israeli occupation deepen around him.”

But Chabon and Waldman can’t acknowledge any of this. It would mean no more lectures, cocktail parties or interviews with panting fans disguised as reporters. So they prefer to stick to what they, as novelists, know best: fiction. The fiction of “the Israeli occupation.”

There is one additional, and very disturbing, aspect to this story that must be mentioned. In her interview with The Forward, Waldman candidly declared, “The peace that I imagine [for Israel and the Palestinians] at this point is a single democratic country.” So Waldman opposes the existence of Israel as a separate Jewish state. She wants to have a single “Palestine,” which, of course, would soon have an Arab majority.

I say “thank you” to Waldman, for being honest about her opposition to Israel’s existence as an independent Jewish state. I offer her my thanks for openly admitting that when she speaks of “the occupation,” she is not talking just about Israel’s presence in part of Judea and Samaria. She is talking about Israel’s very existence. Let’s see how many other interviewers ask her about that.