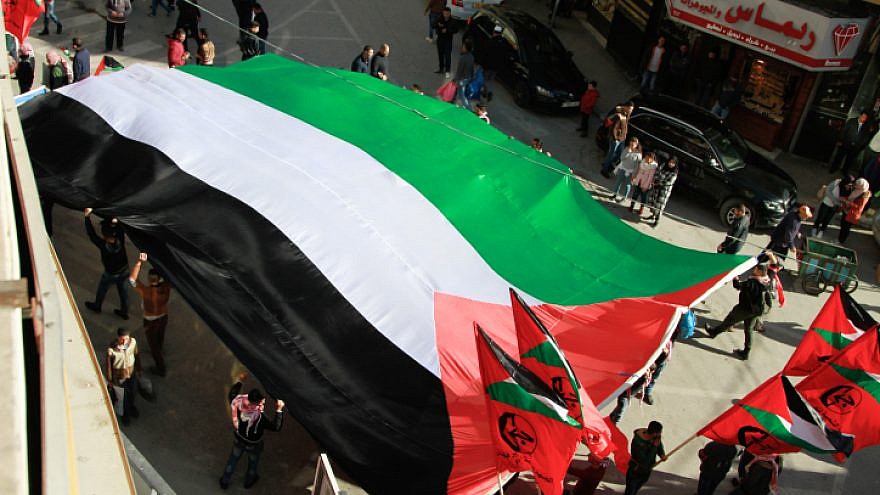 Popular Front for the LIberation of Palestine (PFLP) supporters in Nablus during a rally marking the 51st anniversary of Hamas's founding in the West Bank, Dec. 15, 2018. Photo by Nasser Ishtayeh/Flash90.
Spread the word.
Help JNS grow!
Share now:

The convicted terrorist, Salah Hamouri, was currently a lawyer and field researcher for the Addameer Prisoner Support and Human Rights Association, a group linked to the Popular Front for the Liberation of Palestine terrorist organization.

He was previously sentenced by an Israeli court to seven years in prison, as part of a plea bargain in exchange for admitting to plotting to murder the former Sephardic Chief Rabbi Ovadia Yosef. Hamouri was released by Israel as part of the 2011 Gilad Schalit prisoner exchange deal with Hamas.

Born to a French mother and a Palestinian father in Kafr Aqab, a neighborhood in northeastern Jerusalem, Hamouri retains French citizenship and his wife and children reside in France.

The deportation was implemented by the Interior Ministry’s Population and Immigration Authority and its Enforcement and Foreigners Administration.

“He has for many years been active among the ranks of the Popular Front [for the Liberation of Palestine] terror organization,” according to Mako.

“He has incited and plotted terror attacks on his own and for the organization against civilians and prominent figures in Israel,” said the report. Hamouri has also been under administration Israeli detention on a number of occasions due to suspicions that he continued to be involved in terrorist activities.

“Today, in good time, the law has been implemented against the terrorist Saleh Hamouri and he was evicted from Israel,” Shaked said in a statement.

“This has been a lengthy procedure and it is a major achievement, a moment before ending my term I was able to lead to his eviction using the tools at my disposal and to promote the fight against terrorism,” the minister added. “I hope that the incoming government continues this policy and evicts terrorists from Israel.”