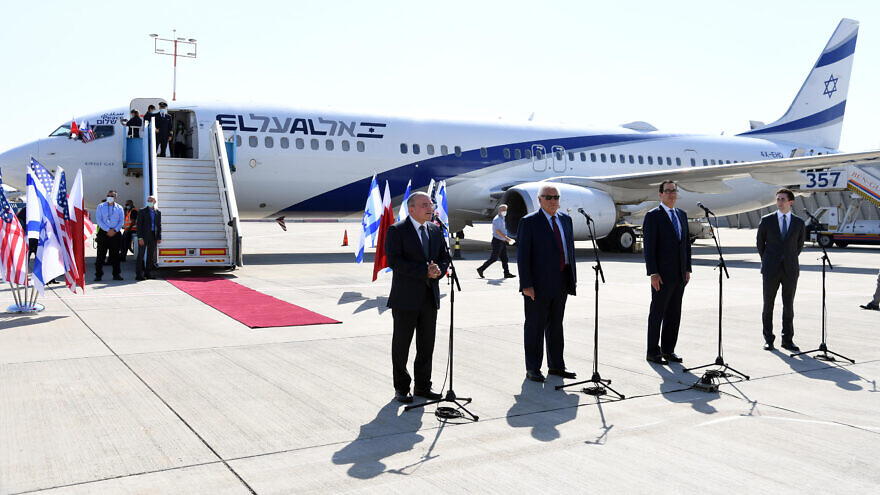 (October 18, 2020 / Israel Hayom) A U.S.-Israeli delegation landed in Manama on Sunday, via a direct El Al Airlines flight from Tel Aviv, to finalize the terms of the normalization agreement signed by Israel and Bahrain at the White House on Sept. 15.

The delegation was received by Bahraini Foreign Minister Abdullatif bin Rashid Al Zayani, who called for a “genuine and lasting peace, one that safeguards the rights of the Middle East’s peoples.”

U.S. Treasury Secretary Steven Mnuchin, the head of the American delegation, which included U.S. Ambassador to Israel David Friedman, said he hoped that the United States would soon be able to announce more agreements between Israel and Arab states.

Israeli National Security Adviser Meir Ben-Shabbat, who led the Israeli delegation, said at the greeting ceremony that “Israel has an outstretched hand for real peace, and we look forward to hosting you, too.”

On the tarmac at Ben-Gurion International Airport before boarding Flight 973 (a nod to Bahrain’s telephone country code), Ben-Shabbat said the purpose of the visit was to “translate the peace declaration that was signed on the White House lawn by U.S. President Donald Trump, Israeli Prime Minister Benjamin Netanyahu and Bahraini Foreign Minister Dr. Abdullatif bin Rashid Al Zayani, on behalf of King Hamad bin Isa Al Khalifa, into practical plans and concrete agreements.”

Discussions would be conducted by professional teams and working groups on a series of issues, he said, including finance and investments, trade and economy, tourism, aviation, communications, culture, science, technology, agriculture and others.

“We are excited, and together we will pray that God might lead us to peace and that we might reach our destination for good life and peace,” he said.

The delegations’ visit comes a month after the United Arab Emirates and Bahrain signed the historic Abraham Accords on the White House lawn. Experts believe that both Gulf countries got the blessing of Saudi Arabia to normalize ties with Jerusalem, a theory supported by Riyadh’s recent decision to grant Israeli carriers the right to fly over Saudi airspace.

Trump has repeatedly said that more countries are expected to join this initiative with Israel. Netanyahu has claimed the new thaw in relations between Israel and Arab countries is proof that Israel can make peace without making territorial concessions and that normalization is not contingent on progress in Israeli-Palestinian talks. Both Israel and the Sunni Gulf states share a concern over Iran’s malign influence and meddling in the region, and the newly announced ties reflect this de facto alliance.

“The delegations will now work on cooperation agreements and establishing a peace agreement with Bahrain,” he said. “This is an additional breakthrough in our relations with the Arab world thanks to the new and different policy that we are leading. It is not so new because we have been leading it for 25 years but it is bearing fruit today—peace for peace, economics for economics. This is a very moving day. I hope that we will be able to tell you soon about additional countries.”