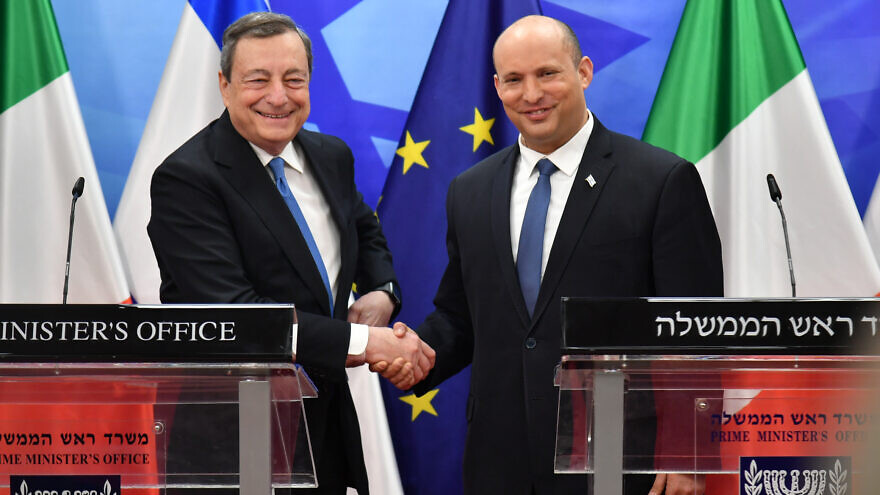 (June 14, 2022 / JNS) Israeli Prime Minister Naftali Bennett and visiting Italian Prime Minister Mario Draghi have agreed to hold a full government-to-government meeting in Israel for the first time in almost a decade, Bennett announced during a joint press conference with Draghi in Jerusalem on Tuesday.

The two leaders met privately before holding a larger meeting with the involvement of Israeli Energy Minister Karin Elharrar.

During his joint appearance with the Italian premier, Bennett also addressed ongoing tensions with Lebanon over maritime borders and rights to drill an offshore gas field, saying that he waited for the day when Lebanon would decide that it’s ready to benefit from its underwater natural resources, instead of being engaged in internal and external feuds.

Bennett stated that the Italian and Israeli peoples are both examples of modern independence that was renewed in ancient lands, and that both nations inherited principles and ideas from their ancient forefathers who founded their nations. Both nations also contributed greatly to the advancement of civilization and open societies, he noted.

Draghi is on his first Middle East trip since taking office last year, with energy and food security being key items on his agenda, according to AFP.

He also made a stop in the West Bank city of Ramallah, greeted by Palestinian Authority Prime Minister Mohammad Shtayyeh.