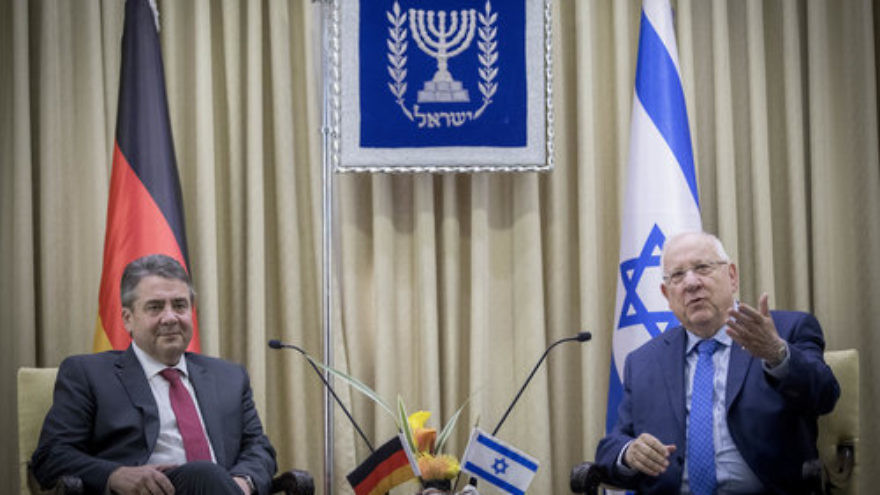 (April 27, 2017 / JNS) A diplomatic spat between Israel and Germany has provided a prominent platform for research that documents the European Union’s funding of the BDS movement and terrorism.

Israeli Prime Minister Benjamin Netanyahu canceled a meeting with German Foreign Minister Sigmar Gabriel in Jerusalem April 25, due to the latter’s insistence on meeting with nonprofit organizations that campaign against the IDF and alleged Israeli human rights violations.

Netanyahu’s move came after he issued Gabriel an ultimatum to terminate his scheduled meetings with representatives from B’Tselem and Breaking the Silence.

“My policy is clear: not to meet with diplomats who visit Israel and engage with organizations that slander Israeli soldiers and seek to have them put on trial as war criminals,” Netanyahu said.

Gerald Steinberg, a professor of political science at Bar-Ilan University and president of the Jerusalem-based research organization NGO Monitor, told JNS.org that European funding and German state funds in particular enable “fringe groups like Breaking the Silence to travel the world attacking the IDF.”

“In his actions, Prime Minister Netanyahu is seeking to put this irresponsible NGO funding by Europe on the agenda, and to trigger long-overdue changes,” Steinberg said.

Israeli Deputy Foreign Minister Tzipi Hotovely commended Netanyahu for taking a stand against the anti-Israel organizations, while Deputy Minister for Diplomacy Michael Oren said it was actually the German minister’s choice to nix the meeting.

“[Gabriel] is the one who made the inexplicable decision not to go ahead with the state meeting,” Oren told Army Radio.

Oren, who also canceled his scheduled meeting with the foreign minister, indicated that Gabriel may have been looking to stir up controversy, citing previous instances in which European political figures had interfered “in our (Israel’s) own problems for their own benefit.”

German Chancellor Angela Merkel said Wednesday that Netanyahu’s refusal to meet with her foreign minister was “regrettable,” while Gabriel told reporters that Netanyahu’s cancelation was “not nice.”

Gabriel instead met with Israeli President Reuven Rivlin in Jerusalem. The foreign minister, who previously served as chairman of Germany’s left-wing Social Democratic Party and has called Israel an “apartheid regime,” asserted that the spat with Netanyahu would not affect relations between the countries.

“You can absolutely be sure we are committed to the friendship, the partnership and the special relationship with Israel, and nothing will change this,” said Gabriel.

Rivlin addressed the debate surrounding Gabriel’s visit, saying, “We know how to maintain our army as the most moral in the world, and we will continue to do so.”

Netanyahu’s decision to cancel the meeting with Gabriel came almost a year after the Israeli Knesset passed the “NGO Transparency Law” in July 2016, requiring organizations that receive more than half of their funding from foreign governments to publicly disclose that funding.

The law, which was sponsored by Israeli Justice Minister Ayelet Shaked (Jewish Home) and supported by Netanyahu, was heavily criticized by the EU, which said the measure goes “beyond the legitimate need for transparency.”

The spat with the German foreign minister also followed the April 20 publication of an NGO Monitor report detailing funding provided by European governments to Palestinian civic organizations with ties to the Popular Front for the Liberation of Palestine (PFLP), a terrorist organization.

The research group’s report lists nearly a dozen organizations affiliated with the PFLP, which received funding from the EU in spite of the group being designated as a terrorist organization by the U.S., EU, Canada and Israel.

All of the organizations listed in the Palestinian terror group’s network are also strong advocates of the anti-Israel BDS movement, which works to economically undermine the Jewish state as a precursor to its destruction.

“The EU and its member states have a major NGO problem,” said NGO Monitor’s Steinberg. “These governments distribute hundreds of millions of taxpayer funds every year to non-governmental organizations, including many political groups outside of Europe, without any systematic oversight.”

“The result, as demonstrated in NGO Monitor reports,” he said, “is that money goes to ‘human rights’ groups that are linked to terror organizations, promote violence, engage in blatant anti-Semitism and lead BDS.”