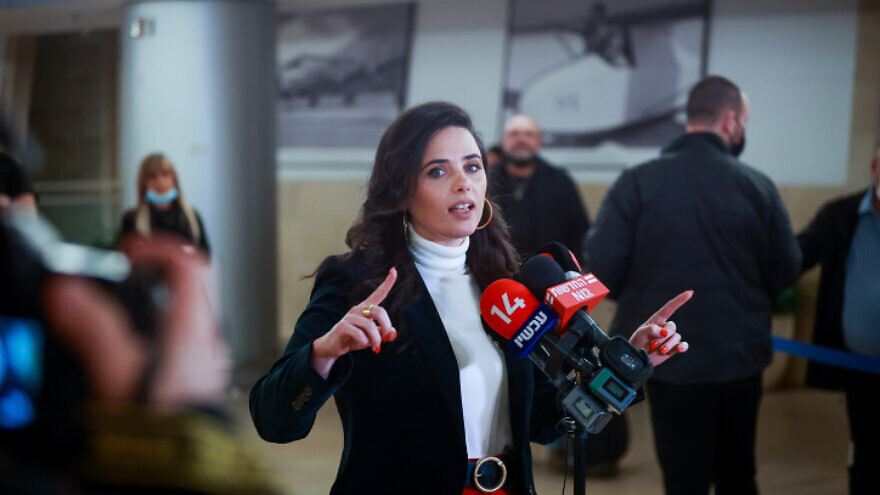 (May 16, 2022 / JNS) Israeli Interior Minister Ayelet Shaked said on Monday that she would veto any attempt by other parties in the coalition to amend the Nation-State Law.

“I recommend that my friends in the coalition stop amusing themselves by thinking they can make changes in Basic Laws that are not agreed upon,” Shaked tweeted on Monday morning. “It won’t happen, as is set [out] in the coalition agreement.”

Shaked was responding to calls by other ministers to change the Basic Law: Israel—The Nation-State of the Jewish People, approved in July 2018, which states: “The State of Israel is the nation-state of the Jewish people, in which it fulfills its natural, religious, and historic right to self-determination.” The law also says that “the fulfillment of the right of national self-determination in the State of Israel is unique to the Jewish people.”

Calls to amend the law to recognize the individual rights of non-Jewish Israelis were raised after the Israel Defense Forces revealed on Sunday the name of a Druze special forces officer killed during a blown undercover operation in the Gaza Strip in November 2018.

Responding to the news, Israeli Finance Minister Avigdor Lieberman tweeted: “There is a clear contradiction between the Nation-State Law in its current version and the eulogies given in honor of Lt. Col. Mahmoud Khier al-Din.”

Foreign Minister Yair Lapid of the Yesh Atid backed Lieberman, tweeting, “I agree with every word.”

Defense Minister Benny Gantz of the Blue and White Party added his support for the reform as well on Sunday, tweeting on Sunday that “the time has come to anchor individual equality in basic law.”