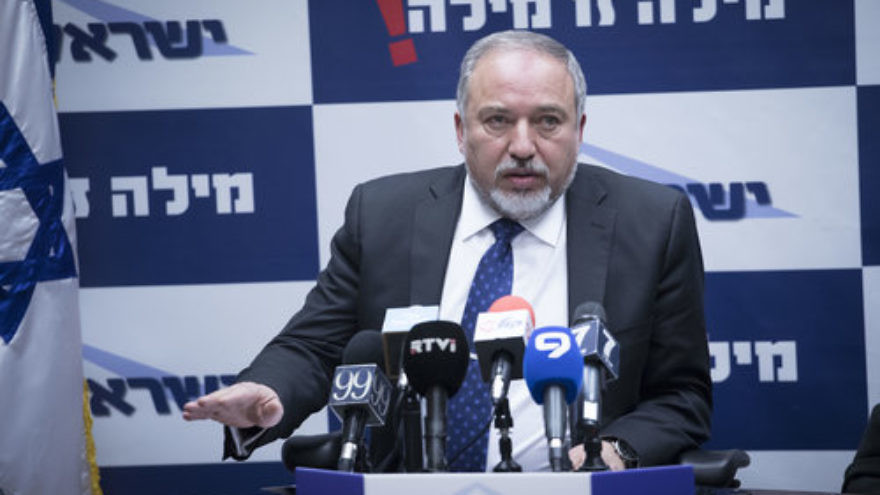 (March 17, 2017 / JNS) After Israeli Defense Minister Avigdor Lieberman this week reiterated his plan for population swaps in any future peace deal with the Palestinians, some Middle East experts and Israeli politicians have deemed the concept unrealistic and potentially harmful to Israel’s security.

“There is no reason that Sheikh Raed Salah, Ayman Odeh, Bassel Ghattas or Haneen Zoabi will continue to be citizens of Israel,” Lieberman said in a Facebook post, mentioning Arab political figures who all have histories of anti-Israel statements and have been accused of incitement. Ghattas reached a plea deal Thursday to serve two years in prison over allegations that he smuggled cell phones to Palestinian security prisoners.

Lieberman suggested that a greater number of Israeli Arabs—not just those lawmakers—be included in a Palestinian state, saying, “The only way to a sustainable agreement is through land and population swaps as part of a larger regional peace deal….It cannot be that a hegemonic Palestinian state will be established, without a single Jew—100 percent Palestinian, and Israel will be a bi-national state with 22 percent Palestinians.”

Some experts fear the defense minister’s plan—which he has repeatedly promoted on past occasions—would be difficult to implement and would narrow Israel’s land, bringing the border closer to the heart of central Israel, to cities such as Petah Tikva, Rosh Haayin and Kfar Saba.

Further, by surrendering Israeli-Arab villages near the so-called Green Line (1949 armistice line) in Lieberman’s proposed swaps, Israel would lose some of its ability to monitor that area and deploy security forces there.

“Legally, [Lieberman’s] option might be realized only as part of an agreement between both sides, but it is not reasonable to do such a thing without the will of the people themselves,” said Kobi Michael, a senior research fellow at the Institute for National Security Studies (INSS) in Tel Aviv.

“But leaving aside the legal and moral aspects, the idea could be implemented only in very specific areas,” Michael told JNS.org, referring to the fact that not all Israeli Arabs—who are citizens with full civil rights—live within the Arab-majority villages straddling the Green Line. The scholar described Lieberman’s plan as “dangerous, irresponsible and a provocation.”

Michael acknowledged, however, that Israeli Arabs in the northern Galilee and southern Negev regions, as well as in mixed Jewish-Arab cities like Jaffa, Haifa and Akko, would not be touched by Lieberman’s swaps.

“Eventually, the idea could be implemented with regard to less than one-third of the Arab population of Israel,” he said.

On a political level, Lieberman’s plan would be extremely unlikely to pass muster because many right-wing Members of Knesset oppose any withdrawal from Israeli territory or a two-state solution. In particular, many Likud party MKs would oppose such a move, as would Jewish Home leader Naftali Bennett, whose party has been pushing for the opposite approach—annexing territory and opposing a two-state solution.

“The ongoing conflict between Jews and Arabs is not the result of a territorial dispute, but a dispute between identities,” Moshe Feiglin, a former Likud Knesset member, told JNS.org.

Lieberman’s land swaps not only fail to solve the peace problem, but they actually magnify the conflict by continuing to ignore the real issue of identity, said Feiglin, who left the Likud party to start a new political movement called “Zehut”—translated from Hebrew as “identity.”

“Peace can come only when Jews stop trying to flee their identity and recognize that the land of Israel is its country. This is our land!” he said.

A serious plan or a debate point?

Other than the population swaps, what alternative solutions to the conflict are being floated in Israel these days? Israeli Interior Minister Aryeh Deri has reportedly been pushing to strip the citizenship or residency permits of Arab terrorists and their families. Another current idea is to incentivize Israeli Arabs to emigrate. But such plans—like Lieberman’s proposal—are generally considered controversial and difficult to implement, due to political and judicial opposition.

As such, proposals like Lieberman’s may amount to nothing more than rhetoric.

Daniel Pipes, a historian and the president of the Middle East Forum think tank, told JNS.org that Lieberman’s proposal “is cleverly flipping the Palestinians’ rhetoric on themselves: ‘A judenrein (free of Jews) Gaza and West Bank, you say?’ Well, he replies, ‘Israel will then be without Muslims.’”

Asked if the plan is realistic, Pipes said, “I see this as scoring a debate point more than forwarding a serious policy proposal, for Israelis and their supporters worldwide will not go in this direction. But it is an effective debate point that shows up an endemic Palestinian racism that, regrettably, otherwise goes unremarked.”

“Lieberman knows well that this [plan] is only a slogan he uses in order to keep his image among the Israeli political right,” Michael said. “He is a cynical politician who has no problem changing positions according to the political circumstances.”