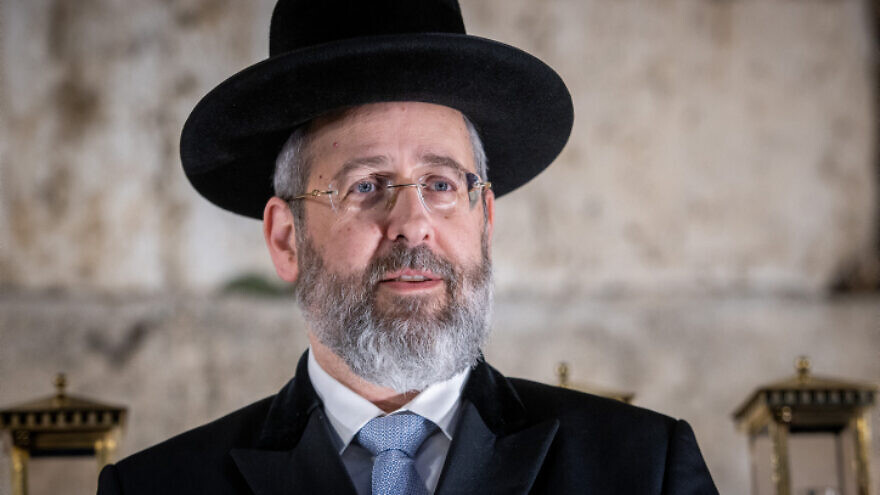 (December 29, 2021 / Israel Hayom) Israel’s Chief Rabbi David Lau has warned that if the head of the Conversion Authority is removed as part of a planned conversion reform, he will immediately stop signing off on conversions, effectively bringing them to a halt.

In a harshly worded letter to Israeli Prime Minister Naftali Bennett, Lau informs Bennett “with great regret” that if the reforms are passed and Rabbi Moshe Weller is removed as head of the Conversion Authority, “I will be forced to remove myself from any responsibility for conversions, and will immediately stop approving any conversion certificates issued under [the new system].”

The reforms to Israel’s conversion system, initiated by Israeli Religious Services Minister Matan Kahana, would among other things allow city rabbis to operate conversion courts. The plan aims to help tens if not hundreds of thousands of Israeli citizens of Jewish heritage who are not recognized as Jewish to convert. The conversion reform bill is due to be presented to the Knesset plenum for a first reading on Wednesday.

“Removing from office the person who is in charge of implementing halachic instructions cuts off the connection between the conversion system and the Chief Rabbinate, and will lead to a disconnection and lack of halachic responsibility for what happens during conversions,” it continues.

“Unfortunately, this step is part of a dangerous trend to promote a system of conversion that is currently being discussed. I once again state that the proposed conversion reforms will cause a massive rift in the Jewish people that cannot be healed,” Lau warns.

Responding to Lau’s letter, Kahana said, “It’s painful to see that the chief rabbi intends to stop conversion in Israel just because a functionary’s job has not been extended. The move will hurt new immigrants from Ethiopia, IDF soldiers seeking to convert, and thousands of other potential converts.”

Kahana said that in an attempt to reach as broad a consensus as possible, the government was promoting a conversion reform bill that would allow Israelis that wish to convert to do so in accordance with Jewish law. He urged Lau to reconsider his intention of stopping conversions and continue the dialogue, so all sides concerned could reach better agreements about government-run conversion that follows Jewish law.

Associates of Kahana accused Lau of going “out of bounds.”

“Stopping all conversions is the ‘nuclear option,’ and the strongest tool against converts. It’s an immoral, unjustified act,” they said

Associates of Aliyah and Integration Minister Pnina Tamano-Shata said that she would “not allow the rights of immigrants to be violated.”

A statement put out in the chief rabbi’s name said: “The chief rabbi is defined by law as head of the Jewish people and signs off on every conversion to the Jewish religion. As part of this, the rabbi has the head of the Conversion Authority, whom he appoints to ensure that conversions take place in accordance with the rules of Jewish law.

“The moment that person is dismissed and the rabbi has no way of knowing according to what rules conversions were carried out, the chief rabbi will by no means sign off on any conversion, regardless of the identity of the convert and what country they come from, without knowing with certainty that it was conducted according to Jewish law, as detailed in the rabbi’s letter to the prime minister.”