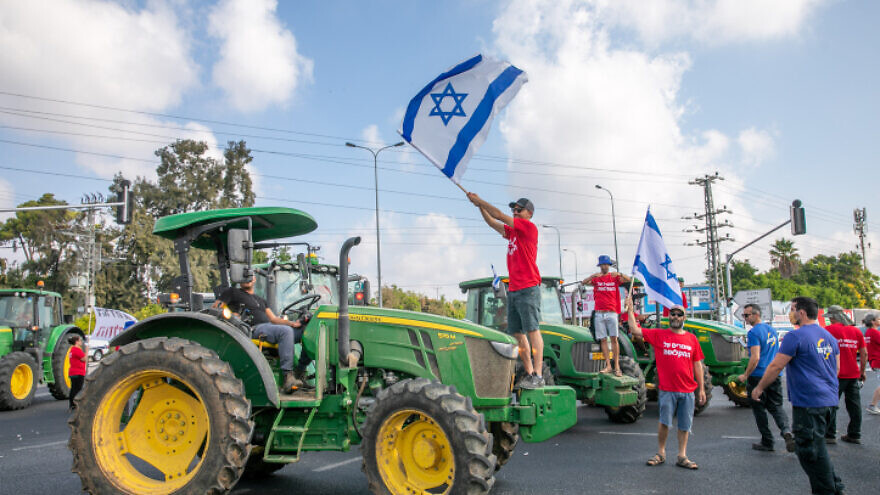 Israeli farmers block junctions all over Israel in protest of the Finance and Agriculture ministries plan to open up the fruit and vegetable market for import, at the Bilu Junction, on July 29, 2021. Photo by Yossi Aloni/Flash90.
Republish this article
869 WORDS
Spread the word.
Help JNS grow!
Share now:

(August 2, 2021 / JNS) Israel’s farmers are ready for a battle, and before firing their first shot, they have already given the campaign a name, “Operation Shield of Agriculture: Guardians of the Borders.” The target they have in their sites is Israel’s Ministry of Finance, and their strategic aim is to defeat a reform being pushed by Finance Minister Avigdor Lieberman that would open the country up to agricultural imports in a bid to bring down its notoriously high cost of living.

On July 21, Lieberman and Agriculture Minister Oded Forer, both of the Yisrael Beiteinu Party, announced a plan to gradually lift import restrictions and duties on fruits, vegetables and eggs. The reform, they said, would save Israelis some NIS 2.7 billion ($830 million) a year, or about NIS 840 ($258) per household.

Under the terms of the proposed reform, farmers will receive direct subsidies totaling NIS 420 million ($129 million) per year to compensate them for competition based on the amount of land they farm. The farmers will also receive tax benefits and increased allocations to import foreign workers. In addition, budgets will be allocated for agricultural R&D and capital investments to increase productivity.

The reform further stipulates that the country of origin will be marked on all agricultural produce in order to encourage Israelis to buy Blue and White.

But the farmers aren’t buying it. 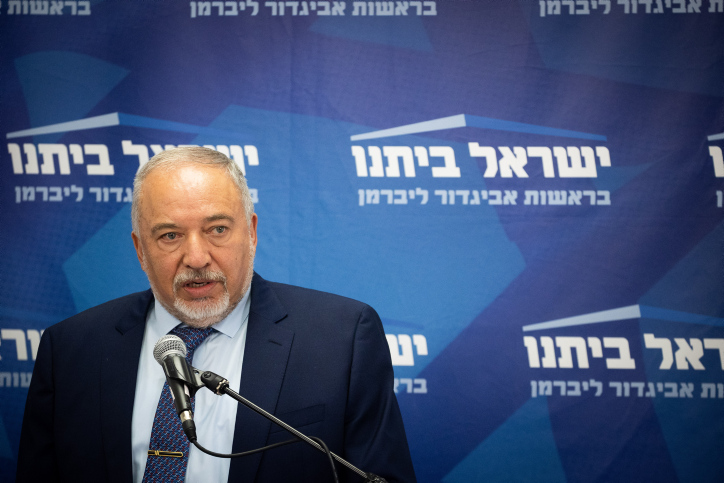 Israel Beitenu party chairman Avigdor Liberman speaks during a faction meeting at the Knesset, the Israeli parliament in Jerusalem, on July 26, 2021. Photo by Yonatan Sindel/Flash90

Supporters of the reform say the farmers are crying wolf, pointing to a similar reform that allowed butter imports after severe shortages in 2019. Milk producers warned against the measures, claiming that if imports were canceled, the local industry would collapse.

‘It will make the tycoons even stronger’

According to the treasury, the cost of fruits, vegetables and eggs has risen by as much as 80 percent over the past few years. But farmers say they are not to blame, and that prices can be reduced without lifting the prohibitive duties on imports. They say that high prices result from several factors, including the high cost of water for agriculture, and, in particular, the high levels of concentration in Israel’s food market that enable middlemen and supermarkets to make excessive profits off the backs of consumers while farmers are paid rock-bottom prices.

The farmers note that when import duties have been temporarily lifted in the past to overcome shortages, the price paid by consumers has not come down.

“The reform won’t create competition; it will just make the tycoons even stronger,” Yaron Solomon of the Farmers Union tells JNS. “Lifting of import duties will help farmers in neighboring countries and the finance minister’s tycoon buddies; we have already seen in the past that they don’t pass reduced costs on to the public.”

Moreover, he adds, “the reform will hold Israeli consumers hostages to foreign elements because imports could be halted at any moment due to international sanctions or boycotts of Israel.”

However, the farmers have been careful not to put forward a position completely opposed to reform, but say they must be consulted with and provided far greater support. A compromise could be on the agenda.

“The cost of the reform is estimated at NIS 3 billion ($925 million) a year, while the treasury is offering the farmers a pittance and is spitting in their faces. … I call on the ministers of finance and agriculture to review the reform, which in its current format will cause enormous damage,” says Vilan.

On July 29, the farmers fired the opening salvo of “Operation Shield of Agriculture” as they blocked major traffic arteries in several locations around the country. But they have a far more powerful weapon—namely, the agricultural lobby, which is strongly represented in the Blue and White and Labor parties, Yisrael Beiteinu’s coalition partners.

“Israel’s ability to supply its own food is critical,” said Blue and White MK Ram Ben Barak, head of the Knesset’s agricultural lobby and a former deputy director of Mossad. “We are in favor of a reform that will ensure food security, and that will look at the support offered to farmers, at the cost of water and at enabling Israel’s farmers to compete with imports.”

Labor chair Meirav Michaeli said her party was “committed to the kibbutzim and moshavim, to the farmers and to agriculture.” The head of the Labor Knesset faction, Ram Shefa, a kibbutz member from Givat Haim in the Hefer Valley, put it bluntly: “Without changes to the reform, there will be challenging days ahead for the coalition.”

While despite those strong words, such reform was included in the budget agreed by the coalition on Aug. 1, the budget will still need to pass three parliamentary readings to pass into law. The budget has to pass by Nov. 4 or the coalition will fall.

Horse-trading is an integral part of Israeli budget negotiations, and Lieberman may well find that to get the two-year spending plan approved, he will have to make significant changes to the current format of the agricultural reform.