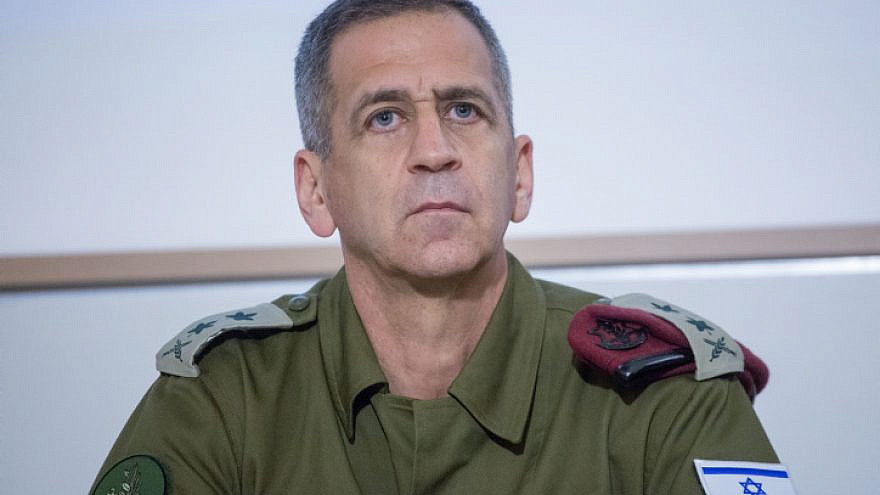 (January 28, 2021 / JNS) When assessing the comments made earlier this week by Israel Defense Forces Chief of Staff Lt. Gen. Aviv Kochavi, who warned against the return to the 2015 nuclear deal with Iran, it is useful to envisage two red countdown clocks.

The first is counting down the time left until Iran is able to break through to nuclear-weapons production capability.

Iran does not have to build an atomic bomb to reach the status of a breakout state. It merely needs to come within “striking distance”—close enough that it can make the decision to take the final steps in the nuclear bomb-making process in little time when it so chooses.

The second clock measures a currently an entirely unknown quantity—the time left until the Islamic regime in its current form might fall, or alternatively, experience a profound domestic political change that alters its radical ideological DNA for the better (to be clear, there is no clear sign at this time that this is close to happening). Such a change would see an end to Iran’s commitment to destabilizing the region, its program to build an axis of highly-armed radical proxies, nourishing them with advanced weapons and funds, and encouraging them to launch wars of attrition against moderate Sunni states and Israel alike.

Both of these timetables can be moved backwards and forwards in line with developments. Ultimately, those who hope for a sustainable Middle East—in which alliances of moderate countries can overcome major challenges and cooperate on building a better future—must also hope that the nuclear clock does not run out faster than the clock on Iran’s regime.

For if Iran’s hardliners—dominated by ayatollahs and the military elite from the Iranian Revolutionary Guards Corps—do reach nuclear breakout status, the future of the region will become grim.

Kochavi called on sanctions to continue “in every way,” saying “Iran today … is under the heaviest economic pressure, suffering from huge inflation, an embittered population, with sinking trade.”

Iran is currently taking measured steps in this direction. Even if those steps are merely designed to enter into negotiations with the new administration under U.S. President Joe Biden from a position of better strength, the outcome of those negotiations will be decisive for the future of the Middle East.

It is in this context that Kochavi made his comments on Tuesday at an online conference held by the Tel Aviv-based Institute for National Security Studies. He surprised many during his speech—and drew considerable criticism—by publicly taking a forceful stance against a return to the 2015 nuclear deal, formally known as the Joint Comprehensive Plan of Action (JCPOA).

He stated that there is no doubt that Iran wants to build a military nuclear capability “and even maybe to make use of the bomb at the moment that it takes the decision.”

This sentence alone reflects Kochavi’s thinking: the need to prepare for worst-case scenarios and not to wave them away, even if most assessments hold that Iran is fully capable of a cost-benefit analysis and rational calculations, and would not use a nuclear weapon even in the event that it manages to produce one.

Kochavi is not interested in leaving the question up to the Iranians to answer, or perhaps, to a future faction that takes control of the regime in Iran—not because he necessarily believes that the Iranians would deploy an atomic weapon, but because the mere threat of this happening presents an intolerable deterioration of the regional security picture, which would create a domino effect of cascading consequences.

One of them would be the likely ignition of a regional nuclear arms race with Sunni states threatened by Iran racing to get their own programs up and running. Such a race in the world’s least stable region might begin even before Iran officially becomes a nuclear state.

In his remarks, Kochavi tackles the most problematic aspect of the 2015 deal—its sunset clauses.

He argued that the nuclear agreement would have eventually enabled Iran to get a bomb because it did not contain permanent key restrictions. When it was signed in 2015, the deal contained a number of sunset clauses, the most important of which expire between 2025 and 2031.

By 2031, restrictions on centrifuges, uranium enrichment levels and quantities of stockpiled uranium all expire. 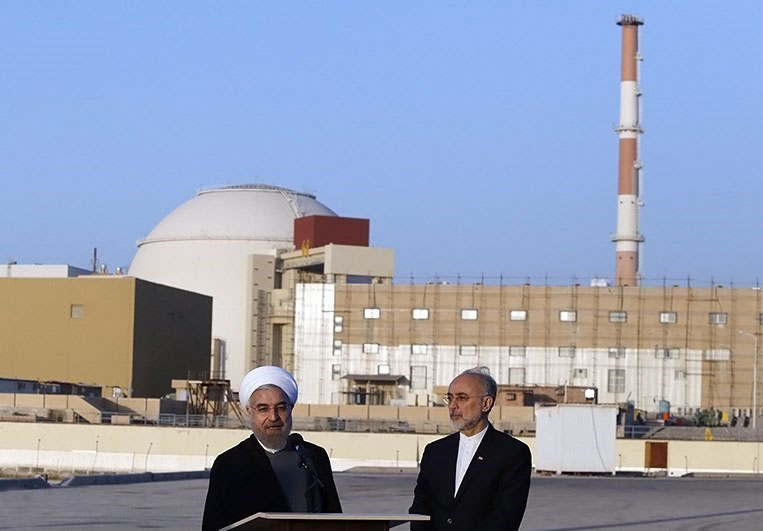 Meanwhile, Iran has been free to research and develop more advanced centrifuges, which, when installed, significantly cut down the time needed to enrich quantities of uranium needed for nuclear weapons.

While defenders of the agreement claim that sunset clauses do not open the door to nuclear breakout, Kochavi—relying on an array of high-quality intelligence assessments—clearly disagrees.

When looked at in 2015, the deal, despite all of its flaws, could still be viewed as useful for buying a period of quiet, during which Israel could shift resources away from the need to build an immediate long-range attack plan and towards other pressing needs, such as the need to prepare an updated level of war readiness against Hezbollah and Hamas, and preventing the takeover of Syria by the Iranian axis.

But in 2021, those current sunset clauses would expire too soon for comfort—meaning that the deal as it stands no longer carries strategic value.

With no sign of Iran’s hardline Shi’ite ideological camp and IRGC losing their grip on power, as they continue to control all foreign and military policies, there is no reason to assume that the Islamic Republic will not resume its nuclear program when the sunset clauses run out.

Kochavi noted these dangers before stating that a “return to the nuclear deal from 2015 or even a similar deal with a few improvements is bad and wrong. It is wrong operationally and strategically. Operationally, because it would again allow at its end, or before, the Iranians to enrich uranium, develop centrifuges, and a weapons capability [taking them up to] breakthrough. Strategically, it would present an intolerable threat to Israel and apparently spark a nuclear arms race in the Middle East. Hence, anything that resembles the current deal or an improved [version of that] agreement is wrong.”

He called on sanctions pressure to continue “in every way,” saying “Iran today … is under the heaviest economic pressure, suffering from huge inflation, an embittered population, with sinking trade.”

He also called for avoiding any action that gives the regime new oxygen, instead seeking an arrangement that not only delays Iran’s ability to make a bomb but removes it permanently.

A parallel debate is underway in Israel over whether the discussion with the United States on Iran should take place openly or behind closed doors. Some have called for Israeli reservations over the next possible agreement to be transmitted to Washington discreetly in order to avoid breaches with the new administration, as well as to safeguard Israel’s most important alliance, which remains critical for Israel’s national security in a myriad of ways. This position seems legitimate and well-reasoned.

In May 2015, Israeli Prime Minister Benjamin Netanyahu addressed the U.S. Congress warning against the deal, yet failed to sway the Obama administration in any way.

Position Israel as leader of a regional anti-Iranian bloc

Kochavi is undoubtedly well aware of these arguments, yet still chose to go public with his warning. The question is why.

One possible reason could be a wish to create a regional, coordinated position shared by Israel and pragmatic Sunni states, all of which are threatened by Iran’s nuclear program. Kochavi’s statement, which has drawn criticism from a number of former defense officials, may be intended to position Israel as the leader of a regional anti-Iranian bloc that does not shy away from sounding the alert, even to close friends.

To drive the point home even further, Kochavi noted in his speech that Iran can, despite the current pressure, still make an overt or covert decision to go for atomic bombs, adding, “Due to this basic analysis, I have ordered the IDF to prepare operational attack plans in addition to those that exist. We are diligently going over these and developing them in the coming year. It is the government that decides whether to activate them, but the plans must be on the table, ready and drilled.”

According to a recent report by Ynet, Kochavi has asked for a 3 billion shekel cash injection for the fresh attack plans and has reportedly received the support of both Netanyahu and Defense Minister Benny Gantz, who served as IDF chief of staff from 2011 to 2015.

Another key aspect in Kochavi’s speech was his recognition that Iran will not give up its plans to build a war machine in Syria, despite slowing down such efforts in the face of a series of preventative Israeli bombings.

While some voices in Israel had hoped that Iran would see the pointlessness of continuing to invest large resources in its Syria takeover program, after running into a brick wall of Israeli airstrikes, Kochavi noted that Israel’s successes in disrupting the Iranian program are not going to translate into an abandonment of its long-term objectives.

This would suggest that the Israeli-Iranian shadow war raging in Syria since 2013 is set to remain volatile for the foreseeable future.