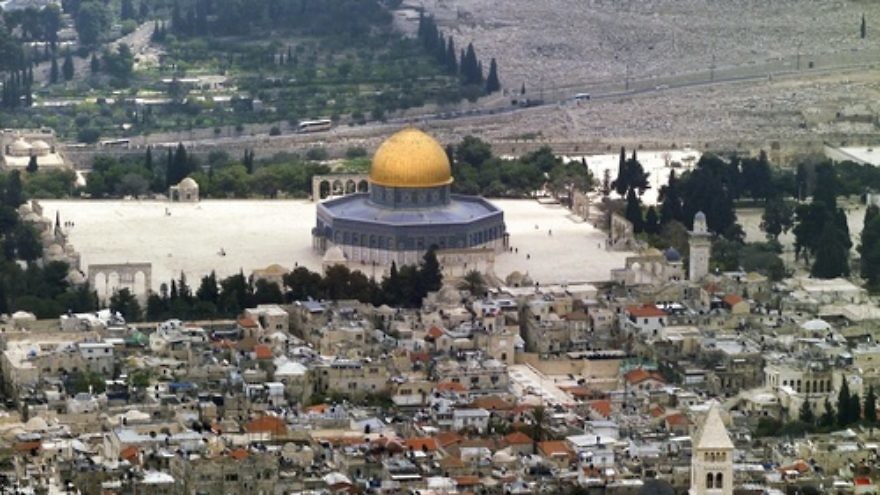 In the 1920s, the Jerusalem Waqf, the local Muslim religious authority, published and distributed a pamphlet for visitors to the Haram al-Sharif, the Temple Mount. It explained that the location is named Al-Aqsa, in accordance with the Quran reference to the place the prophet Mohammed visited on his night journey to Heaven. It indicated that the Prophet visited this site precisely because it was holy since time immemorial, and was where King Solomon built the Jewish Temple for divine service.

The Temple connection is also reflected in another of the most important Muslim names for the site, Beit Al-Maqdis, the Arabic version of Bet haMikdash, the Hebrew name for the Temple.

Today, however, it is virtually impossible to obtain any official Muslim Palestinian acknowledgement of this biblical origin of the Temple Mount. In fact, one of the most prominent Palestinian Sharia judges told me privately that only when peace comes and a Palestinian state is established with east Jerusalem—including Al-Aqsa—as its capital, would it be possible to acknowledge that history. In other words, recognition of the Jewish historical and religious connection to the Temple Mount is currently seen as a political concession.

Indeed, most Palestinian Muslims, and perhaps most Muslims in the world today, see affirmation of Jewish attachment to this site as political provocation. The issue has become an effective tool and rallying cry for those seeking to make political capital—such as Sheikh Ra’ed Salah (of the northern section of the Islamic movement in Israel), who has, in the past, inflamed the passions of thousands of young Palestinians with incendiary accusations against Israel.

Ironically, it is actually Israel that guarantees the Islamic presence on the Temple Mount, for both religious and security reasons. For centuries there has been a de facto Orthodox Jewish restriction on ascending the Temple Mount. This was formally confirmed by Chief Rabbi Avraham Yitzhak Kook and has been the official position of Israel’s Chief Rabbinate since the establishment of the state, supported by most Orthodox authorities and virtually all haredi authorities.

This seemingly paradoxical self-restriction on Jews entering their most sacred site is due precisely to its holiness. When the Temple stood, biblically mandated rites of purification were required in order to enter its precincts. The official Orthodox rabbinic position continues to maintain that since the core site remains eternally sacred, the mount is entirely prohibited to Jewish entry in the absence of the traditional purification rites.

Thus, when Moshe Dayan and Levi Eshkol reassured the Muslim authorities, after Israel captured east Jerusalem in the 1967 Six-Day War, that the Temple Mount would remain under the religious control of the Waqf, there was minimal Jewish religious opposition. Nevertheless, under Israeli secular democratic authority, Jewish visitors (overwhelmingly secular) as well as visitors of other faiths have been able to visit the site.

In recent years some Jewish religious groups and their rabbinic leaders have contested the religious prohibition against going on the Temple Mount, claiming that there is substantial historical and archaeological proof that the Temple did not stand on the southern part of the area, and that Jews should be able to enter and pray there.

But the Israeli secular courts and law enforcement agencies have prevented any organized prayer on the site, out of consideration for Muslim sensibilities and concern for possible violent Muslim reaction.

Indeed, not only because it is the third holiest site of Islam, but also precisely because of its politicization, it wouldn’t take much to strike a spark that ignites the tinderbox.

In August 1968, an Australian Christian, Denis Michael Rohan, who claimed to be “the Lord’s emissary” seeking to facilitate “the second coming” of Jesus, set fire to the pulpit of the Al-Aqsa mosque. Outrage across the Muslim world held Israel culpable. At that time, communications were nowhere near as sophisticated, immediate, and widespread as they are today, when feelings can be so swiftly and extensively inflamed.

Since then, there have been riots against Israeli archaeological digs or the visits of Israeli politicians to the site, with deadly consequences. These extreme reactions prove the wisdom of Israeli policy restricting Jewish access on the Temple Mount.

Unfortunately, Israel gets little credit for this. Recently, some Knesset members have suggested relaxing the restrictions, and allowing Jews to exercise their religious freedom and pray at the site. This has caused legitimate concern, as well as wildly exaggerated rhetoric that lends itself to political exploitation.

Most notably, there is overwhelming opposition both in the Knesset and the Israeli government to any such change. And since the Israeli religious establishment and the haredi community determinedly oppose such change, there is every reason to be confident in the continuation of Israel’s policy that guarantees exclusive Muslim religious authority on the Temple Mount.