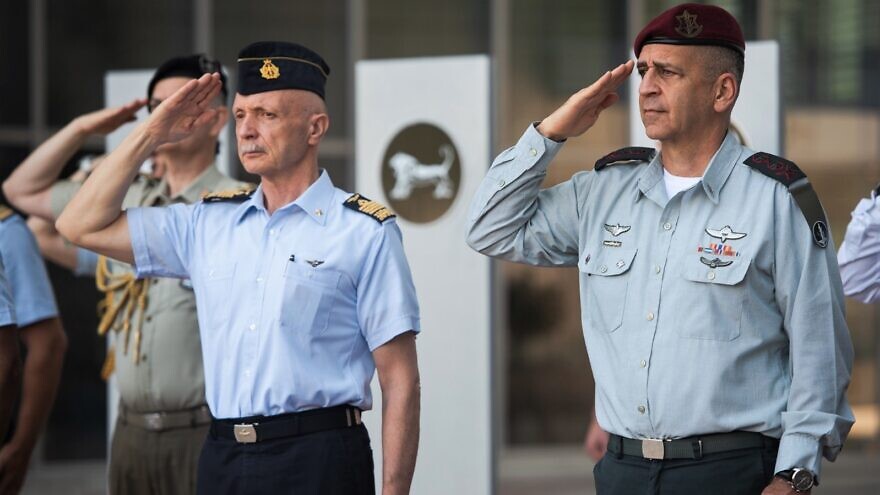 (July 14, 2021 / JNS) Chief of the Defense Staff of the Italian Armed Forces Gen. Enzo Vecciarelli completed an official visit to Israel on Wednesday, spending much of this time with the Israel Defense Forces.

He was received by a military honor guard following a meeting held with IDF Chief of Staff Lt. Gen. Aviv Kochavi.

The IDF Spokesperson’s Unit said “following his reception, a strategic panel was chaired” by Kochavi, with the participation of Brig. Gen. Efraim Defrin, head of the International Cooperation Division, as well as other senior officials from the Israeli and Italian militaries.

“The panel discussed strategic issues facing the region with a focus on the threat from Iran,” said the Israeli military. “IDF senior officials presented General Vecciarelli with dangers posed by the Iranian nuclear program and of precision-guided missiles reaching Hezbollah in Lebanon.”

Kochavi also presented conclusions from Israel’s 11-day conflict with Hamas and Palestinian Islamic Jihad in the Gaza Strip in mid-May, providing his Italian counterpart with examples of IDF efforts to avoid harming civilians during “Operation Guardian of the Walls.”

He further noted the “advantageous cooperation and close relationship between the two armies, and for Italy’s significant contributing role to the UNIFIL peacekeeping force in Lebanon,” said the IDF.

Vecciarelli concluded his visit with a series of meetings with IDF senior officials, including Maj. Gen. Amir Eshel, director-general of the Israeli Ministry of Defense; Maj. Gen. Amikam Norkin, the commanding officer of the Israeli Air Force; and head of the Planning and Force Design Directorate (J8), Maj. Gen. Tomer Bar.

“During these meetings, the IDF officials presented a range of topics, including force-building strategies, advanced combat methods and IDF technological capabilities,” said the Israeli military.