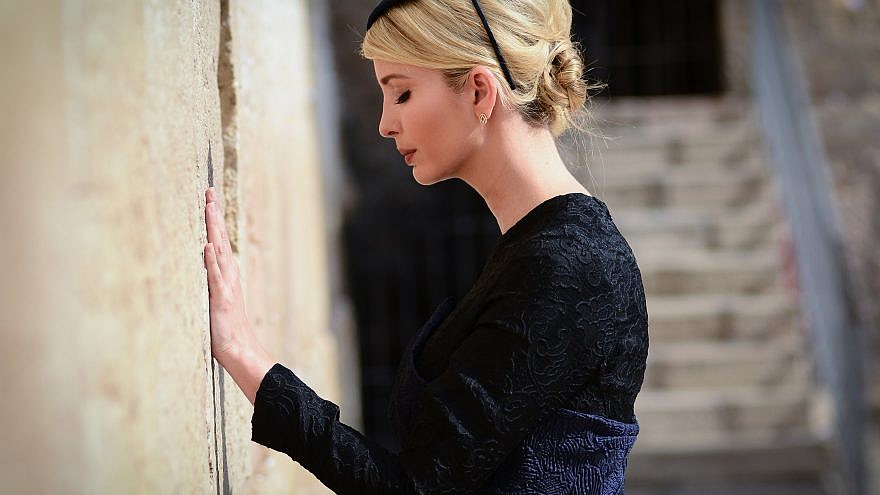 Ivanka Trump, the daughter of U.S. President Donald Trump, at the Western Wall in Jerusalem on May 22, 2017. Photo by Mendy Hechtman/Flash90.
Spread the word.
Help JNS grow!
Share now:

(June 22, 2022 / JNS) Jared Kushner, a senior adviser and envoy to the Middle East in the Trump administration—also the son-in-law of former President Donald Trump—and his wife, Ivanka Trump, visited the Western Wall in Jerusalem on Wednesday.

They were seen praying at the Western Wall (Kotel) and left prayer notes between the cracks of its stones, as is customary, reported Arutz Sheva.

Last year, Kushner established the Abraham Accords Peace Institute and tasked it with ensuring that the accords, which saw Israel normalize relations with the United Arab Emirates, Bahrain, Morocco and Sudan, reach their full potential.

“The Abraham Accords is the rare foreign-policy effort that has achieved a bipartisan consensus, and this is very, very important,” he stated in September 2021.

The Wall Street Journal reported last month that Saudi Arabia plans to invest millions of dollars in Israeli startups through a new private-equity fund set up by Kushner.

Kushner’s fund is expected to “invest Saudi money directly in Israeli companies—a symbolic measure that demonstrates the readiness of Saudi Arabia to be a part of the Israeli economy,” the Israeli business daily Globes said in May.