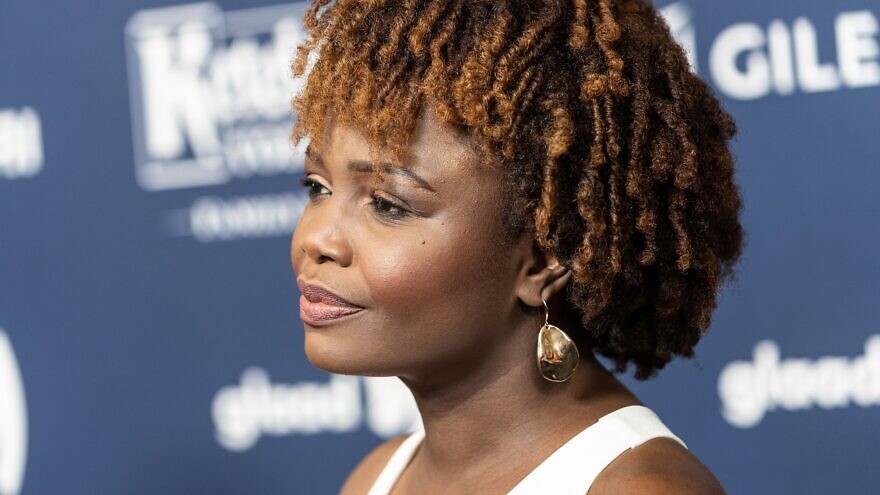 (May 10, 2022 / JNS) American Jewish organizations are divided in their reception of the new White House press secretary who has a history of taking anti-Israel positions.

U.S. President Joe Biden nominated Karine Jean-Pierre, a Haitian American who currently serves as principal deputy press secretary, to be the first black and LGBTQ person to hold the position. Jean-Pierre is slated to take over for outgoing White House press secretary Jen Psaki on Friday, though some Jewish organizations are pushing back at the president’s choice, concerned over Jean-Pierre’s previous positions on Israel and pro-Israel organizations, such as AIPAC, and what that would mean for how the Biden administration communicates its policies towards Israel.

Most of what’s known about Jean-Pierre’s perspective on the U.S.-Israel relationship comes from a period when she served as national spokesperson and senior adviser for the left-wing political group MoveOn.org from April 2016 to August 2020, a group that supported the boycott of AIPAC and challenged anti-BDS laws. Little is known about her previous thoughts on the topic.

During this time, in the run-up to the 2020 general election, Jean-Pierre wrote an op-ed in Newsweek where she suggested that supporting pro-Israel organizations such as AIPAC was not in keeping with progressive values and said that presidential candidates who skipped speaking at its annual policy conference, the last in-person conference since the start of the coronavirus pandemic in March of that year, made the “right call”. She also criticized Democratic members of Congress who did attend that year, saying AIPAC was the “antithesis” of progressive values.

“Unfortunately, AIPAC’s policy and conference speaker choices aren’t its only problems. Its severely racist, Islamophobic rhetoric has proven just as alarming,” wrote Jean-Pierre. “The organization has become known for trafficking in anti-Muslim and anti-Arab rhetoric while lifting up Islamophobic voices and attitudes.”

She continued by highlighting that the keynote speaker was then-Israeli Prime Minister Benjamin Netanyahu, who she said “not only has personal charges levied against him—he’s been indicted on both bribery and fraud charges—but under his leadership of Israel, according to the United Nations, Israel may have committed war crimes in its attacks on Gazan protesters.”

‘Americans should be deeply concerned’

Criticism of the appointment came mostly from right-leaning Jewish groups, who think that the White House is further exacerbating the out-of-control rise in anti-Semitism in the United States by appointing someone with Jean-Pierre’s record on Israel to such a forward-facing position. Meanwhile, others—from moderate to left-leaning Jewish organizations—are watching the administration, trusting that Jean-Pierre’s personal beliefs will not impact what they consider the decades-long pro-Israel record of Biden.

“The views expressed by Ms. Jean-Pierre are not consistent with the pro-Israel position of President Biden and his administration,” said AIPAC spokesman Marshall Wittmann in an email to JNS. “For that reason, the administration needs to give assurances that her hostile views on Israel will not shape policy or communications in any way.”

The American Jewish Committee took a similar view, though avoided expressing their opinion on Jean-Pierre. “We are confident that the president’s half-century record on Israel and the importance of the U.S.-Israel alliance will continue to be reflected in administration policy,” said Jason Isaacson, AJC’s chief policy and political affairs officer.

The Zionist Organization of America and its national president, Mort Klein, were among the first to punch back at the White House’s choice in a news release on Friday—Klein having written about Jean-Pierre just weeks after the 2020 election when she served as chief of staff to then-vice presidential nominee Kamala Harris.

“As a child of Holocaust survivors and as an American Jew, I am appalled and frightened that Biden has chosen Ms. Jean-Pierre, who has shown essentially anti-Semitic hostility towards Israel, and is willing to lie about and vilify Israel and Jews to promote her Israelophobic agenda,” Klein wrote in a news release. “Americans should be deeply concerned that this outrageous, incomprehensible anti-Israel, pro-terrorist and pro-Iran appointment indicates the dangerous direction the Biden administration is going to take against America’s greatest ally Israel and U.S.-Israel relations.”

Sarah N. Stern, founder and president of the Endowment for Middle East Truth (EMET), told JNS in an email on Monday that she was appalled by the choice, especially as Jean-Pierre’s views are, according to Stern, overtly anti-Israel and anti-Semitic.

She pointed out various unfair criticisms that Jean-Pierre levied against AIPAC, which Stern said “has taken great pains to be bipartisan,” such as calling AIPAC severely racist and Islamophobic, as well as the criticism of inviting Netanyahu, despite such protocol being “standard operating procedure for the pro-Israel lobbying group.”

“To sweep under the rug, overlook and ignore Ms. Jean-Pierre’s anti-Semitism in the appointment of such a critically important position is, in fact, a way of enabling it to continue to grow and develop,” she said. “This is a deeply troubling development.”

‘A position for which she is eminently qualified’

MoveOn, even before Jean-Pierre was hired, often criticized pro-Israel politicians, including Democrats. Besides fighting anti-BDS laws nationally, the group called for a Democratic donor strike against the Democratic Party after then-Minority Leader Chuck Schumer (D-N.Y.) stated publicly that he did not support the Joint Comprehensive Plan of Action (JCPOA) with Iran, in opposition to the Obama administration, which negotiated the 2015 nuclear deal.

MoveOn attacked Schumer, calling for the party to find a new leader or find itself without supporters.

“Our country doesn’t need another Joe Lieberman in the Senate, and it certainly doesn’t need him as Democratic leader,” MoveOn political action executive director Ilya Sheyman said in a statement, according to The Hill.

“She was the national spokeswoman for a far-left group that advocates for boycotts of Israel, she’s accused Israel of committing ‘war crimes,’ cheered efforts to boycott the mainstream pro-Israel AIPAC conference, and was ‘honored’ to stand alongside anti-Semite Linda Sarsour at a gala in 2017,” said Markstein. “These aren’t isolated incidents; they are a pattern of anti-Israel hostility. Jewish Americans are rightfully concerned that at a time of rising anti-Semitism, Ms. Jean-Pierre is being elevated to such an important position in the Biden White House.”

But the Jewish Democratic Council of America (JDCA) felt there was no risk of the administration’s policy’s changing as a result of the appointment, responding to criticism of the appointment in a tweet on Monday.

“[Biden] entered the White House with a five-decades-long pro-Israel record,” JDCA tweeted. “[Jean-Pierre] will support Biden’s policies; suggestions to the contrary are absurd, and Jewish Dems applaud her appointment as press secretary, a position for which she is eminently qualified.”