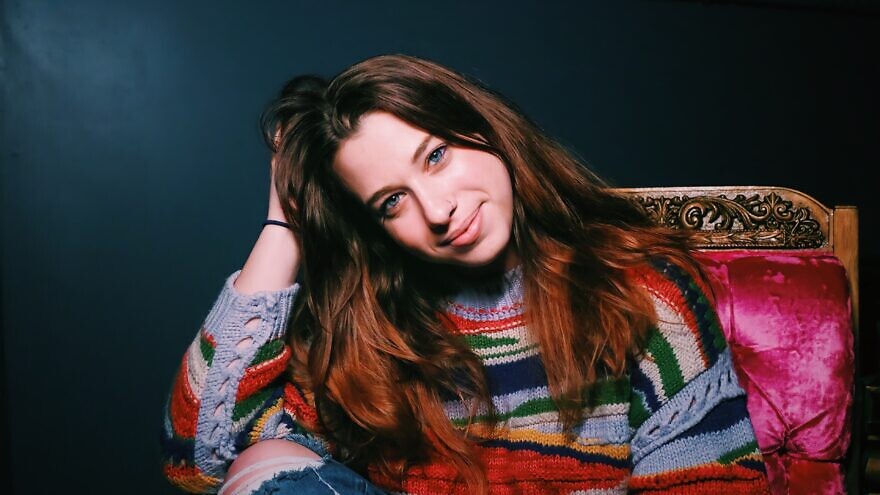 Comic Ariel Elias doesn't know if anti-Semitism played a role in getting a beverage thrown at her on stage. She is excited to make her late-night debut on "Jimmy Kimmel Live!" on Oct. 24. Credit: Jordan Ashleigh.
Republish this article
931 WORDS
Spread the word.
Help JNS grow!
Share now:

(October 20, 2022 / JNS) A Jewish comic has taken a nightmarish experience and turned it into what could be considered a dream come true.

During her set at Uncle Vinnie’s Comedy Club in Point Pleasant Beach, N.J., on Oct. 9, Ariel Elias asked if anyone had questions. In a video that has gone viral with 5.6 million views on Twitter, an audience member asks Elias if she voted for former President Donald Trump.

The comedian responds, “Why would you ask me that in here knowing that I’m the only Jew in this room? Are you trying to get me killed?”

The woman heckles Elias and says she could tell, from her jokes, that Elias voted for President Joe Biden. Elias counters, “I can tell by the fact that you’re still talking when nobody wants you to, that you voted for Trump.”

Thirty-three seconds later, a can of beer misses her face by a few feet to her right and crashes against the wall. Elias picks up the beer and chugs some of it, to loud applause.

“I think in general we’re all pretty on edge in this country and that’s sort of just spilling over into everything,” Elias told JNS.

She’d been talking about birth control earlier in the set, which she thinks may have caused the Trump supporter to believe Elias voted for Biden. She said while all comedians are cognizant of the Oscars incident in which Will Smith slapped Chris Rock, going on stage that night, she didn’t believe she was in danger. Elias felt she represented herself well.

She said that after the show, some audience members told her she was targeted because she was Jewish. But she said she can’t be sure of the heckler’s motivation, or that of her husband, who threw the beverage. She also said the couple was among a rowdy group of attendees who were there for a birthday party.

Elias was interviewed on CNN and ABC, among other channels, about the incident. Numerous celebrities praised Elias, including late-night host Jimmy Kimmel, who booked Elias to perform on his Oct. 24 show.

The Tulane University graduate, who grew up in Lexington, Ky., isn’t a germaphobe and believes there was nothing nefarious in the drink.

“The club is BYOB and I was pretty certain that the guy had thrown an unopened beer,” she said, adding that she only saw liquid fly out when it hit the wall.

When she headlined at New York Comedy Club in Manhattan on Sunday night, Elias told a crowd she was still processing what took place. She drew laughs during a number of moments, including when she described how people in the U.S. South would mispronounce her first name and when they asked if she was named after a Disney princess, she answered that it was instead the former Israeli prime minister. Apparently, some got her reference to the late Ariel Sharon.

One new fan she picked up after the beer incident was New Yorker Sheldon Dong, 24, who stood in line outside Fat Black Pussycat in Manhattan as she performed inside. He said he hoped to see her comedy in the future and was impressed by her quick thinking.

“It’s one of the craziest things I’ve ever seen,” Dong said of the viral video, which he viewed on TikTok. “The way she handled it was amazing.”

Elias said she’d always loved comedy and after she listened to podcasts that encouraged participation in open mic nights, she took the plunge.

“My first time was so much fun. I knew immediately, this was what I wanted to chase for the rest of my life,” she said.

Elias, 33, fuses observational humor with biting sarcasm. She often lets the crowd know she is Jewish. In Kentucky, she often answered questions about her religion.

“I grew up not around a lot of Jews,” Elias said. “In a lot of my friend groups, I was the only Jew, so I became sort of a representative where people ask questions about Judaism. Most of my friends were curious because they’d never had the opportunity to meet a Jew before. Because my community was small, we were tight-knit. So going to services was a time to relax and be amongst people you had a lot in common with.”

She said she was not surprised that some wondered if the beer incident was a publicity stunt.

“People in this country think mass shootings are fake, so why wouldn’t they think this is fake too?” Elias asked. “I don’t think it means we’re jaded. I think there’s a portion of our society that thinks everything is a conspiracy.”

(Elias was referring to “InfoWars” host Alex Jones profiting from telling the lie that the 2012 shooting at Sandy Hook Elementary School in Connecticut was a hoax.)

Elias, who married comedian Dan Shaki a year ago, will perform at Stand Up NY and Gotham Comedy Club on Oct. 26, two nights after her appearance on ABC‘s “Jimmy Kimmel Live!” The Jimmy Kimmel performance is something she’s yearned for ever since she started her career 11 years ago.

“Right now, I’m just excited,” she said. “I’m sure the day-of, I’ll be a little nervous. But I’m ready. I’ve been waiting to do standup on late-night TV for a long time.”