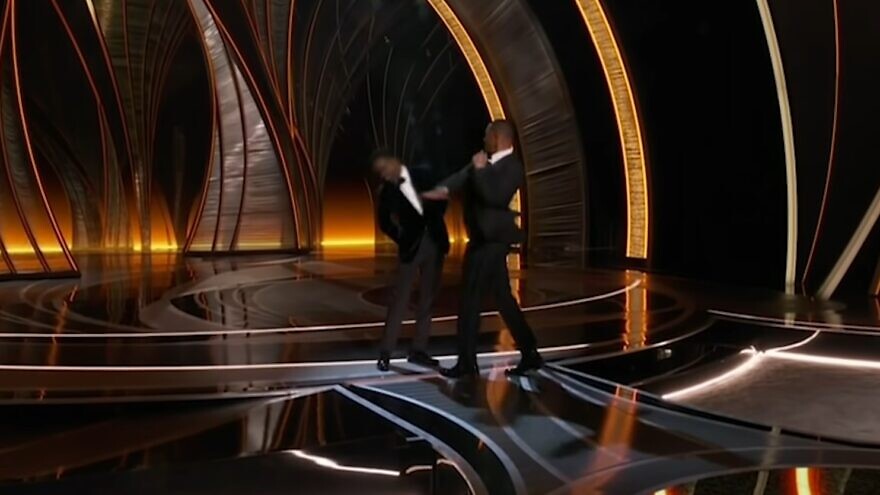 (March 28, 2022 / JNS) When Will Smith jumped up on stage at the Academy Awards on Sunday night to approach fellow comedian and actor Chris Rock, the host of the show, many in the audience assumed it was staged. After all, physicality is part of show business. Several Jewish comics interviewed, however, said it was very real and were stunned by Smith’s actions.

Shortly before he would receive the Best Actor award for his role as Richard Williams in the award-winning 2021 film “King Richard,” Rock made a joke about Smith’s wife, Jada Pinkett Smith, perhaps starring in “G.I. Jane 2.” (“G.I. Jane” featured a bald but beautiful U.S. Navy recruit played by actress Demi Moore.)

Pinkett Smith grapples with alopecia and showed up with no hair at the Oscar ceremony, and though initially both she and her husband gave a brief smile at the joke—however poor taste it may have been—he then rose, went up to Rock and slapped him hard in the face, afterwards cursing and saying to keep his wife’s f***ing name out of his mouth. (The sound was appropriately turned off for viewers.)

Smith later apologized to the other nominees for best actor and to the academy, but not to Rock.

“There is never an excuse to hit a comedian for their words,” said Modi Rosenfeld, who goes by the moniker of “Modi” and is scheduled to perform at the Stand UP NY comedy club on March 31.

“I was shocked to see it,” he acknowledged. “You could see it was real. I was more impressed by Chris Rock for being a man to take a hit and continue with the Oscars than I was with Smith for hitting him. It was definitely not staged. You could see the heat and the anger when Smith was shouting and cursing. I don’t think it will have much of an impact on crowds. They know they should enjoy the show.”

Comedian Eitan Levine also felt it wasn’t staged and didn’t believe that it was an attack on comedy.

“What is insane is that then they just let him accept the trophy,” he said. “It was disrespectful and not handled correctly.” 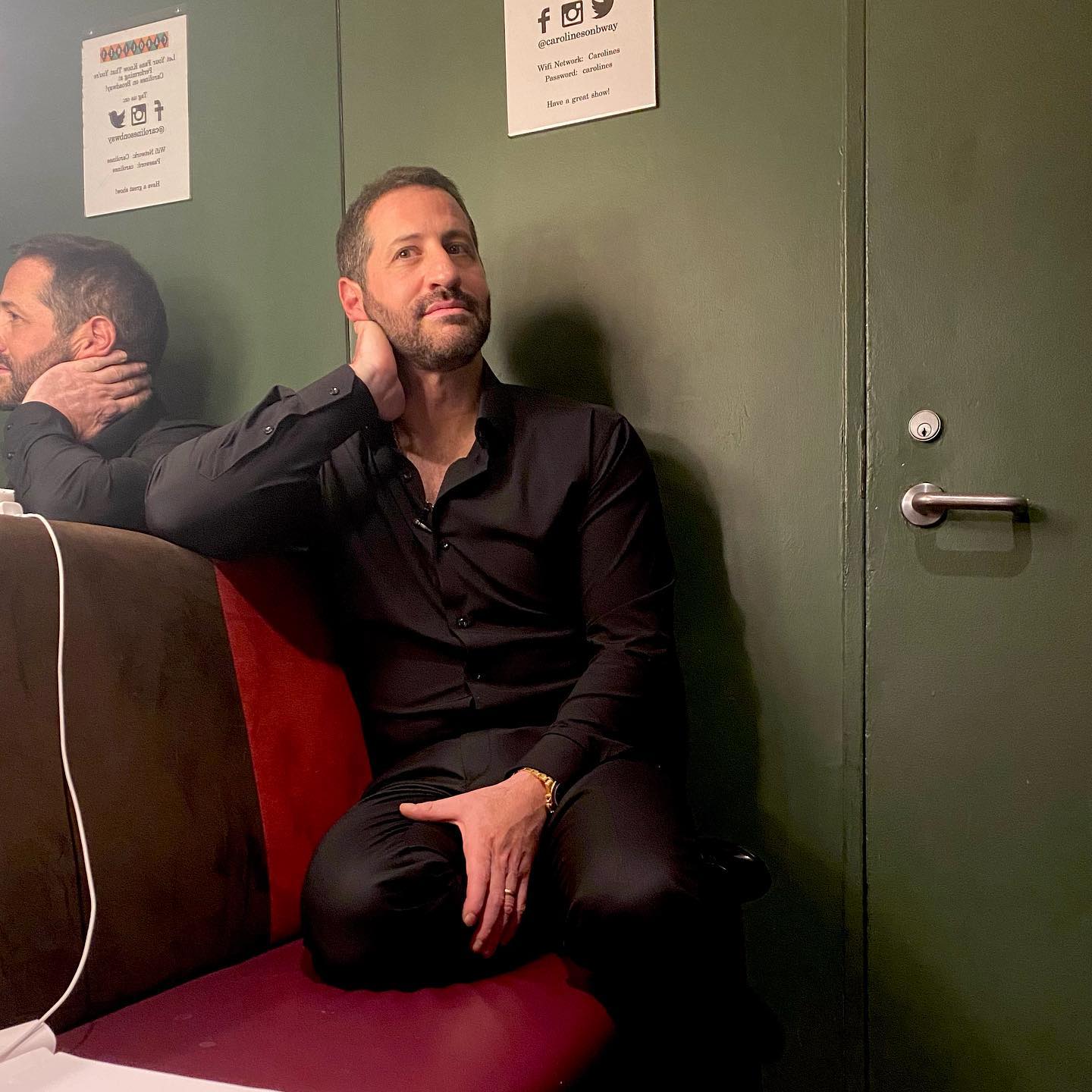 Modi Rosenfeld, who goes by the moniker of “Modi,” in a dressing room before a show at Carolines on Broadway. Credit: Courtesy.

He said from now on, he might be a little nervous if he sees someone in the audience or a crowd edging towards him, though he doesn’t expect more violence against comedians per se. He also noted that when Smith gave his acceptance speech, he almost seemed to be playing the character of Richard Williams.

Comedian Dave Weinbach, a past winner of The Jewish Week’s “Funniest Comic Contest,” disagrees, saying clearly a line was crossed with the slap heard around the entertainment world.

“There are people that heckle comedians,” he said, but that’s just language. “Should comedians slap people in the audience? Real ‘slapstick’ comedy? That wouldn’t make any sense or be tolerated.”

He said he was impressed that Rock could continue and even make a joke after being hit—and that it was one of the best nights in television. In fact, Weinbach offered a joke of his own, saying that tennis star Serena Williams quipped that “it was a great forehand.”

‘The whole thing could have been avoided’

Talia Reese said she is siding with her fellow comedian.

“The joke may have been in poor taste if Chris knew about Jada’s condition, but the assault and subsequent f-bombs were wrong. Also, do Jewish husbands defend their wives’ honor? Only when I yell at him to do it!”

Chani Lisbon, a comic who has suffered from alopecia herself, said she didn’t think Rock’s joke was funny at all.

Still, she said, “I don’t think [Smith] had an excuse to punch him. There’s always a way to communicate without getting violent. I would be embarrassed if I was him. The whole thing could have been avoided.” 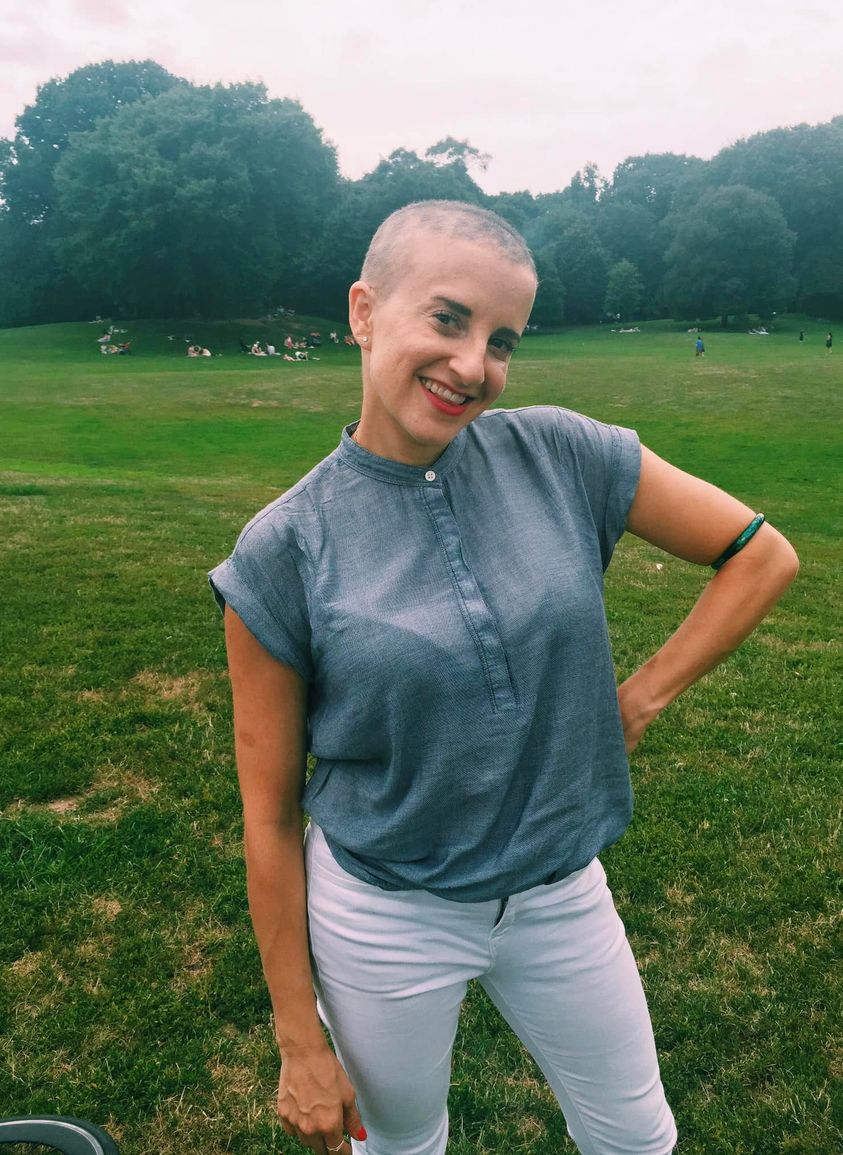 Comedian Chani Lisbon shows her hair loss due to alopecia; it has since grown back. She said that Chris Rock’s joke wasn’t funny; still, Will Smith shouldn’t have slapped him. Credit: Courtesy.

Comedian Eli Lebowicz said the fact that he got applauded later was odd.

Todd Stone, who does comedy along with his twin brother, Adam, said he believed that ill feelings were brewing earlier when Pinkett Smith talked about boycotting the Oscars, and Rock said she wasn’t invited and also mocked Smith’s 1999 film “Wild Wild West.”

Would he slap someone who insulted his brother?

“Anyone who insults my brother is insulting me,” he said. “Now, I’m a bit of a wimp, so it depends on who makes the insult. I might not slap someone who could hurt me or my brother as a result.”

On his radio show, Howard Stern said Smith would probably not have slapped Jason Momoa or Dwayne Johnson (“The Rock”) had they made the same joke.

‘He’s a mensch that he didn’t press charges’

Arye Dworken, who has been a comedian and comic writer, said the issue was clear.

“If someone makes a joke at my expense or my wife’s, under any circumstance, violence is never an appropriate response,” he wrote online. “Whether the joke itself was necessary—if not wholly unfunny—is debatable, but the reaction was unequivocally not. … Will Smith acted in a moment of lapsed judgment and moral turpitude, and it saddens me that half the Internet can’t see that.”

Dani Zoldan, co-owner of Stand Up NY, said if Smith wanted to take a stand against Rock, the better move would have been to get up and leave the event. 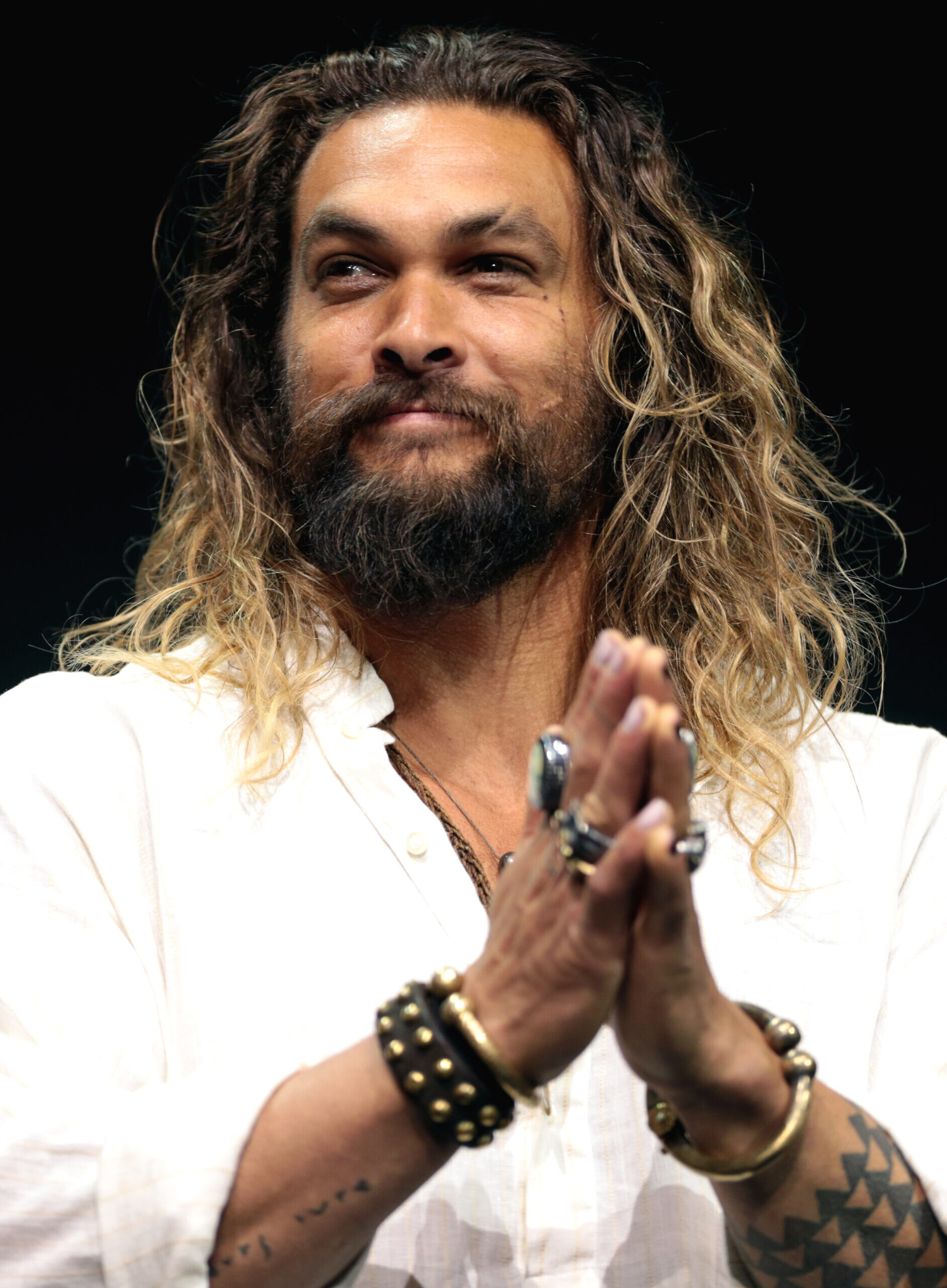 Would Will Smith had gone after actor Jason Momoa? Mamoa at the 2017 San Diego Comic-Con International in California. Credit: Gage Skidmore via Wikimedia Commons.

“You don’t go after a comedian for telling a joke,” he said. “It hurts comedy when comics feel that they have to take fewer risks because of the fear of getting canceled. If that would have happened at a comedy club, the cops would have been called, and the individual would have been arrested. But in Hollywood, you get an award.”

Kenny Gluck, who runs comedy shows in the tristate area including Kosher Komedy, said he isn’t even sure if Rock knew that Pinkett Smith had alopecia. He added that there’s no way that smack was staged.

“If it was, Smith deserves two Oscars,” he said. “Chris Rock took the high road; he’s a mensch that he didn’t press charges.”

Gluck said the incident was a bad example, especially for young viewers, showing that celebrities can get away with violence with no penalty. He said that perhaps the Oscars should have warned Smith that he would be banned if he committed another act of violence.

“The whole comedy world is concerned,” said Gluck. “This has implications that people can be inspired to harm comedians. You’d think Smith would have had more decorum.”

Smith has said in the past he suffered from Attention Deficit Hyperactive Disorder (ADHD), which leads to people having difficulty controlling their impulses. Nava Silton, a professor of psychology at Manhattan Marymount College, said that nevertheless, this is a case where adults have to be responsible for their actions.

“ADHD affects impulse control but should not be used as an excuse, and Will Smith has to know what he is doing at such a large and public event,” said Silton, noting that the actor has been insulted by Rock at the Oscars before and has shown decorum.

“I was disappointed,” she said, “to see this behavior because it is poor modeling.”