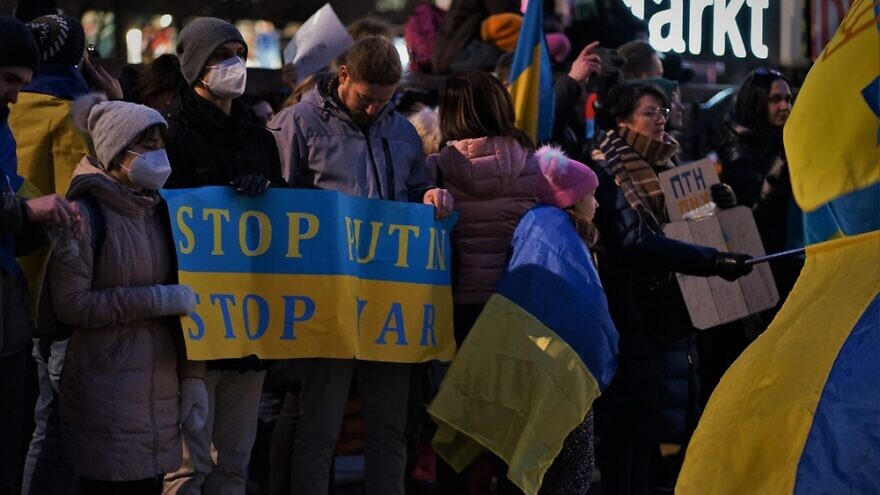 (February 24, 2022 / JNS) Jewish organizations from across the spectrum are condemning Wednesday’s military invasion of Ukraine by Russia.

The Republican Jewish Coalition called for the Biden administration to accelerate the implementation of “punishing sanctions” on Russia and its leaders and for Congress to pass legislation to broaden the sanctions authority.

“Vladimir Putin aims to destroy the nascent democracy in Ukraine, to threaten the former Soviet republics in eastern Europe, and to weaken the NATO alliance,” RJC said in a news release on Thursday. “The free world must stand up to this violent expansion now, and the U.S. must lead the effort from a position of strength and in solidarity with our allies.”

“Jewish Dems strongly support another round of punitive sanctions implemented by the Biden administration against Russia, including cutting off Russia from the U.S. financial system. Vladimir Putin must face harsh and painful consequences for his belligerent and violent actions,” the group said.

Addressing the nation on Thursday, U.S. President Joe Biden said that Russian President Vladimir Putin “chose this war” and laid out a set of measures that will “impose severe cost on the Russian economy, both immediately and over time.”

The women’s Zionist organization expressed concern for the hundreds of thousands of Ukrainian Jews and other Ukrainians, facing the most lethal military action in Europe since World War II.

“We stand with them in full solidarity and pray for their safety,” Smolow and Adler said in a news release. “Too many civilians have already been killed. Many are fleeing for safety in neighboring countries, and some have found refuge farther afield—in Israel. We applaud the government of Israel, the American Jewish Joint Distribution Committee (JDC), Jewish Agency for Israel and other nongovernmental organizations risking their lives to provide support for Jews still in Ukraine and working to bring new Ukrainian olim to Israel. As Jews, we believe that whoever saves one life saves the entire world, and we are grateful for the bravery of those working to do so on the ground today.”

Similarly, The American Jewish Committee condemned the “flagrant violation of international law” by Russia and that the organization stands “in solidarity with the Ukrainian people and remain committed to supporting Ukraine’s sovereignty and territorial integrity.”

However, not all international Jewish groups have weighed in on the conflict so far. The World Jewish Congress and its president Ronald Lauder has yet to issue a statement on the invasion or condemnation of Russia’s actions.

‘Putin’s justification to invade is totally without merit’

The National Coalition Supporting Eurasian Jewry (NCSEJ) wrote in a news release that the invasion violated the territorial integrity of Ukraine and that it stands in solidarity with the Ukrainian people.

The organization also took issue with Russian President Vladimir Putin statements that Russia was going to “de-Nazify” the Ukrainian government.

“Putin’s justification to invade is totally without merit and his assertion that Ukraine is a fascist or Nazi state has no basis,” NCSEJ said. “The Ukrainian Jewish community is fully integrated and enjoys all the rights and privileges as any other Ukrainian citizen.”

“NCSEJ is deeply concerned about the onslaught of an unprecedented humanitarian crisis in Ukraine,” NCSEJ’s statement continued. “All appropriate steps must be taken to ensure the safety and well-being of Ukrainians.”

In a joint news release, B’nai B’rith’s President Seth J. Riklin and CEO Daniel S. Mariaschin welcomed the show of global unity and solidarity in the Western world’s condemnation of Russia’s actions and said it was concerned by the prospect of a humanitarian crisis.

B’nai B’rith Europe is involved in an effort to assist the Jewish communities in Ukraine and collect funds to allow for the purchase of medicines and provide financial aid to the community. B’nai B’rith in Italy has launched its own relief campaign and the release stated the B’nai B’rith Disaster and Emergency Relief Fund is open to accept donations.