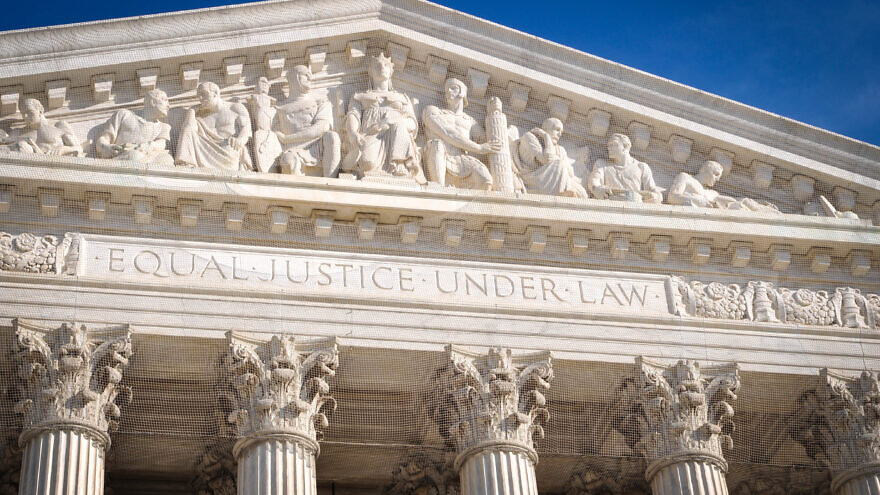 (May 4, 2022 / JNS) The unprecedented leak of an initial draft majority opinion by the Supreme Court in the challenge of Dobbs v. Jackson Women’s Health Organization—Mississippi’s law banning abortion after 15 weeks of pregnancy—has caused a firestorm of opinions on both sides of the abortion debate, no less so among Jewish organizations that for the most part oppose the court’s likely decision, which was due to be officially announced in June.

First published on Monday night by Politico, the leak contained parts of a draft majority opinion in Dobbs v. Jackson Women’s Health Organization by Justice Samuel Alito that was being circulated in the court.

Alito said that the 1973 Roe v. Wade decision, which guaranteed federal protection of abortion rights, was “egregiously wrong from the start,” as well as a 1992 decision in Planned Parenthood v. Casey that affirmed that right.

“We hold that Roe and Casey must be overruled,” Alito wrote in the draft. “It is time to heed the Constitution and return the issue of abortion to the people’s elected representatives.”

On Tuesday, Chief Justice John Roberts confirmed the authenticity of the leaked document and said that federal marshals had been called to investigate how it happened.

As soon as the news was published, crowds on both sides of the abortion issue gathered in front of the Supreme Court to either protest or support the potential decision.

“The draft majority Supreme Court opinion … is an attack on women’s autonomy, freedom and health. When a woman’s right to choose is limited, we also limit her right to safe, informed medical decisions and procedures,” said Rhoda Smolow, president of Hadassah the Women’s Zionist Organization of America, and CEO Naomi Adler in a joint statement. “If enacted, this decision will have disproportionate impacts for the empowerment, economic equity and security of women in underserved communities.”

The Rabbinical Assembly (RA), which represents the Conservative movement in the United States, said it fiercely opposes the attempt to end the precedent that had been in place for more than 50 years, calling the Supreme Court’s likely decision an attack on abortion accessibility.

“The RA is deeply troubled by reports that the Supreme Court will soon nullify the constitutional right to abortion. Reproductive freedom is again under assault, this time from the highest court in our nation,” it wrote in a news release. “The RA supports full access for all those who need abortions to the entire spectrum of reproductive health care and opposes all efforts by governmental, private entities or individuals to limit or dismantle such access.”

The RA argued that while Jewish law cherishes the sanctity of life or potential life during pregnancy, it does not believe that personhood and human rights begin with conception, but rather with birth, which it wrote is indicated by Exodus 21:22-23. The Committee on Jewish Law and Standards of the Rabbinical Assembly has previously affirmed the right of a person to choose abortion in cases where “continuation of a pregnancy might cause severe physical or psychological harm, or where the fetus is judged by competent medical opinion as severely defective.”

“Denying individuals access to the complete spectrum of reproductive health care, including contraception, abortion-inducing devices and abortions, among others, on religious grounds deprives those who need medical care of their constitutional right to religious freedom,” wrote the RA.

It also noted that it opposes the “heartbeat bills” that have been proposed in some states, which make abortions illegal as soon as a fetal heartbeat is detected. It called on its members to contact their members of Congress to demand abortion rights in every state. 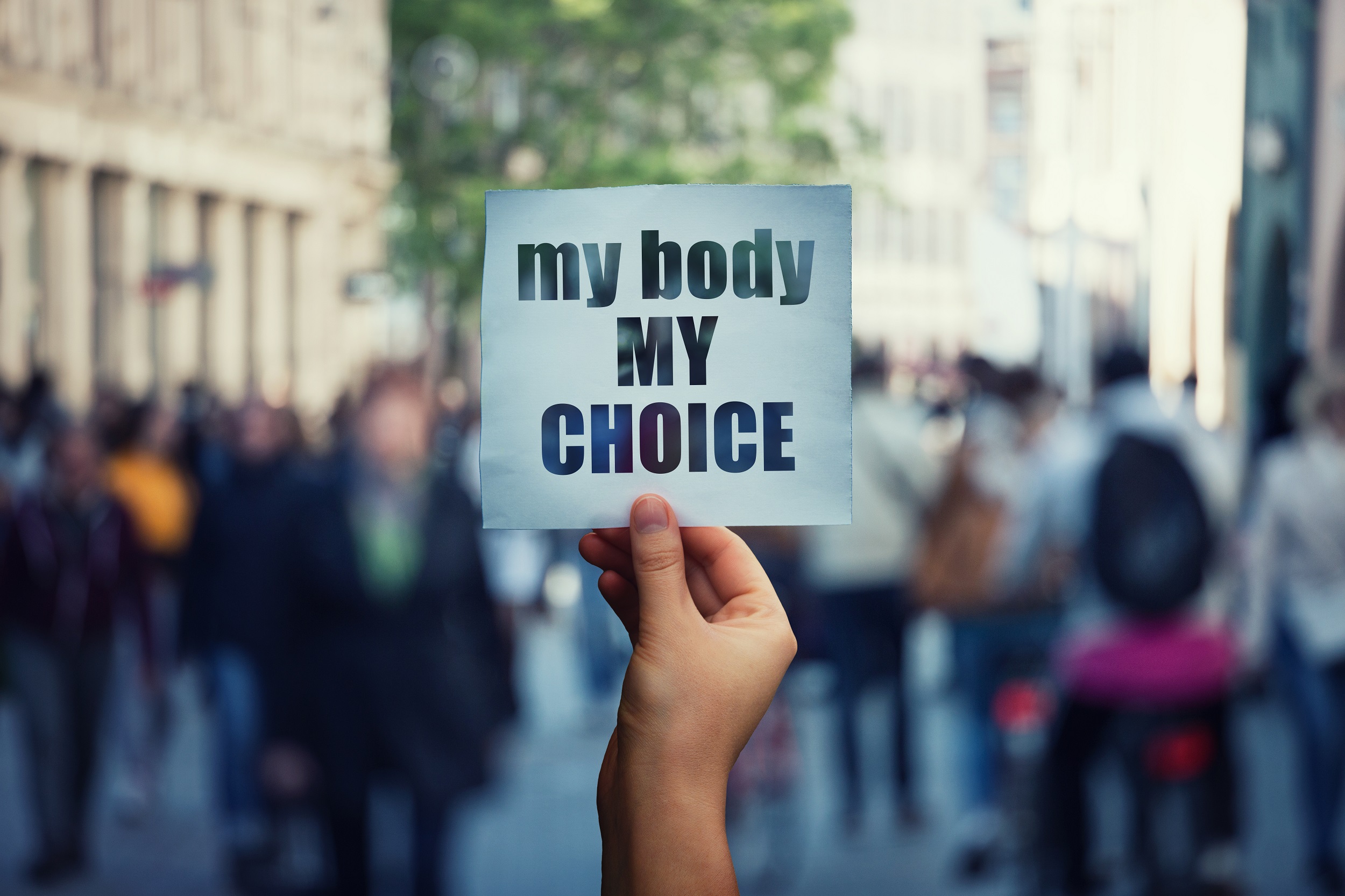 ‘This decision would have disastrous consequences’

Rabbi Jonah Pesner, director of the Religious Action Center, an organization affiliated with the Reform movement, said that the draft ruling would roll back fundamental rights and human dignity throughout the United States, allowing more abortion restrictions like the law in Mississippi to proliferate. He called these laws rooted in “anti-black racism, white supremacy and other systems of oppression.”

“This decision would not only decimate abortion access but also explicitly threaten other fundamental rights we hold dear, including the LGBTQ+ rights affirmed by Lawrence v. Texas and Obergefell v. Hodges,” Pesner wrote in a release. “It is clear we must continue to pursue actions outside the courts to protect each person’s fundamental rights to provide and receive abortion care, to marry whom we love, and to have full bodily autonomy through laws and federal protections, including the Women’s Health Protection Act, the EACH ACT and the Equality Act.”

Rabbi Marla Feldman, executive director of Women of Reform Judaism, said the draft opinion was an affront to women’s fundamental right to make decisions for their own bodies.

“If agreed to by a majority of justices, this decision would have disastrous consequences, leaving tens of millions of people across the country without abortion care,” she wrote in a release. “People will be forced to travel across state lines to seek the care they need, and many who cannot—due to a lack of adequate financial resources, time off from work or child care, for example—will be forced to carry their pregnancies against their will, putting their mental and physical health at risk.”

Feldman wrote that she believes that striking down the federal guarantee to abortion will have a disproportionate impact on populations already facing discrimination and obstacles to health care, including people of color, indigenous people, people with disabilities, undocumented individuals, and rural and low-income people.

“We are proud that Jewish tradition regards abortion as essential health care—not only permitting the termination of pregnancy but even requiring it when the life of the pregnant person is in danger. Restricting access to reproductive health care impedes the freedom of religion granted by the First Amendment, including a Jewish person’s ability to make decisions in accordance with their religious beliefs,” she said in a statement. “As people lose access to abortion across the country, and our fundamental rights and moral agency are targeted, we will continue to provide support to our communities and broader U.S. community, and continue the fight for all people to determine their own futures and lives.” 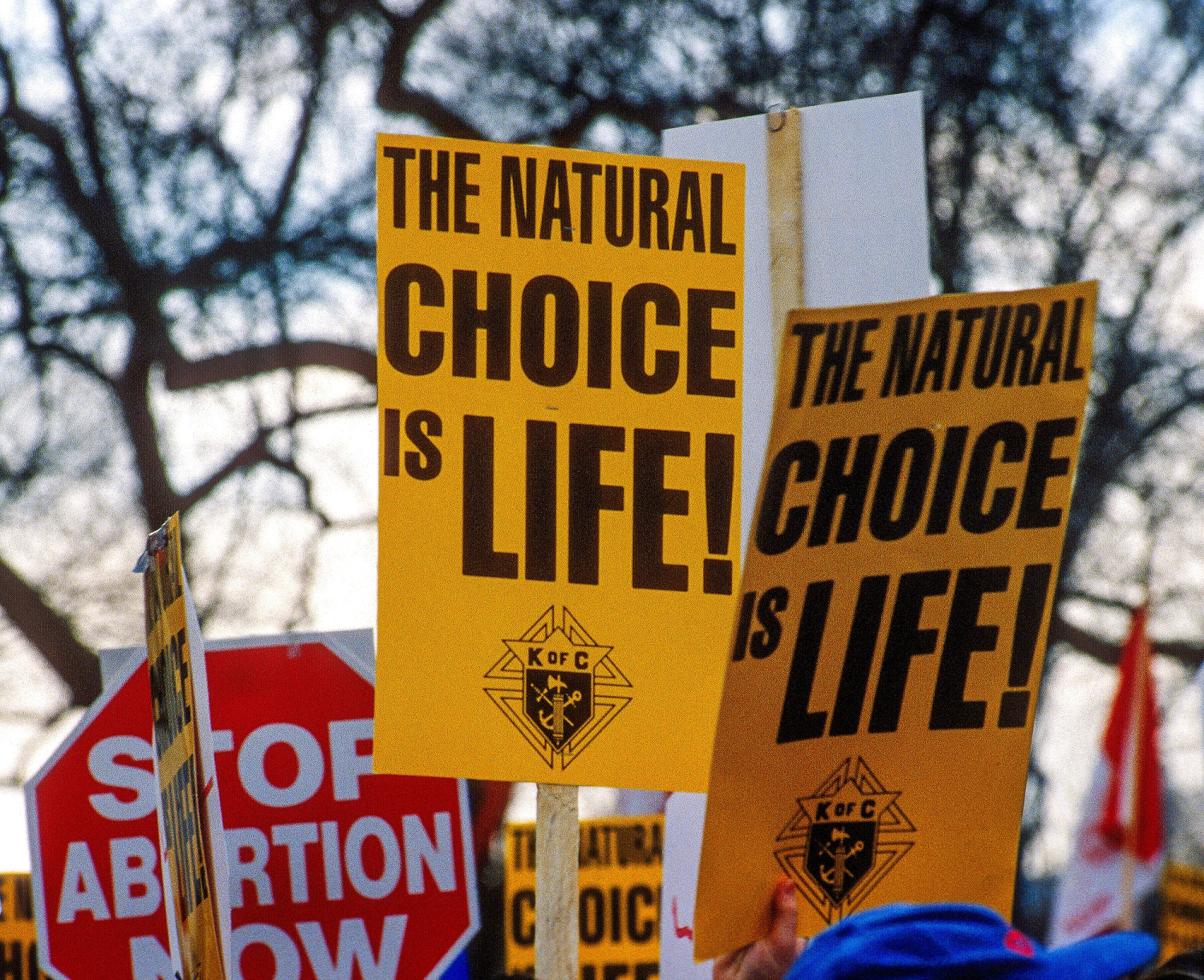 An annual “Right to Life March” passes by the front of the U.S. Supreme Court in Washington DC. Credit: Mark Reinstein/Shutterstock.

One concern among the Jewish organizations was that the decision would allow states to pass laws that enshrine the less nuanced opinion on abortion found in Christianity, which believes that life and rights for the fetus begin at conception, and whose adherents are often opposed to abortions even when the pregnancy is the result of rape or incest.

One Jewish organization, the Coalition for Jewish Values (CJV), disagrees with other organizations that claim restrictions on abortion represent a specific Christian belief that would interfere with Jewish practice.

CJV, which represents more than 2,000 traditional, Orthodox rabbis in America, said in a release that the Torah identifies human life as “a soul placed (breathed) within a body by G-d Himself, with inestimable sanctity and value.”

“We support heartbeat laws and other efforts to distinguish between tragic cases of abortion due to medical necessity, as compared to disregard for fetal life as simply the mother’s ‘choice,’ ” it stated.

CJV pointed out that if the leaked opinion remained the court’s decision, it would not be a ban on abortion as opponents claim, but rather a return of the decision back to the hands of the “democratic governments of the individual states” as a policy issue.

“We hope that more states will be able to enact reasonable restrictions and restore America to a posture of valuing all human life,” wrote CJV.

Agudath Israel of America, which serves as an umbrella group representing Orthodox Judaism, said in an email that it was not yet going to weigh in as the leak was merely a draft and may not represent the court’s final ruling or language.

Instead, Rabbi Abba Cohen, Agudath’s vice president of government affairs, said the organization was closely monitoring the situation, noting that the Jewish perspective on abortion is nuanced.

“We would have to review the precise nuances of the final decision itself. How, for example, it treats abortion rights when the mother’s life or health is endangered or when the mother’s sincerely held religious beliefs allow or require her to seek an abortion,” wrote Cohen. “We would also have to carefully examine state statutes and prospective legislation on these matters. Only then can we responsibly determine the true impact of the Dobbs decision and future steps we might deem necessary.”

‘A woman’s right to decide for herself’

Organizations not affiliated with religious movements, such as the American Jewish Congress and the Democratic Majority for Israel (DMFI) also responded.

American Jewish Congress called on elected officials at the state and federal levels to protect “a woman’s right to decide for herself.”

“While our organization has and always will advocate for the independence of the court, we cannot sit by as fundamental rights such as safe access to abortion and a woman’s right to choose come under fire,” it said, urging the court not to disregard precedent set by the previous Supreme Court decisions.

DMFI president and CEO Mark Mellman called Alito’s opinion a “radical draft decision” that was morally wrong and legally indefensible, and urged for the election of pro-choice lawmakers to put abortion protections into law.

“A woman’s right to choose an abortion has been, in Justice [Neil] Gorsuch’s words, ‘the law of the land’ for nearly 50 years,” Mellman said in a statement. “Violating commitments they made to the U.S. Senate, Justices Gorsuch and [Brett] Kavanaugh, among others, are poised to strip from women, their doctors and families the right to make personal medical decisions and hand that right to politicians instead.”

Politicians, he said, “are the last people who should be making such decisions.”