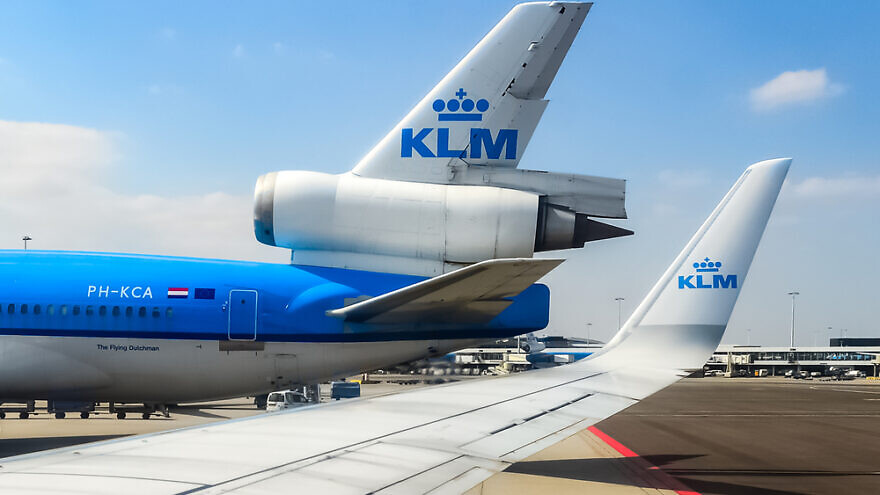 (March 30, 2022 / JNS) A group of Orthodox Jewish girls from New York has filed a complaint against Delta Air Lines and KLM Royal Dutch Airlines for the discrimination they say they faced on flights last summer, reported Insider.

The 19 plaintiffs were part of a 54-person tour group of Jewish teenagers and their chaperones who were returning from a visit to historical sites in Europe, including Auschwitz, when the issues occurred with the airlines.

The Jewish teens said during their first KLM return flight from Kyiv to Amsterdam on Aug. 6, flight attendants disciplined them for removing their masks to eat homemade kosher food outside of the plane’s designated mealtimes. Other passengers who ate food at the same time were not disciplined, according to the complaint filed on Tuesday.

The Jewish teens were given a “final warning” for not complying with COVID-19 protocols regarding their masks and were threatened with arrest, said the complaint. They believe KLM staff targeted them with warnings “solely for the purpose of unlawfully harassing plaintiffs because of their Jewish race, ethnicity and/or religion.”

KLM apparently then didn’t allow the girls to board their next flight from Amsterdam to New York, according to the complaint cited by Insider. The banned passengers included two tour group members who had not traveled with the girls on their trip from Kyiv to Amsterdam. The group spent the night sleeping at Amsterdam’s Schiphol Airport.

“By barring plaintiffs from traveling without any regard to their individual conduct, defendants sought to target and penalize the group of Jewish passengers as a whole by barring 19 of its members from traveling,” said the complaint.

The following morning, the plaintiffs boarded a Delta flight to New York but were ordered off the plane for “misbehaving” after one girl switched seats with a woman who asked the teenager to do so.

The plaintiffs said Delta treated the group “differently and worse than non-Jewish passengers,” who reportedly also moved seats and were not reprimanded. They also alleged that a KLM security official repeatedly tormented the tour group after they deplaned.

The group was offered a flight later that day but declined because it would have involved traveling on Shabbat. They instead spent the night in Antwerp, Belgium, and traveled home to New York with United Airlines the following day, according to Insider.

They are asking for compensatory and punitive damage, and for Delta and KLM to be prohibited from “discriminating on the basis of race, ethnicity and religion, and in particular, discriminating against Jewish persons.”

The plaintiffs claimed that the treatment they experienced on their flights with Delta and KLM was “a devastating reminder … that anti-Semitism and discrimination against the Jewish race continue in 2021.”