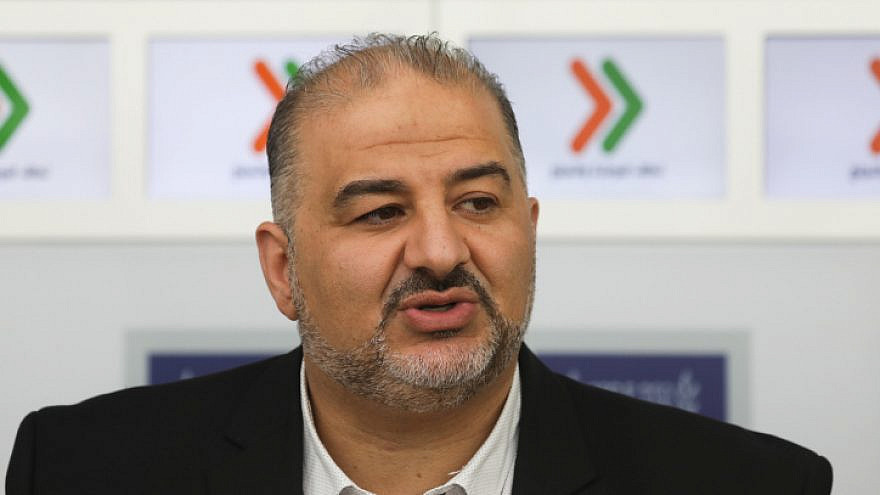 Mansour Abbas of the Ra'am-Balad Party holds a press conference after a meeting with Israeli President Reuven Rivlin at the President's Residence in Jerusalem on April 16, 2019. Photo by Noam Revkin Fenton/Flash90.
Spread the word.
Help JNS grow!
Share now:

(December 3, 2020 / Israel Hayom) Members of the Joint Arab List are up in arms after Ra’am Party head Mansour Abbas, along with three of his fellow party members, skipped a vote to disperse the Knesset on Wednesday.

Faction officials went so far as to accuse Abbas of coordinating the move with Israeli Prime Minister Benjamin Netanyahu in advance, with one specifically alluding to a meeting the Ra’am Party held with senior officials from the Prime Minister’s Office over several hours last Thursday.

Abbas confirmed to Israel Hayom that he had met with officials on Thursday, but insisted that it “had nothing whatsoever to do with the vote to disperse the Knesset.”

The meeting was aimed at “promoting the government plan to benefit the Arab sector. This is a plan that is spread out across five years and costs some 500 million shekels (about $150 million) a year. That is what matters right now to the Arab public, not petty politics,” he said.

While Abbas said he was not brushing off criticism from within the faction, he emphasized that “the reason we established the Joint Arab List was to worry about the Arab sector and not to please the Zionist left. The Arab public supports me, and it’s a fact that there are no complaints about me from the public. The allegations are only from Arab politicians, not the voters, and I serve the Arab public that voted for me, no one else. Not Gantz, not Netanyahu, not [Yamina Party head Naftali] Bennett and not [Yesh Atid Party head Yair] Lapid.”

He added: “I respect my fellow party members’ decision to support the legislation to disperse the Knesset, but with all due respect, I do not have to obey it [the list].”

In a statement, Joint Arab List head Ayman Odeh said “just as we promised the public, we are continuing to fight for equal rights and mark achievements—without groveling and while defending our ideology and our values.”

Odeh said he was pleased with “the significant progress” being made with Justice Minister Avi Nissenkorn on reforms he said would be published in full” on the more painful issues in Arab society—the many years of discrimination in the field of planning and construction and the authorities’ closing their eyes to the waves of crime and violence.”

“The Joint Arab List will continue to work for the public that sent it to represent it with honor,” he said.