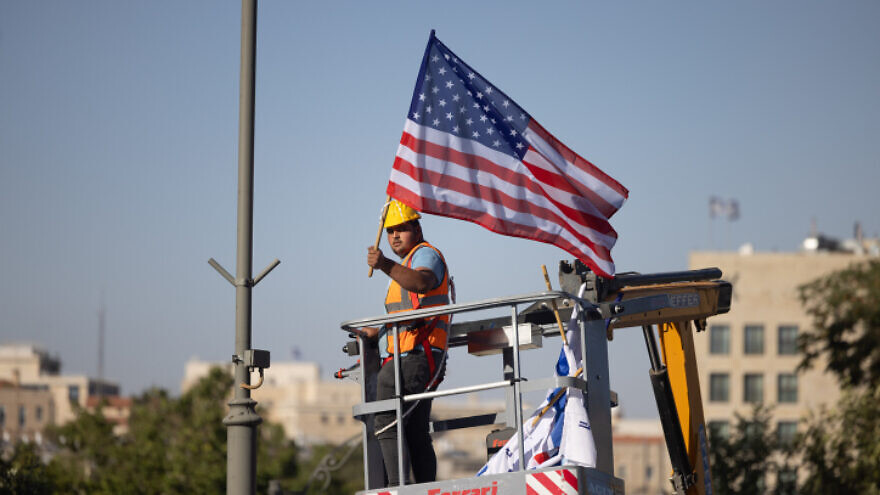 (July 12, 2022 / JNS) Ahead of this week’s visit by U.S. President Joe Biden, the Israeli government has taken steps to pacify Washington by refraining from unilateral moves in Judea and Samaria.

As reported by JNS, a scheduled July 18 discussion by the Civil Administration’s higher planning council towards the approval of the construction of nearly 3,500 units in the E1 corridor was postponed until September.

No one knows for sure what Biden has up his sleeve in terms of restarting peace talks, but there is concern in Israel that he may demand concessions from Israel during his visit.

Nadia Matar, co-chair of the Sovereignty Movement along with Yehudit Katsover, called upon Israel’s leadership not to give in to any demands or make concessions that will harm the state.

“It is worrisome that simultaneously we have a weak Israeli leadership in transition, together with a progressive American administration. Nevertheless, we must stand strong,” said Matar.

The key, she said, was sovereignty.

Israel’s upcoming elections are an opportunity “to once and for all demand sovereignty [in Judea and Samaria]. The only reason the Land of Israel is put on the negotiating table is because there is no sovereignty,” she stated.

What really matters is what policy Israel’s leaders choose, she concluded, quoting Israel’s first prime minister, David Ben-Gurion, who said: “What matters is not what the Gentiles will say, but what the Jews will do.”

In line with this, the Sovereignty Movement, along with Regavim, Ad Kan, Israel’s Defense and Security Forum (Habithonistim), Im Tirzu and the Zionist Organization of America have launched a campaign calling on Israeli Prime Minister Lapid not to make concessions during Biden’s visit.

As part of the campaign, this past Friday Matar and Katsover, along with Meir Deutsch, director of Regavim, published an open letter (advertisement) to Lapid in Haaretz’s Hebrew and English editions, saying: “During the visit, it is anticipated that the American president will try to exert pressures to advance his vision of dividing Israel and establishing a Palestinian state in its heart. However, you have the obligation to block moves of this kind, which encourage terror, endanger the future of the state [and] undermine stability in the Middle East, which is why the overwhelming majority of the people in Israel oppose them.”

The planned visit, the letter continues, “provides an indication of the direction the visit will take: to exert pressure on Israel’s decision-makers, most especially you, Mr. Prime Minister, to make painful concessions that will endanger Israel’s future.”

Efrat Mayor Oded Revivi told JNS that he met with State Department officials in Washington just a few weeks ago before Prime Minister Naftali Bennett’s government fell. He had commented to his hosts, he said, that it was surprising that Biden was going through with the planned visit despite the uncertainty over who the Israeli prime minister receiving him would be.

“The answer I was given,” said Revivi, is that “the relationship between the two countries is so strong that it doesn’t really matter who the prime minister is, it’s all about people to people.”

However, now that Bennett’s government has fallen and Biden will be meeting with caretaker Prime Minister Lapid, “it’s definitely questionable what he can achieve through this visit,” he added.

“I hope he [Biden] will realize that the reality has changed since the last time he was here—namely that peace can grow from the bottom up, and not necessarily from top-down agreements,” he said.

“I hope the president won’t try to impose plans which the Israeli government won’t necessarily have the ability to carry out afterwards,” he concluded.

Binyamin Regional Council chairman Israel Ganz told JNS that “Judea and Samaria, as a part of the State of Israel, warmly welcomes every U.S. president who comes to visit. This is part of a sacred bond between the Jewish people and American people, and between Israel and the United States.”

Ganz added however that “with Judea and Samaria at the heart of the debate between us, it’s only fitting that the president should come and talk to us and not about us. This isn’t an issue of having the proper etiquette, this is something I would expect from those who want to make a real difference and find a solution.”

Should Biden visit, he said, “I would show him our projects towards enhancing the quality of life for all peoples in my region. He can help make a difference.”

“Instead of pomp and circumstance,” said Ganz, “The president and I can encourage and improve the shared roads we have with our neighbors, provide medical services, and safeguard the environment.”

At the same time, Gedaliah Blum, who lives in Eli and is the founder of a number of economic initiatives which strengthen Judea, Samaria and the Jordan Valley, downplayed the Biden visit.

“This is really a diplomatic photo-op,” he told JNS. “Biden is essentially a lame-duck president, whose own party is looking to replace him in the next U.S. election, while Lapid is just keeping the prime minister’s chair warm until Israel’s [November 1] election.”

He added, however, that “Lapid is going to play this up as much as possible, because this could be a legacy moment for him.”

Blum isn’t concerned about talk between the leaders surrounding a potential Palestinian state.

“The Jews in Judea and Samaria are a reality in this area—we are growing, thriving and living, and building businesses, and so I have absolutely no concern over anything Biden might bring to the table,” he said.