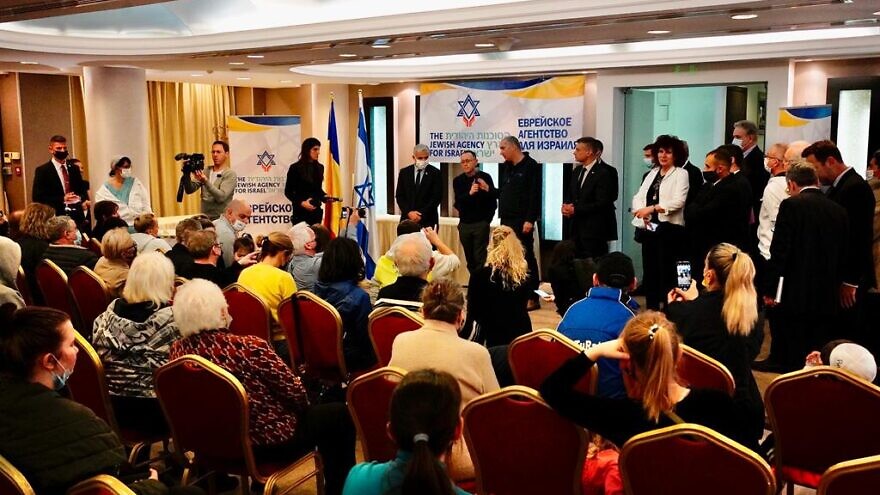 (March 13, 2022 / JNS) Israeli Foreign Minister Yair Lapid met on Sunday in Bucharest with Jewish Ukrainian refugees preparing to immigrate to Israel, according to a statement from the Jewish Agency for Israel.

The refugees, who are currently at the Jewish Agency immigration processing center in Bucharest, are immigrating under an expedited process recently approved by the Israeli government, according to the Agency.

At the center, Lapid was briefed by J.A. Chief Operating Officer Yehuda Setton on the Agency’s efforts in Romania and other countries along the Ukrainian border to help the thousands of Jewish refugees from Ukraine. The foreign minister also spoke with the refugees themselves.

The immigration center in Bucharest is one of many facilities established by the Agency and the International Fellowship of Christians and Jews (IFCJ) immediately after the war broke out last month in Ukraine. “The centers provide humanitarian aid and assist the influx of Jewish Ukrainian refugees escaping the country and hoping to immigrate to Israel,” according to the Jewish Agency.

There are four immigration processing centers in Bucharest, that currently house some 1,000 Jewish refugees from Ukraine. The Jewish Agency and IFCJ have taken in a total of 6,000 refugees at centers in Poland, Moldova and Hungary, according to the statement.