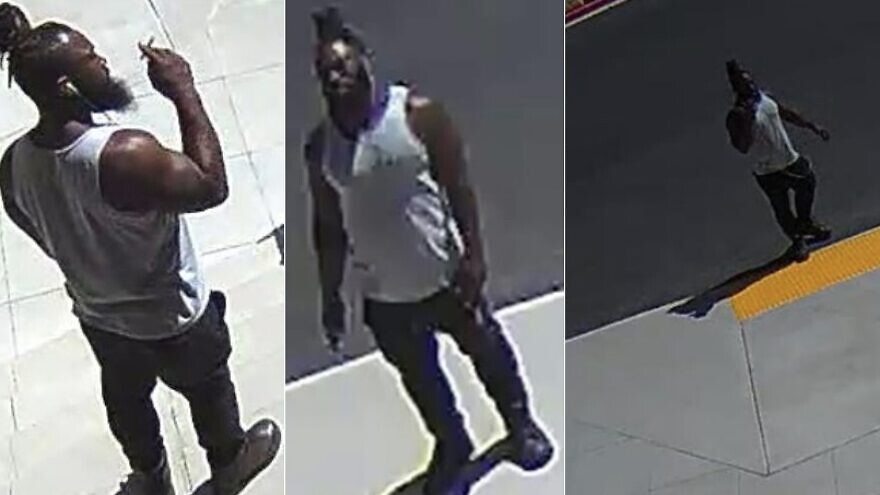 (June 7, 2022 / JNS) Las Vegas Police are searching for a man who entered a synagogue on June 4, on Shabbat and during the Jewish holiday of Shavuot, and threatened congregants.

According to Las Vegas Metropolitan Police bulletin, “On June 4, 2022, at approximately 10:20 a.m., patrol officers responded to a synagogue located in the 9000 block of Hillpointe Road for a report of a suspicious person. Upon arriving, security advised officers that an unidentified male entered and caused a disturbance and made threatening comments.”

“The subject is described as a black male adult, 5’9,” muscular build, with dreadlocks in a bun,” the report continued. “He has multiple tattoos on the face, including the temple area. He was last seen wearing a gray tank top, black jeans and brown boots.”

While the release from the police department did not identify the synagogue, Temple Sinai Las Vegas did address the incident on its Facebook page.

“We are sharing with our community that we were targeted this morning by an individual who attempted to enter our building. At this time, we don’t know his intent; however, we decided to err on the side of caution to lock down the campus. 9-1-1 was notified of this incident,” and the Metropolitan Police responded to Temple Sinai, along with detectives from the counter-terrorism section.

“Metro and Henderson Police Department will be providing additional patrols for visibility and deterrence around our houses of worship this weekend,” the post went on to say. “We have alerted the relevant authorities, and we are taking all measures to keep our staff and community safe, including reviewing the security footage to see if we can get any further insight into this incident, and revisiting our security protocols for all locations where congregants, meet, work and learn.”

Shavuot programs went on as scheduled but with additional security.