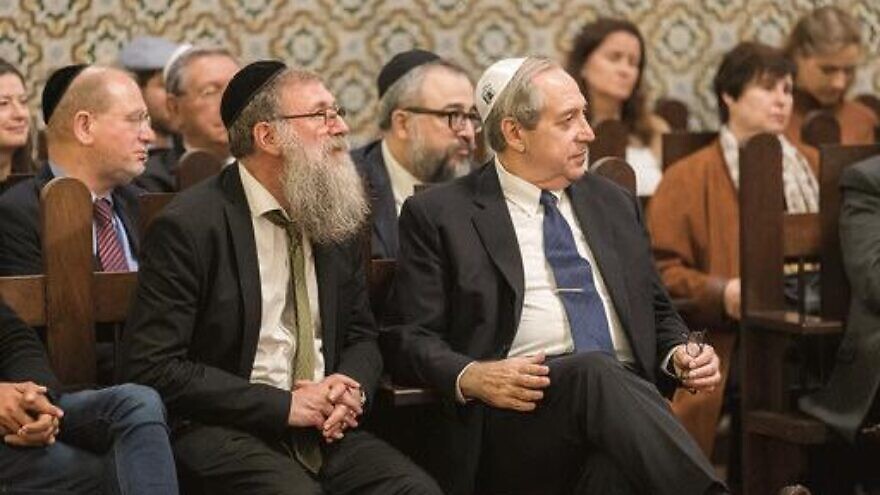 (September 29, 2022 / JNS) The Lisbon Court of Appeal on Tuesday revoked “coercive measures” against Daniel Litvak, the rabbi of the Portuguese city of Oporto. The restrictions were part of a campaign of anti-Semitic harassment against the community, its leaders claim.

The restrictive measures required Litvak to report three times a week to the Judicial Police and prevented him from leaving Portugal. The rabbi still must inform the police of his residence in Portugal and abroad.

“In summary, the Court says that the rabbi was arrested and insulted worldwide without any evidence,” Gabriel Senderowicz, president of the Jewish Community of Oporto, told JNS. “And the same happened concerning the incredible invasion of the Oporto synagogue, the community documents theft, the searches in the house of the directors, and the complete insult of the community during nine months.”

Senderowicz referred to actions taken by Portuguese authorities against the Oporto community, including invading Oporto’s Kadoorie Mekor Haim Synagogue, the largest synagogue in the Iberian Peninsula “as if it were a brothel;” searching the home of the synagogue’s vice president, Isabel Ferreira Lopes, “looking for bags stuffed with cash;” and arresting and detaining Litvak on suspicion of fraud.

Litvak was mistreated in prison, placed in a cell with a murderer and denied kosher food, forcing him to go more than 24 hours without eating, according to a complaint filed by the community with the European Public Prosecutor’s Office (EPPO) on Aug. 26.

Police actions were the culmination of an anti-Semitic smear campaign by public figures and members of the press against the community orchestrated by “agents of the state” opposed to the 2015 Nationality Law for Portuguese Sephardic Jews, Senderowicz said. The law grants citizenship to descendants of Jews expelled from the country in the 15th century.

The Oporto Jewish community was accused of running a racket by rubber-stamping citizenship certificates, said Senderowicz. “It was presented to the world as the sale of passports by a rabbinate who acted for money,” he said.

Senderowicz said the community has been subject to “anonymous denunciations made by state agents, professional slanderers and individuals” combined with a “murderous media campaign carried out by half a dozen journalists and influencers to destroy the credibility of a law, community leaders and people whose Sephardic origin had been certified in compliance with the law.”

The community denies any accusation of wrongdoing. Litvak received a degree of support from the Lisbon Court of Appeal. In its decision, it rebuked the Public Prosecutor’s Office.

The judges said the criminal intent attributed to the defendant’s conduct was based “on nothing.” It questioned the accusation that Litvak received kickbacks for issuing certificates of Sephardic descent, a necessary step to receiving Portuguese citizenship under the law, and the charge that he upheld false claims of Sephardic descent on behalf of applicants.

They referred to the charge as “a generalization without factual basis.”

The Public Prosecutor’s Office also failed to provide a “reference to a specific case, a false document, an undue payment or receipt, [or] an indication of the criminal scheme,” the judges said.

“How can someone defend themselves only from generalities?” the judges wrote.

“In light of the foregoing, it is clear that it is not even possible to get to the facts even by means of the evidence. It cannot be concluded … that the appellant has committed any of the acts that are attributed to him,” they concluded.